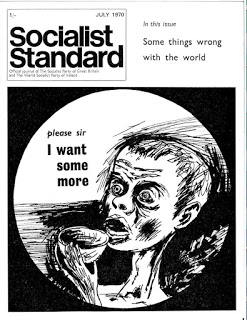 From the July 1970 issue of the Socialist Standard

The article ‘The Red Capitalist Class’ which appeared in the November 1969 Socialist Standard has brought some correspondence from Frank Collins of Wellington, New Zealand — the vice President of the Wellington-Taranaki Footwear Operatives’ Union and a member of the pro-Chinese New Zealand Communist Party. Mr. Collins was a member of a New Zealand Communist Party delegation which recently spent five weeks touring China and we publish some of his observations below:

I found this article very hard to see, though most interesting. But whose side is it on? — it must be one or the other.

I had the experience recently of a five weeks tour through socialist China. I saw nothing of the ‘old China’ like I once saw as a young seaman. Culturally much had changed — there are no beggars, no prostitutes . . . and no one trying to take you down. Rather I can state that living standards, housing and general conditions throughout the People’s Republic of China are on the rise. There is plenty of food, everyone is well dressed and shod by modern Chinese standards. There was no unemployment. I never saw an armed soldier or a policeman, only People’s Liberation Army men who are like the workers.

When in Shanghai I was told that the few 'capitalist roaders’ who had held power until 1967 boasted that the Cultural Revolution would fail in this city. There was no evidence that it had. It was the same in Peking and Canton, Changsha and Wuhan.

In six factories I visited I found that all were run by the workers themselves — by elected revolutionary committees of 12, 13, as many as 30, according to the importance or size of the industry.

I was impressed again and again by the relaxed methods in working by the workers — there was no hurry or bustle, no bonus or piece-work schemes in operation (which are the curse of the worker in the capitalist mode of production). As a result production had increased. Meeting with the revolutionary committees was something to remember! They answered questions freely, modestly and free from arrogance.

The worker in the factory receives medical attention for himself and family free of charge. The factory administration cannot sack a worker, whatever the circumstances. Should a worker in a factory wish to leave, he or she would have to apply to do so. Political education in Mao Tse-tung teaching is carried out in the factory’s time.

At the hostels where I stayed, this education is carried out by the staff — who, by the way, would be insulted if offered a tip.

With respect to China’s socialism, workers whom I spoke to were all of the one mind: that a socialist China was not possible unless Socialism was world wide.

What Mr. Collins says about the ‘new’ China is interesting — but proves nothing. It is common knowledge that China has changed a great deal since Chiang Kai-shek’s days but it should be obvious that one doesn’t decide that a society is socialist simply because there are no longer any prostitutes walking in the streets of Shanghai or because living conditions have improved.

Mr. Collins says that of six factories he visited they were all run “by the workers themselves—by elected revolutionary committees”. So what? If factories anywhere (in New Zealand, say, or in Britain) fell into the hands of workers’ committees tomorrow what would happen? Since workers at the moment all over the world are committed to capitalism, because they have not yet grasped any alternative method of organising society, these factories under ‘workers’ control’ would continue to produce commodities for sale. It would simply be a question of the workers driving themselves, holding their own whips, managing their own exploitation. The factories in China will be run on socialist lines only when the goods they turn out are no longer for selling on the internal and world markets and when the people working in them have no need for wages.

Mr. Collins also adds that all the workers he talked to understood “that a socialist China was not possible unless socialism was world wide.” We are glad to hear it — but this merely demonstrates that workers in China are in conflict with Mao Tse-tung's views. For example, Mao was writing in 1945 that Russia was a socialist country (that is, going along with the Stalinist myth of the possibility of ‘socialism in one country’):

Russian history has created the Russian system. There they have eliminated the social system of exploitation of man by man and have realised the newest type of democracy, namely the socialist political. economic, and cultural system. ('On Coalition Government’. Mao’s report to the Seventh Party Congress in 1945).

Then there is the question of ‘whose side are we on?’ Mr. Collins’ attitude to the so-called Cultural Revolution seems to amount to whole-hearted acceptance of the official Peking version —that this upheaval represented a united front of workers, peasants and Maoists struggling against the proverbial ‘handful’ of ‘capitalist roaders’. The Socialist Party of Great Britain does not agree with this. The ‘Cultural Revolution’ was comprised of two distinct elements. Firstly there was the power struggle between rival factions in the old leadership — Mao Tse-tung acting as the figurehead of one tendency and Liu Shao-chi playing the same role in the other, though doubtless the infighting was infinitely more complicated (and opportunist) than this simple collision of two groups suggests. This gave rise to a situation throughout China where for a time there was no unified political power and as inevitably happens under these circumstances, groups of workers and peasants used the opportunity to push ahead with their own demands. The Socialist Party of Great Britain is not aware of any workers’ organisation operating during the Cultural Revolution which was putting forward a completely coherent socialist analysis of China and the world, but there were plenty of examples of workers going much further in their criticism of Chinese state capitalism and in their proposals on democracy than any section of the ruling class was prepared to go. An outstanding case was the policy advocated by the Sheng-wu-lien movement.

The Ninth Party Congress marked something like the consolidation of Maoist control in China — with the leadership in the hands of Mao himself. Lin Piao, the amazingly durable Chou En-lai and the new men in the Standing Committee of the Politburo. Ch’en Po-ta (formerly Mao’s personal secretary) and K’ang Sheng (head of the secret police). Now that rival elements in the ruling class had been defeated it was time to smash organised working class opposition to Mao’s state capitalist regime. The traditional bogy of ‘left deviation’ (i.e. workers showing some political initiative) was resurrected and the slogans and declarations of the Cultural Revolution period were dropped, evidently because some working men and women were taking them seriously.

“Trust the masses, rely on them and respect their initiative’’, the Central Committee of the Chinese Communist Party had written in their Decision Concerning the Great Proletariat Cultural Revolution in August 1966. “Some units are controlled by those who have wormed their way into the Party and are taking the capitalist road. Such persons in authority are extremely afraid of being exposed by the masses and therefore seek every possible pretext to suppress the mass movement.” But when Chou -En-lai came in for criticism, wall posters immediately went up in Peking warning “the adversaries of Chou’’ against “any manifestation of opposition”.

“Party leadership should be good at discovering the Left and developing and strengthening the ranks of the Left; it should firmly rely on the revolutionary Left” had been the Maoist line during the Cultural Revolution, but now the official agitation is against “left extremism”— against the demand of some activists of the Cultural Revolution period who called for the ousting of the entire former leadership. Most spectacular of all has been the volte-face on the question of force. During the Cultural Revolution the official policy was that in order to “correctly handle contradictions among the people”, “any method of forcing a minority holding different views to submit is impermissible. The minority should be protected, because sometimes the truth is with the minority. Even if the minority is wrong, they should still be allowed to argue their case and reserve their views.” This is in evident contrast to the widely reported accounts of recent mass public executions. According to Tass, for example, nineteen youths were executed at a stadium in Peking on 27 January 1970 — because they were members of a left-wing opposition movement.

China is a capitalist country and, as always under capitalism, shows all the signs of a bitter class struggle in progress. Faced with a choice between the workers and the Maoist representatives of the ruling class, socialists have no hesitation in deciding whose side they are on.
Posted by Imposs1904 at 10:55 PM