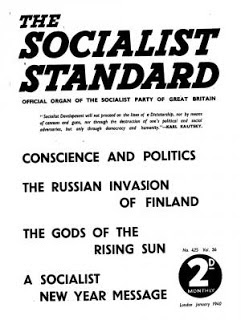 From the January 1940 issue of the Socialist Standard

The harassed householder knows too well the difficulty of obtaining a complete black-out; give it but the least excuse, and light will find a way.

The black-out of all thought not directed to “winning the war,” desired by Blimp & Co., falls, fortunately, far below their ideal, considerably below their expectation probably; it is hopeful that the working class generally has not forgotten 1914-18; the reflected light of those years alone helps to defeat the powers of darkness, squawking their hurdy-gurdy slogan, “God and King.”

It is hopeful that an increasing number of people are seeking a formula to justify sending Freddy Smith to well and truly find the bowels of Fritz Schmidt with the end of a bayonet. Priestly insincerities are availing less and less; the ambiguities and sheer contradictions of the alleged “Gospel of Peace” are becoming increasingly apparent.

Where, then, the “Inward Peace,” so plaintively demanded by a Matthew Arnold, a Peace born of Light and begetting Sweetness, a Peace lapped by the gem-like flame of Understanding —not, like the priest's “ Peace of God,” “passing” it.

Socialism alone has the answer. The Key was finally furnished for use by Marx and Engels. And it requires no learned treatises to master the handling of the Key; in fact, its straightness of outline, its very simplicity of form seems to preclude for many the beauty that should make us desire it.

The Socialist's reply to the decent, but be- muddled, religious C.O., to the sincere, the natively humane advocate of fighting Hitler, is: There can be no peace for you, "inward” or otherwise, while social inequality prevails. The fruit is bitter . . . delve for root; in short, look for causes.

Quinine was a potent foe to the effects of malaria—the dire disease can only be finally eliminated by drying up the homes of the malicious mosquito, which carries its own deadly injection needle; examples could be multiplied a hundred times.

Man is a social animal; individuals react to each other and to society generally on codes of conduct that have been created for them by ages of preceding thought and action. Such thought and action has been conditioned by material circumstances in the long run. “Vice” and ”Virtue” have pertinent content only in relation to a practically stable group; to seek “final sanctions” in some Divine Superman is to invite the worst injuries that witch-doctor, priest (and, finally, “ Leader ”) can inflict.

The leading "virtue” of the Arab was hospitality—the inhospitable desert demanded it. On the other hand, it is significant that “Punic faith” and Dutch “slimness” words of reproach separated by a thousand years and more, had a common explanation in the circumstances attached to two highly commercialised nations.

In the face of history, the chase after “eternal verities” in the field of human behaviour (“ethics") is sheer moonshine. The Egyptian priest blessed the union of royal brother and sister in “holy” matrimony—(Luther condoned a flagrant case of bigamy in his time and day); inquisition into the quite unreproved relations of the Ajaxes and Patrocluses of ancient Greece reveal startlingly divergent angles in “ethics" between the high civilisation of one day and those of another.  In short, history shows “vices” and "virtues” playing a rare old game of handy- dandy. Material circumstances pull the strings.

The greatest pull is exercised by economic conditions. Candid enquiry into the personal outlook of General Lee and Abe Lincoln will reveal in the former a charm that the latter was completely lacking in. Lee sincerely believed that slavery was a God-given institution (he really worshipped in the fane of "King Cotton"); Lincoln (who was prepared to condone slavery if the Union could thereby be preserved) was tied hand and foot by the interests of a highly commercialised North. Both appealed to God. It is interesting to recall that the Baptist North was anti-slavery, the Baptist South pro-slavery.

Let it be clearly stated that human effort (including thought) makes big contribution to material circumstances; only the very stupid or the blindly prejudiced will attribute to Socialist philosophy in this matter the nature of a kind of Economic Predestination.

In all ages there have been fine spirits profoundly disturbed by the evils attendant upon the social structure of their time. Jewish lore is full of noble aspirations. St. Augustine's ”City of God,” More's “Utopia” looked wistfully into a wish-fulfilled future of human happiness.

But it was reserved for capitalism to form the solid ground of harsh fact upon which could be based a scientific analysis of society, fraught with instruction as to future action for the utter and complete reconstruction of human relations which Socialism will entail.

The Socialist Party of Great Britain's warnings have been justified. The “Peace-loving” Russia of Communists and Labourites is now running true to ancient Muscovite tradition. Before this appears in The Socialist Standard, Hitler and Stalin may be definitely joining forces.

The S.P.G.B. respects any community that takes its stand against what it genuinely holds to be an abrogation of such personal liberty as may exist; it has no doubts as to the relative limited democracy of Finland and the ferocious tyranny of Stalin-land, but it keeps clearly in mind the fact that, short of Socialism, wars and rumours of war will persist; as a Party, its "advice” to the non-Socialist worker is that he should seek Socialist knowledge, and speed the day when the economic malarial parasites are dried up at the source.
Augustus Snellgrove
Posted by Imposs1904 at 8:06 PM

Another Augustus Snellgrove 'special' published under his pen-name of 'Reginald'. You've got to wonder how a person could sift through a Snellgrove article in 1940 without the aid of wiki and google is beyond me, but there's a definite 'dash' to his words.