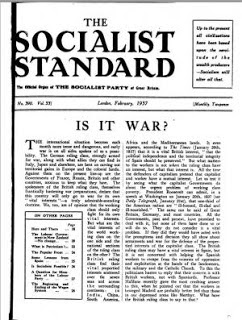 From the February 1937 issue of the Socialist Standard


(Reprinted from "The Socialist Standard," December 1915)

The answer depends largely upon the point of view. From one standpoint patriotism appears as the actual religion of the modern State. From another it is the decadence and perversion of a noble and deep-rooted impulse of loyalty to the social unit, acquired by mankind during the earliest stages of social life. From yet another viewpoint, that of capitalist interests, patriotism is nothing more or less than a convenient and potent instrument of domination.

Its Origin
The word itself, both etymologically and historically, has its root in paternity. In tribal days the feeling of social solidarity, which has now become debased into patriotism, was completely bound up with the religion of ancestor worship. In tribal religion, as in the tribe itself, all were united by ties of blood. The gods and their rights and ceremonies were exclusive to the tribesmen. All strangers were rigidly debarred from worship. The gods themselves were usually dead warriors. Every war was a holy war. Among the ancient Israelites, for instance, the holy Ark of Jehovah of Hosts accompanied the tribes to battle. It was this abode or movable tomb of the ancestral deity that went with the Jews in their march through the desert, and even to Jericho, playing an important part in the fall of that remarkable city. All the traditions of the Jewish religion, in fact, were identified with great national triumphs.

A Bond of Union
Thus tribal religion was completely interwoven with tribal aspirations and integrity. Tribal “patriotism" and religion were identical. Indeed, without the strongest possible social bond, without a kind of “patriotism" that implied the unhesitating self-sacrifice of the individual for the communal existence, it would have been utterly impossible for tribal man to have won through to civilisation. Natural selection insured that only those social groups which developed this supreme instinct of mutual aid could survive; the rest were crushed out in the struggle for existence. Is it a matter for wonder if it be found that such a magnificent social impulse, so vital to the struggling groups of tribal man, received periodical consecration in the willing human sacrifices so common in primitive religious ceremonial? Bound up with the deliberate manufacture of gods for the protection of the tribe and its works, there is indicated a social recognition of the need for, and value of, the sacrifice of the individual for the common weal.

A Bond of Another Kind
This noble impulse of social solidarity is the common inheritance of all mankind. But being a powerful social force it has lent itself to exploitation. Therefore, with the development of class rule this great impulse is made subordinate to the class interests of the rulers. It becomes debased and perverted to definite anti-social ends. As soon as the people become a slave class “the land of their fathers” is theirs no more. Patriotism to them becomes a fraudulent thing. The “country” is that of their masters alone. Nevertheless, the instinct of loyalty to the community is too deep-seated to be eradicated so easily, and it becomes a deadly weapon in the hands of the rulers against the people themselves.

Patriotism and Religion Part Company
With the decay of society based on kinship, religion changed also, and from being tribal and exclusive it became universal and propagandist. “Patriotism” at the same time began to distinguish itself from religion. The instinctive tribal loyalty became transformed, by the aid of religion and the fiction of kinship, into political loyalty. In a number of instances in political society, as in Tudor England, the struggle for priority between religion and patriotism became so acute as to help in the introduction of a more subservient form of religion. Thus patriotism became emancipated from religion, and the latter became a mere accessory to patriotism as handmaiden of class rule.

Patriotism Always Obliges
Though universal religion did not split up at the same time as the great empire that gave it birth, patriotism did so. The latter has, in fact, always adapted, enlarged, or contracted itself to fit the existing political unit, whether feudal estate, village, township, county, kingdom, republic or empire. No political form has been too absurd for it to fill with its loyalty. No discordance of race, colour or language has been universally effective against it.

What, then, is patriotism in essence to-day? It is usually defined as being devotion to the land of our fathers. But which is the land of our fathers? Our fathers came from many different parts of the world. The political division of the world in which we live is an artificial entity. The land has been wrested from other races. The nation they call “ours” is the result of a conquest over original inhabitants, and over ourselves, by successive ruling classes. Unlike the free tribesmen we are hirelings; we possess no country.

The One Common Bond To-day
Nationality, of which patriotism is the superstition, covers no real entity other than that of a common oppression, a unified government. It does not comprise any unity of race, for in no nation is there one pure race, or anything like it. It does not cover a unity of language, for scarcely a nation exists in which several distinct languages are not indigenous. Nor is it any fixity of territory, for this changes from decade to decade, while the inhabitants of the transferred territory have to transfer their allegiance, their patriotism, to the new nation.

The only universal bond of nationality or patriotism that exists for us to-day is, then, that of subjection to a single government. Patriotism in the worker is pride in the common yoke imposed by a politically unified ruling class. Yet it is this artificial entity that we are called upon to honour before life itself. This badge of political servitude is called an object worthy of supreme sacrifice. The workers are expected to abandon all vital interests and sacrifice all they hold dear for the preservation of an artificial nationality that is little more than a manufactured unit of discord: a mere focus of economic and political strife.

Ignoble Exploitation
Thus one of the noblest fruits of man’s social evolution—the impulse of sacrifice for the social existence—is being prostituted by the capitalist class to maintain a system of exploitation, to obtain a commercial supremacy, and preserve or extend the boundaries of a superfluous political entity. The workers are duped by the ruling class into sacrificing themselves for the preservation of a politico-economic yoke of a particular form and colour. Many so-called Socialists have fallen headlong into this trap.

Had social solidarity developed in equal measure with the broadening of men’s real interests, it would now be universal in character instead of national. The wholesale mixture of races, and the economic interdependence of the whole world, show that nationalism is now a barrier, and patriotism, as we know it, a curse. Only the whole world can now be rightly called the land of our fathers. Only in the service of the people of the whole world, and not against those of any part of it, can the instinct of social service find its highest and complete expression. The great Socialist has pointed the way. He did not call upon the workers of Germany alone to unite. He appealed to the toilers of the whole world to join hands; to a whole world of labour whose only loss could be its parti-coloured chains. And in this alone lies the consummation of that tribal instinct of social solidarity of which patriotism is the perverted descendant.

Capitalism the Barrier
Capitalism, therefore, stands as the barrier the destruction of which will not only set free the productive forces of society for the good of all, but will also liberate human solidarity and brotherhood from the narrow confines of nationality and patriotism. Only victorious labour can make true the simple but pregnant statement: “Mankind are my brethren, the world is my country.” Patriotism and nationalism as we know them will then be remembered only as artificial restrictions of men’s sympathy and mutual help; as obstacles to the expansion of the human mind; as impediments to the needful and helpful development of human unity and co-operation; as bonds that bound men to slavery; as incentives that set brothers at each other's throats.

Despite its shameless perversion by a robber class the great impulse to human solidarity is by no means dead. Economic factors give it an ever firmer basis, and in the Socialist movement it develops apace. Even the hellish system of individualism, with its doctrine of every man for himself and the devil take the hindmost, has been unable to kill it. And in the great class struggle of the workers against the drones, of the socially useful against the socially pernicious, in this last great struggle for the liberation of humanity from; wage-slavery, the great principle of human solidarity, based upon the necessities of to-day and impelled by the deep-seated instincts of the race, will come to full fruition and win its supreme historical battle.

A Vile Use of a Noble Sentiment
That is our hope and aspiration. For the present, however, we are surrounded by the horrors of war added to the horrors of exploitation, and subjected to the operation of open repression as well as to the arts of hypocrisy and fraud. With the weakening power of religion to keep the workers obedient, the false cult of nationality and patriotism is being exploited to the full. Like religion, patriotism has its vestments, its ceremonies, its sacred emblems, its sacred hymns and inspired music; all of which are called in aid of the class interests of our masters, and utilised desperately to lure millions to the shambles for their benefit. Thus is an heroic and glorious social impulse perverted and debased to the support of a régime of wage-slavery, and to the furtherance of the damnable policy of the slave-holding class: to divide and rule.