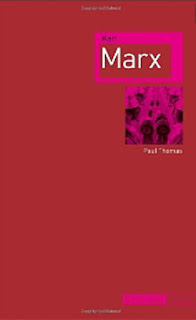 Book Review from the July 2012 issue of the Socialist Standard

This is a concise, though not always easy to read, exploration of Marx’s life and writing. It can be usefully compared and contrasted with Francis Wheen’s best-seller Karl Marx (1999), which is more accessible but less reliable. Biographies of Marx these days have to declare where they stand on Marx’s alleged illegitimate son. The sole source for this allegation is a typewritten letter supposedly written by the estranged wife of Karl Kautsky. It is claimed that it was written in 1898 but was only made public, in mysterious circumstances, in 1962. Wheen is in no doubt that the allegation is true because, he says, the circumstantial evidence supports it. Thomas on the other hand, after weighing up the evidence, concludes that the allegation sits somewhere between ‘strains credibility’ and ‘stinks to high heaven’.

In Thomas’s book there is picture of the philosopher Hegel, whom Marx, the accompanying caption claims, ‘stood on his head’. Marx actually claimed that he found Hegel’s philosophy to be already standing on its head and that he stood him ‘right side up’. In Hegel’s philosophy the real world results from the unfolding of ideas, whereas for Marx ideas arise from and interact within a specific material context. There is no discussion of Marx’s dialectic in the book, from which we must assume it is of no importance. Wheen, by contrast, repeats the common misconception that Marx’s dialectic is a form of logical syllogism: thesis, antithesis and synthesis. But this is precisely the kind of idealism which Marx had rejected after he had stood the Hegelian philosophy of his youth ‘right side up’. It is the understanding of material circumstances, particularly the economics of capitalism, which provides the ‘guiding thread’ for comprehending the world around us.

Both Thomas and Wheen argue that Marx’s legacy is still relevant today. It can also be argued that Marx’s ideas have never been put into practice, and an example of this is suggested by Thomas’s book. At the end of the Franco-Prussian War, in 1871, the Paris Commune was formed. The Commune was an improvised organisation of Parisian workers set up to run and defend Paris. The French army brutally suppressed the Commune and slaughtered at least 20,000 of the Communards. Marx had no input into the creation or running of the Commune and the Commune took nothing from Marx. Afterwards he did write The Civil War in France in defence of the Commune, and from this the press claimed (mistakenly) that Marx was the mastermind or strategist behind the Commune, conferring on him the title ‘red terror Doctor’. Marx for the first time became notorious – but for an event which owed absolutely nothing to him. So apart from the evidence of his own writings, there are historical grounds for arguing that Marx’s legacy has been misunderstood and unrealised.