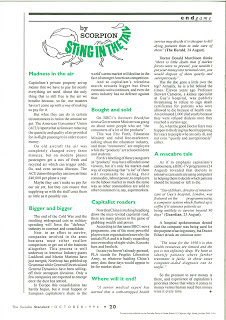 Madness in the air
Capitalism’s private property set-up means that we have to pay for nearly everything we need. About the only thing that is still free is the air we breathe because, so far, our masters haven’t come up with a way of making us pay for it.

But what they can do in certain circumstances is ration the amount we get. The American Consumers’ Union (ACU) reports that airlines are reducing the quantity and quality of air provided for in-flight passengers in order to save money.

On old aircraft the air was completely changed every three minutes, but on modern planes passengers get a mix of fresh and recycled air which can trigger colds, flu, and even serious illnesses. The ACU claims this policy can save airlines £40,000 per plane a year.

Maybe they can’t make us pay for our air yet, but they can ensure that supplying us with the stuff costs them as little as it possibly can.


Bigger and bigger
The end of the Cold War and the resulting widespread cuts in military spending will force the ‘‘defence” industry to contract and consolidate.

Now, in an effort to survive, companies involved in the arms business must either swallow competitors or get out of the business altogether. This process is well underway in America. Industry giants Lockheed and Martin Marietta have just merged. Northrop has gobbled-up Grumman while General Electrical and General Dynamics have been selling-off their aerospace divisions. Only a few companies arc expected to emerge once the dust has settled.

In Europe this consolidation has hardly begun, but it must happen or European capitalism’s share in the world's arms market will decline in the face of stronger American competition.

And so capitalism’s relentless march towards bigger but fewer economic units continues, and even the arms industry’ has no defence against that.


Bought and sold
On BBC1's Business Breakfast news a Government Minister was going on about some people who are “the consumers of a lot of the products”.

This was Eric Forth, Education Minister and rabid free-marketeer, talking about the education industry, and those “consumers” are employers while the “products" are schoolchildren and students.

Forth’s labelling of these youngsters as “products” may have offended some viewers, but it's only his market-mad way of explaining that “a lot” of them will eventually be selling their commodity, labour power, to employers on the labour market in much the same way as other commodities are sold to other consumers in, say, supermarkets.


Capitalist roaders
Now that China is rushing headlong down the once-reviled capitalist road, there are many players in the game of grabbing wealth and power.

According to that same BBC1 news programme, one of the most powerful players is an organisation known by the initials PLA and it is busily expanding into ownership of night-clubs. Karaoke bars and brothels.

In case you haven't already guessed. PLA stands for Peoples Liberation Army, so whatever battling China’s army does these days would appear to be for market share.


Where will it end?


"A senior medical expert has warned that a cash-strapped health service may decide it is cheaper to kill dying patients than to take care of them ” (The Herald, 24 August).


"there is little doubt that if market forces were to prevail, you wouldn't put your money into terminal care, you would dispose of them quietly and surreptitiously”.

Has the doc gone a little over the top? Actually, he is a bit behind the times. Eleven years ago Professor Stewart Cameron, a kidney specialist at Guy’s hospital, was publicly threatening to refuse to sign death certificates for patients who were allowed to die because of health cuts. An estimated 2,000 died yearly because they were refused dialysis once they reached a certain age.

So, what the good Doctor fears may happen to the dying has been happening for years to people who are only ill, and not even “quietly and surreptitiously” either.


A macabre tale
As if to emphasis capitalism's callousness, a BBC-TV programme (24 August) revealed that doctors in intensive care units are using computers in helping them to decide which patients should be treated or left to die.


"David Bihari, director of intensive care at Guy's hospital, London, was featured on the programme using a computer system which flashed up a coffin if it assesses patients as being unlikely to survive beyond 90 days” (Guardian, 25 August).

A hospital spokeswoman denied that the computer was being used for the purpose of saving money, but Doctor Bihari struck an ominous note:


"The issue for the 1990's is that health resources are limited and the pot is not infinitely deep. We have to identify patients where further treatment is futile. In these cases computer-aided diagnosis can be useful. ”

So the pressure to save money is there, and experience of capitalism’s priorities shows that when it comes to money versus human need then money wins it every time.