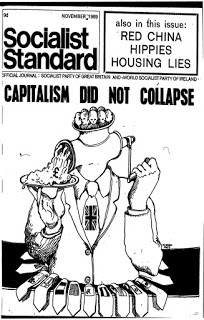 From the November 1969 issue of the Socialist Standard

In Northern Ireland today we have the following political organisations:


Apart from these organisations there are a variety of Labour groups, usually the product of some “personality” split and the various political apparitions that occur fairly regularly at election times. There are the physical force organisations like the I.R.A., the U.V.F., as well as a number of others which keep their guns behind their backs and whom the authorities are pleased to see from the front only. For good measure there is also the New Ulster Movement, a “moderate” organisation which came into being before the last Northern Ireland general election to assist O’Neillite candidates and which, before its recently-claimed “avalanche” of new members, following on the troubles, boasted a loosely-knit membership of 5,000.

Certainly the people of Northern Ireland would appear to have a specious political menu. But according to some people who have progressed letters to the press to the stage of informal meetings, the crying need for the Province is a new political party. What they want is a party of “moderate” opinion that can unite a cross-section of public opinion and banish the religious polarisation which, the exponents of the new party affirm, is at the root of Northern Ireland’s problems.

The point is worth making in passing that there already exists among the list of organisations quoted above a number who can justly claim to make such an appeal. The Labour, Liberal and National Democratic parties appeal across the class and religious board and accept the present economic system and the constitutional position of the Province within the United Kingdom. The New Ulster Movement, while allegedly to the so-called “right” of these organisations similarly appeals to “all classes and creeds” and offers itself as a political laboratory for the formation of what they believe will be policies aimed at speeding the progress of peace and prosperity in Ulster.

The point of all this discussion around the creation of yet another political party is based on the old failed notion that the problem in Northern Ireland is a political pot-pourri of religious bigotry and political prejudice, corrupt and incompetent government, uncooperative opposition, etc. Certainly all these factors exist but they can only exist within the framework of a social system that creates the material conditions—unemployment, slums, insecurity—on which they feed.

In other words, if the economic system under which we live, the capitalist system, in which wealth is produced for sale and profit and not for the satisfaction of human needs, could provide plenty for all in the form of jobs, homes and security the religious issue in Northern Ireland would be confined to the academic abstractions of the theological boffins. There would be no basis for discrimination real and imagined.

But capitalism has failed to provide a full and happy life for all, not only in Northern Ireland but everywhere else throughout the world. Politicians of all shades of political opinion have tried to control capitalism; they have used all kinds of political and economic devices to try and iron out its contradictions and make it function smoothly; they have founded new parties and concepts — they have even tried calling it “socialism” and “Communism” — but the system defeats their efforts. We don’t have to call on economic theory to prove capitalism’s innate contradictions and inability to function in the interests of all. The evidence of our contention stands blatantly forth throughout the entire world of capitalism: nowhere has capitalism, despite the fantastic development of its wealth producing techniques, solved any of the basic social problems that afflict humanity and, often, when some slight amelioration of these problems is effected by some puny scheme of social reform new problems are created, often greater than those at which the reform was aimed. The fact is that capitalism is a social system based on the exploitation of the overwhelming majority, the majority in fact that produces all wealth, the working class. This is the nature of the system and no form of political management can make the system run contrary to its nature.

Throughout the rest of the capitalist world, as in Northern Ireland, the competition among the working class for their needs in a system of organised scarcity becomes a weapon in the hands of politicians anxious to secure the support of the workers. Group features like religion, colour and ethnic origin are conveniently related to this competition by some politicians who accuse “them” of being responsible for “our” problems while other politicians disguise the real source of the problem by blaming it on the tensions, bigotries and prejudices induced by these bigots or racialists. The violence and bigotry we are witnessing in Ulster is not peculiar to the Provinces. Like the capitalist conditions that allow these features, they exist in one form or another where capitalism exists.

Having said this, if we now return to our list of political organisations we will note that with one exception they claim the ability to run, or contribute to the running of, capitalism’s system of buying and selling to the satisfaction of all. As, however, we have also noted that no political party anywhere in the world has proved equal to the task of solving even one of capitalism's basic problems, the claims of these organisations—and any new contenders in the field—amount to nothing more than an arrogant hope based on class interest or blind utopian stupidity.

The exception? Yes, there is one organisation on our list that does not make the claim that it has the ability, sincerity, wisdom and all the other qualities—claimed, by implication, to be the monopoly of the various contenders for political office—to run capitalism in such a way as to eradicate poverty, slums, unemployment, violence, etc. That organisation is the World Socialist Party.

On the contrary, the W.S.P. and its companion parties overseas, claim that, no more than all the other political parties could they run the present system to the satisfaction of all. Hence our struggle is not to win a mandate to run capitalism’s production for profit scheme, with or without amendments. Our struggle is to bring to our fellow members of the working class an understanding of the only alternative to capitalism, Socialism, and provide a revolutionary party for the use of that knowledge. We do not ask the working class to vote for us to reform capitalism; we ask them to vote with us to abolish it!
Richard Montague