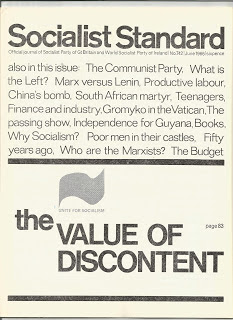 Mr. Abram Fischer, who was sentenced last month to life imprisonment on charges of conspiracy to commit sabotage and of being a member of the Communist Party, is the latest of South Africa's martyrs.

The South African Government have been gunning for Mr. Fischer for a long time. He defended Nelson Mandela and Walter Sisulu at the Rivonia trial in 1964 and, having broken his bail, has been on the run for over a year.

Now that the evil dictatorship has caught up with him he is likely to spend the rest of his life in gaol, for there is no remission in South Africa for political sentences.

Mr. Fischer made no secret of his membership of the Communist Party and gave his reasons at his trial:

. . . one is the glaring injustice which exists and has existed for a long time in South African society, the other, a gradual realisation . . . that it was always members of the Communist Party who seemed prepared, regardless of cost, to sacrifice most; to give of their best, to face the greatest dangers in the struggle against poverty and discrimination.

While it is true that in South Africa the Communist Party opposes apartheid—and suffers for it—it is impossible to think that Mr. Fischer does not realise that countries which are under Communist rule are in many ways similar to Dr. Verwoerd’s dictatorship.

There is strong evidence of the existence of anti-Semitism in the Soviet Union. Sharpeville was a horrible affair, but there have been similar outrages in, for example, East Berlin and Budapest.

Dictatorship and racism are features of capitalist society. They cannot be removed by joining one capitalist party in preference to another.

Abram Fischer has proved his courage and his sincerity, but we cannot ignore the fact that he is a tragically misguided man.


Gromyko in the Vatican

Another visible sign of the Soviet Union’s edging closer to the West was Mr. Gromyko’s visit to the Pope at the end of April.

This was the first-ever official meeting between the Kremlin and the Vatican. To mark the event the Pope gave Mr. Gromyko two Russian copies of the Schema de Ecclesia, which sets out the constitution of the Roman Catholic Church.

Perhaps he will need it. Russia’s split from China grows ever wider, which probably means that in the near future Moscow will be exploring more and more ways of making contact with opinion in the West.

This is a typical development in capitalism’s mighty international power game.

In the process of this development—and again this is typical—statesmen on both sides will have to forget a lot of what they said in the past. The Soviet Government and the Roman Catholic Church will have to forget that they were once hostile to each other.

All over the world Communist Parties will have to forget the days when they said, with Karl Marx, that religion was the opiate of the people.

They have, in fact, always been ready to compromise on this issue; there has never been anything to prevent a Christian joining the Communist Party.

Only last March the Communist Party in this country were protesting at religious attacks on them on television, which, they said, “. . . can only have the object of dissuading Christians from voting Communist."

If the Kremlin and the Vatican become bedmates, we may be sure the sheets will have been well aired for them by their faithful acolytes all over the world.


Getting away from it all

One way of doing this is to imitate Mr. Leonard Matchan, who recently bought the island of Brechou, in the Channel Islands. “For me,” he said, “It is going to be a means of getting away from the maddening crowd.”

The one big difficulty about this method is that it is rather expensive. Mr. Matchan, who is chairman of Cope Allman International, paid about £80,000 for his hideaway.

There is a cheaper way of getting solitude—one that is familiar to a lot of people.

In Leeds, for example, the police last year investigated 166 calls from people who were worried about old neighbours whom they had not seen or heard of for some days.

Forty-eight of these old people were ill or injured and needed help. One hundred and one of them had died— silent, lonely, unwanted.

So you see there are two ways of getting away from it all. One costs you a lot of money. The other costs you a lifetime of servitude and poverty as a member of the working class.

We are often told by well-kept politicians that we now live in a classless, affluent society.

The next time we hear that let us remember Mr. Matchan and his costly, tranquil island and let us contrast this with all those friendless deaths in the troublous city.

British Guiana, after a long and sometimes bloody struggle, is the latest colony to gain its independence from British rule.

The people there were promised a great deal about the supposed benefits of independence and, if they believed what their nationalist politicians told them, are now probably expecting some of these benefits to be coming their way.

They are obviously going to be disappointed.

In a speech on 8th May last the Prime Minister of Guyana, Mr. Forbes Burnham, summed up what independence will mean when he asked the people to sleep less (for six hours a day, he said), eat less and work more. His Government’s motto for progress will be “Work and harder work.”

Mr. Burnham also attacked what he called the “disgusting habit” which Guyanese workmen have of stopping work to shelter from the sun and the rain.

This is all reminiscent of the English Methodist protest, in 1764, that a theatre in Bristol would be “. . . peculiary hurtful to a trading city . . . and directly opposite to the spirit of industry and close application to business.”

In more ways than one, the emergent nations resemble England in the 18th century. If Guyana is to make its independent way in the world of capitalism its people will have to lose some of their leisurely habits.

Their lives will become more organised, more alienated and faster. They will be more intensely, more scientifically exploited. They will become, in other words, members of a modern working class.

In the name of freedom and progress they will have cast off one type of slavery and substituted another.

Good news for all lovers of militarism and destruction was that China detonated her third nuclear bomb—it may even have been a hydrogen one.

Good news, also, for all lovers of the distortion of words was that this latest test was described by Peking as "a great victory for the party’s general line of Socialist construction.”

Good news for all connoisseurs of hypocrisy was that the State Department condemned the test because of its effect on the atmosphere—as if the United States had never exploded nuclear weapons in the air, and as if they are not continuing to test the things underground.

The Chinese bomb is yet another lap in the desperate nuclear arms race which has been in progress since Hiroshima. As each new country joins the race it justifies its presence with lies about its concern for peace and world security.

And the countries who are already in the race always “deplore” and “condemn” and murmur about having a disarmament conference somewhere, sometime—because they are concerned about any threat to their dominant standing in the world.

China is a rising capitalist power, and she has paid for her entry in the race in the coin which all the others have used and which is the only one universally recognised—force.

If it were not so terrifying it would be laughable that this onward march to destruction should be called Socialism. We live now in a society of madness, in which the very words we use often lose all sense and meaning.

Happily, there is one band who work determinedly to keep the word Socialism sane and clean, and who will not have it confused with the terrorism and hypocrisy of capitalism.


Poor men in their castles

Who has not heard the lament, from mortgage-burdened worker or from high-climbing local politician, about the alleged opulence of the council house tenant? Wallowing in the luxury of a subsidised rent, polishing the Jaguar at the door, the man in the council house takes it easy while the rest are stripped bare to pay for it all.

Recently, however, The Sun gave a glimpse at another side of this popular story. In Leicester many workers have refused the offer of accommodation on a new £2 million estate because the rents are too high for them. These rents range from £4 18s. 0d. for a one-bedroom flat to £6 12s. 0d. for a three- bedroom house.

“It's fantastic,” said the chairman of the city’s housing committee. “This is one of the wealthiest cities in Europe with good wages and full employment.”

But this does not mean that Leicester’s workers are wealthy, nor that they do not suffer the poverty that their mortgaged brothers know too well.

In Paris a similar story. There, Government Social Security officials have found that families who have moved recently into new skyscraper blocks of flats are by no means living high. The new-found fascinations of a bathroom have led to heavy fuel bills to pay for a flood of baths.

This was bad enough, but even worse was the revelation that of two thousand women living in the fiats about one thousand were trying to pay the higher rents by putting in a bit of prostitution on the side.

The amenities of the skyscrapers may have cleansed a few Parisian bodies, but the difficulty of paying for them has stained some morals.
Posted by Imposs1904 at 11:32 AM