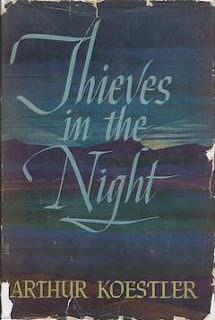 Book Review from the January 1947 issue of the Socialist Standard

“Thieves in the Night,” Arthur Koestler’s new book, has the sub-title, "Chronicle of an Experiment," the experiment being the foundation of a Palestinian Settlement. Actually the purpose of the book appears to be to tell us about Koestler's latest ideas hopes and fears, these being expressed through characters who are rather mouthpieces than individuals with a life of their own.

The scene of "Thieves in the Night" is laid in pre-war Palestine and opens with the arrival of Jewish refugees armed with tractors and fertilisers at yet another settlement, determined as always to make "the desert blossom as the rose," and to put to shame the miserable Arabs scratching the earth with a wooden plough. Both these intentions are realised. Meantime persecution of Jews in Europe proceeds apace, the British Government limits immigration into Palestine in 1939, and as a reaction Jewish terrorism breaks out. It is indeed a topical book!

It states the case for the Jews, more particularly the so-called Revisionists against the Arabs in a forcible manner. But even the editor of the "Jewish Standard" (the organ of the Revisionists of Great Britain) reviewing the book, feels that Koestler is a little unfair to the Arabs. The Revisionists are one of the very many sects or parties of Zionists, perhaps the most radical, who violently oppose partition and any form of compromise short of having the whole of Palestine for the Jews, with the Arabs as a minority. Vladimir Jabotinsky was the founder of the movement, and it is to him that the book is dedicated.

Koestler was a Revisionist in pre-war Vienna, and it would appear that he is par excellance a man basing all political aspirations on emotions and the whim of the moment, his sympathies moving as on a pendulum. In 1931 he joined the Communist Party and spent a year in the U.S.S.R. In 1936 he went to Spain as a journalist to cover the Spanish War. He was filled with indignation at the horrors of civil war and from it emerged "Spanish Testament.” His works, “Darkness at Noon" and the "Yogi and the Commissar,” portrayed his disillusionment with Soviet Russia and his swing away from the Communist Party. It was whilst he was enamoured of [the] Soviet Russia that he dropped Zionism believing that "Socialism,” though presumably by this he meant Russian State capitalism, would be the solution to the Jewish problem. This did not, however, worry his Jewish friends, who knew his pendulum-like temperament; Jabotinsky is reputed to have said, “he will return to the fold again.” He appears to have done so. Bauman, the Jewish terrorist leader of “Thieves in the Night,” says:—“We can’t wait until Socialism solves all racial problems. That will perhaps happen one day, but long before that day we shall have been exterminated ” (page 296).

Koestler has now concluded that Socialism is not the solution to Palestine's problems but it is not Socialism but merely his misconception of Socialism that is at fault. The Socialist Party of Great Britain did not make his mistake concerning the Russian revolution, hence it does not experience Koestler’s disillusionment, nor yet conclude that terrorism is the solution.

The Revisionists view Britain’s intentions in Palestine in a decidedly realistic manner. They realise that British capitalism requires Palestine as a Middle Eastern base, and wish to deny it to any potential enemy. They realise that no base is effective if the native population is definitely hostile. Their terrorist acts are based on the supposition that if the Jews in Palestine show themselves capable of waging war and thus make the use of the base untenable the British will fall in with their wishes and hand over Palestine to their control.

This does not, however, take into account the fact that the Palestinian Arabs do not stand alone, but are backed by the Arab Federation plus the might of Great Britain. A bloody civil war therefore is not unlikely if their present terrorism continues. Dissension also exists among the Jews. The Jewish Agency has pledged itself to reduce terrorism and it was reported in the Daily Telegraph (November 11th, 1946) that the Haganah, the Jewish defence organisation, had begun an underground war to suppress the terrorist organisations, the Stern Gang and the Irgun Zvail Leumi.

The real solution of the Jewish problem seems distant. It does not lie in terrorism nor yet in partition. The problem will remain while capitalism remains. The working class, whether they be Jews or Arabs, must free themselves from the chains of nationalism and tackle their class problem on the basis of Socialist understanding. Nationalism is a cloak that covers the real aims and interests of the ruling class of the major capitalist countries and is a hindrance to the development of a Socialist movement. International comradeship for a Socialist world may seem at the moment a long way off; but it must come if we are to survive. Koestler’s acceptance of terrorism as a solution to the problem of Palestine (and he appears to accept it as such, in this book) helps nobody.