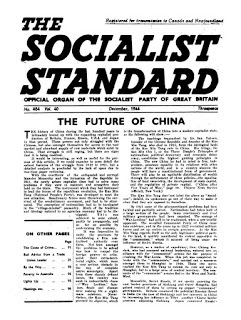 Give the Dogs a Thousand Lashes, Damme !

The mentality of some Tory M.P.s is weird and wonderful.

Thus we have Mr. D. Robertson (Conservative, Streatham) dilating on the idleness of the men employed on bomb damage repairs.

He mentioned a case of men who were brought to Streatham in luxury coaches from a hostel at 8 o'clock and went off to breakfast at 10 o'clock.
They should have had their breakfast before they left the hostel, but did not because they had lain too long in their beds. (Evening Standard, October 27th, 1944.)

"If this idleness continues,” declared Mr. Robertson, "I say put the young men into the infantry and let the older men have a spell of unemployment.”

There for you! The young men can smash more houses up in the Army and the older ones do nothing! How Mr. Robertson can imagine this is going to put anyone's roof back, we can't think!

One or two members of the Socialist Party working on war damage repairs in South London have a suggestion; they propose that Mr. Robertson have a week off from the House of Commons and take a turn on the roofs down in Streatham. He won't do much work, of course, but it would give him a marvellous appetite for those wonderful dinners they serve in the Commons restaurant. Perhaps he might feel like lying in his bed Sunday morning as a result; he wouldn’t have to be at the House, anyway, for they don't sit Saturdays or Sundays.

Our comrades say they are quite willing to do a week in the House of Commons for every day Mr. Robertson gets his hands dirty down at Streatham.


Trouble Down on the Farm

As if in answer to Mr. Robertson, the Norfolk War Agricultural Committee has informed the London Star (November 4th) that the Italian prisoners are rather difficult.

When they are slack, lazy or disobedient we can report them to their camp, but what happens? They may get a spell of detention, but while they are away doing their punishment the farms are deprived of their services, indifferent though they may be.
We have also found that punishment does not seem to improve them. As a fact, a spell of detention does not have any salutary effect on them, neither does it seem to have any terrors for them.
And when they return to the farm they are worse than ever. The result is that the farmers will not report them for minor breaches of discipline.

And these are the boys we went to Italy to “liberate”!

There is probably no more efficient dictatorship than General Chiang Kai-shek’s party.
There are secret police, concentration camps and firing squads for those who dare to speak, write or act out of turn. (Daily Mirror, November 1st, l944.)

Come, come, Thorburn! Chiang may be more efficient than Hitler—but not more than .Marshal Stalin!.

He also says the Chinese are not fighting the Japs at all—but one another.

We give it up!


A General Tells About the Cause of War

There is a universal hope that after the war the great nations will get together and solve the international problems of trade and currency, and thus eliminate unemployment and poverty. This would remove the main causes of world wars and the need for large fighting forces. (Evening Standard, September 27th, 1944.)

Unemployment and poverty are not solved by trade or currency reorganisation, but the worthy General is certainly getting rather warm on the causes of modern war.

Perhaps, as he has retired, now he can write this sort of thing. We can’t imagine General Montgomery telling his troops that the war is caused by unemployment and poverty, though.

Virtue is its Own Reward

“It seems clear that any sum voted by Parliament must considerably exceed the £585,000 of the last war,” says one London evening paper (Star, September 7th).

Oh! quite clear! And most essential to cut down on expenditure for the rank and file to do so. Those who lose limbs will lie supplied with mass-produced standardised “Woolworth” arms and legs—free of all charge. Better artificial legs—for the benefit of the workers.

Have Your Holidays by Hypnotism, says Doctor.
Tired and jaded war workers can have all the invigorating benefits of a seaside holiday without ever going near a beach. It can all he done at home—by hypnotism.
So, at least, says Dr. Alexander Cannon, of the Isle of Man, former psychiatrist to the L.C.C. mental hospital service.
Dr. Cannon suggests the hypnotism may be based on a wavelength in some way common to the length of the so-called short wave.”
“The tired and worn-out worker in this dreamland of hypnosis,” he says, “can be made to walk along the seashore on a warm, sunny day, with a cool, refreshing breeze, and to feel the magnetic power being drawn in through the palms of his hands and the soles of his feet as he leisurely walks until he feels wonderful.”
“Having allowed this dream picture to be implanted in his mind for a period of from twenty to forty minutes,” the doctor adds, “the worker can then be awakened with no recollection of his dreamland tour but with a feeling of energy, power and revitalisation which may last anything from one to four weeks or longer.”

So this is where “psychology” has got us to. Starting out with telling us that the cause of the trouble is our repressions, going on, like Max Eastman, to inform us that the reason Karl Marx expounded scientific Socialism is because be wanted Hegel for his father, finishing up with fortune telling and psycho-analysis.

We are quite amenable to the idea of having this dream implanted on us if Dr. Cannon will undertake to implant one on our guv'nor on the same terms—viz., are will go away to the seaside for twenty minutes in our dreams, if he (the guv'nor) will agree to dream that we’ve done a week’s work and pay us for it (in real money --not dreams).

We gather from the Socialist Appeal (September) that the quashing of the sentences of imprisonment passed on the members of the Revolutionary Communist Party is “one of the most important legal victories in the struggle against anti-labour legislation” which the working class has gained.

We must confess to some mild surprise. For ourselves, we have always held that the only real “legal victory” was when the working class captured the machinery of government (including the armed forces) by voting themselves IN and the boss OUT, which would enable them to enact and enforce laws.

Are we to understand that “revolutionary” Trotskyists have now forsaken armed insurrection and direct action for pleading at the bar of (capitalist) justice?

Every week the New Statesman awards five shillings for the most idiotic statement published in the Press sent in by its readers.

We submit the following :—

Somebody should now get up, as they did in 1940-41, and point out that Southern England is part of the same battlefront as Normandy, and that the toughest part of the war is still to come. If the German threat to send rocket shells does mature, something of the sort will have to be done. I believe the response would be much as it was in 1940—production would increase and so would popular resolution. We should in our hearts all rejoice that in this war we are not “sending our sons” only, but sharing in some small way in their risks. (New Statesman, July 1st, 1944.)

Reference has already been made in these colmuns to the new insecticide, D.D.T.

It is stated that this new compound has already stopped an incipient typhus epidemic in Naples, and been used with deadly effect on bugs, fleas, cockroaches, beetles, moths, lice and mosquitoes.

It is a great preventative of malaria and dysentery. British troops now have a standard issue of D.D.T. impregnated shirts which effectively protect the wearer against lice for two months even after regular washing. (Times, August 2nd.)

It will be available to civilians after the war. So. perhaps, ends the career of some of the greatest pests of poverty-stricken workers—their poverty, however, will remain.

D.D.T. was discovered by an obscure German student chemist employed by the Basle firm of J. R. Geigy in 1874.

It lay dormant until 1942. when the British branch of the Geigy Company brought it to the notice of the British Government. What became of the inventor is not known.

“The reason given on Thursday for the dismissal recently of 1,000 war workers, 900 of them women, from a factory in the West Riding of Yorkshire was that the country is so overstocked with shells that to get rid of them, firing day and night, would take two years. “Two hundred workers are reported to have been dismissed by another Yorkshire firm, but all the 1,200 are said to have been absorbed by engineering concerns in Bradford and Leeds or given jobs as conductresses on buses in these two cities. About fifty have been permitted to return to their peace-time jobs in the textile trade.”—(Manchester Guardian, November 11th, 1944.)

“Frank statements about the methods of some medical men are made to-day by Dr. Andrew Kefalas, of Sheffield. After pointing out that one reason why many people go to the chemist instead of the doctor is that they cannot afford to pay both, he says this in the British Medical Journal:
There is a more ugly side to this scandal and that is that so many of us neither prescribe nor dispense at all. We simply dope out stock mixtures.

Cutting the Cards.
For myself, I would, in case of illness, as soon lay out at half-dozen patent preparations, select one of them by cutting a pack of cards, and take my chance on the one which turned up, as swallow some of the  'mist this' and ‘mist that' which are foisted upon the people who chance the doctor instead of the chemist.” (Evening Standard, September 12th, 1944.)

“Britain as a nation is not ready to have victory granted to her,” says Rev. A. M. Hay. of St Paul's, Braintree, Essex, “and that is why the weather—God's weather— has been almost persistently against us since D-Day.”
Writing in the church magazine, he says: “If there is any doubt that we are not ready for victory, let us ask ourselves how are the majority of people in onr land preparing to celebrate? With revelling rather than with humble thanksgiving.”
Mr. Hay told the Daily Mirror last night: “It was God's good weather at Dunkirk and in the Battle of Britain that saved us.
“I believe strongly that God uses the weather as an instrument in his moral government,” Mr. Hay added.