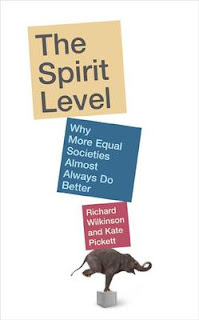 The main theme of this book, as summarised in its subtitle, is that people living in less unequal societies almost always do better than those living in more unequal societies. This unsurprising theme is spelled out in the nine chapters in the middle part of the book dealing with the costs of inequality in various areas of life and society: community life and social relations; mental health and drug use; physical health and life expectancy; obesity; educational performance; teenage births; violence; imprisonment and punishment; and social mobility.

The first part of the book—titled Material Success, Social Failure—is an uncontroversial, even anodyne commentary on where we are now. Material success is a privilege of the minority: “the least well-off people even in the richest countries sometimes find themselves without enough money for food.”

Socialists are more likely to be interested in what the authors have to say in Part 3, A Better Society. Wilkinson and Pickett present themselves as good people with good ideas writing of the “need to create more equal societies able to meet our real social needs.” I particularly like the cartoon they reproduce of a rich, portly father explaining to his small son, “It goes in cycles, Junior. Sometimes the rich get richer and the poor get poorer. Sometimes the rich get richer and the poor stay the same.”

But the authors are really not as radical as they pretend. They like the charitable, friendly society, mutual, credit-union side of capitalism more then the openly profit-seeking side. They want a nice capitalism, not a nasty one. So when it comes to “what can be done?” they list reforms like “plug loopholes in the tax system, limit ‘business expenses’, increase top tax rates, and even legislate to limit maximum pay in a company to some multiple of the average or lowest paid.”