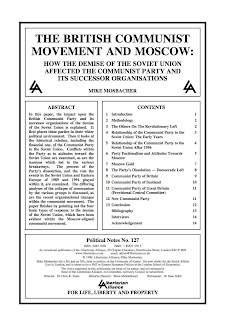 Book Review from the January 1998 issue of the Socialist Standard

Have you ever wondered what became of the Communist Party after the collapse of state capitalism in Russia and East Europe? This short pamphlet will tell you.

The official Communist Party – or Communist Party of Great Britain, to give its full name, by which it was only known on formal occasions and in an international context – in effect dissolved itself in 1991 when it changed its name to Democratic Left and became a trendy left green-feminist-gay pressure group. Its previous policies, however, were kept alive by the Communist Party of Britain (CPB) which broke away in 1988 and which still publishes the Morning Star. In Scotland another group of ex-CPers set up the Communist Party of Scotland in 1992. An earlier breakaway in 1977, the New Communist Party, still exists but has become, according to Mosbacher. little more than a group denying the atrocities that occurred under Stalin in the same irrational way as Nazis deny those that occurred under Hitler.

Immediately after the CPGB changed its name to Democratic Left in December 1991 this name was taken up by a group which had no historical, political or, for that matter, legal right to do so. The organisation that goes under this name, and publishes the Weekly Worker, is in fact a super-Leninist sect, apparently originating as a splinter from the Turkish Communist Party, which employs the same unscrupulous tactics of infiltrating other organisations (at the moment Scargill’s SLP) as the Trotskyists; indeed, according to Mosbacher, it does have Trotskyist members.

Mosbacher, surprisingly perhaps for a supporter of the mad free market ideas of the Libertarian Alliance, has produced a useful and well-informed little pamphlet. He gets our position right too when he states:


“The Socialist Party of Great Britain takes the view that the Soviet Union never was socialist in the first place. This has been its position since 1917. In a way this party goes further than any other on the revolutionary left in criticising the Soviet Union, in that it views Leninist principles and modes of organisation as non-socialist, indeed anti-socialist”.