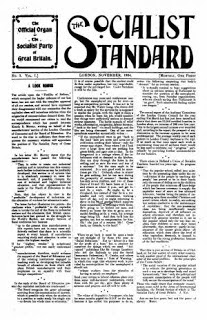 From the November 1904 issue of the Socialist Standard

On Sept. 13th last at Toynbee Hall you delivered an address on the question of the unemployed. At the conclusion of your address I expressed my opposition to the proposals suggested by you, but the time at my disposal was not sufficient to enable me to fully demonstrate that not only were your suggestions worthless but that the policy advocated would ultimately result in effects disastrous from the point of view of the organisation of the working-class.

The whole tone of your address was pessimistic. You commented on the ignorance, apathy, and indifference of the working-class. You even went so far as to express a feeling of being tired of talking to them, attending conferences to discuss questions, while at the same time the people outside those conferences gave no thought to their own condition. Unfortunately, a good many others by adopting the process of reasoning employed by you have also been made tired, and the wonder is that more have not grown weary and fallen by the wayside, taking into consideration the fact that the working-class has never been taught to act consistently and logically in the political field in accordance with their industrial and social position in society.

I have not space enough to enter into all the inconsistencies and contradictions to which you gave utterance on that occasion; but certainly some of your observations if pursued to their logical conclusion, would place you in a position far different from that which you occupy at the present time. For instance, you stated in relation to the problem of working-class unemployment, that if anything is to be done only the workers themselves can do it. Assuming you mean that whatever action they take should be political, I cannot but agree with you. Where, however, you did not express yourself clearly, and where we differ is that any effort, either for the immediate alleviation of suffering and distress arising out of the present constitution of society, or in the direction of the total abolition of these evils, must be the conscious action of those who are suffering, viz., the working-class.

Posing as a Socialist as you do, you are of necessity forced to fall back on the Marxian explanation of the cause of unemployment. This you substantially did by showing that the application of science to production, the invention, development and speeding up of machinery, used for the sole purpose of creating profits for the possessing class, must inevitably result in the displacement of hand labour and the throwing on the labour market of increasing numbers of unemployed workers. You further pointed out that the evil of unemployment, arising as a consequence of this process, is growing to such an extent that thousands of workmen are forced to eke a precarious existence by either cadging or living on their friends, a condition in which they lose their manhood and drift into mental and moral degeneracy. In all this I am in agreement with you, and could, if space permitted, go further into this aspect of the Social question; but, Sir, what I wish to call your attention to is the fundamental constitution of society itself, and to indicate how all efforts at changing the effects of a system must be abortive as long as the system itself remains unaltered.

Throughout civilisation to-day, notwithstanding national and political differences, the basis of the social system in every country be it a republic or a limited or unlimited monarchy, is the ownership by a class of the means whereby the people live. As long as class ownership exists the people will be confronted not only with the unemployed problem but with the thousand-and-one evils that afflict the social existence of the working-class at the present time.

While the workers possess nothing but their physical and mental energy ; while that energy is bought and sold in the Labour Market, subject to laws which dominate alike the capitalist and the worker; while the operation of these laws involves a continual decline in wages, the price of labour power, so long will the working-class suffer from poverty accentuated at intervals by sickness and unemployment.

The Capitalist form of society, that is, Capitalism, does and can only exist to the detriment, degradation, and demoralisation of the working-class. The capitalist-class has its representatives in the Government, local and national, and uses the legislative and administrative boards as pliant tools for the protection and promotion of its class interests, for the maintenance and extension of class domination, and for the further robbery and enslavement of the working-class. If, then, this is the economic function and political role of the capitalist class, what have the workers to expect from the present-day rulers of society ?

You, Sir, and those who think with you, in directing the attention of the working-class to the political representatives of the master-class for relief from the misery which is crushing them, in holding out to them the prospect or possibility of amelioration through the good grace of the ruling faction, are incurring a serious responsibility. Promising the working-class something that must inevitably fail is the fruitful source of that apathy and indifference in which the workers are sunk to-day ; telling the workers they have gained victory when it is only a victory for the capitalist-class, entrenches the ignorance of which you complain; and calling upon the capitalist governments to undermine their own position, which must be the case if any measure of material value to the working-class is put into operation, creates that pessimism in the minds of the workers that you so much deplore.

Now, Sir, The Socialist Party, of which by the the way you are not a member although calling yourself a Socialist, exists to teach the workers their true position in society, and to create the political weapon whereby alone that position can be altered. The mission of The Socialist Party is to show the workers that Capitalism lives on their wretchedness and prostitution, and that, if their emancipation is to be accomplished, they must adopt a political attitude necessarily hostile to all other political parties. Outside The Socialist Party, the Party of unqualified Socialism, the Party of the Working-Class, all other political parties uphold and safeguard the interests of the capitalist-class and the continuance of the wage system which is responsible for not only the unemployed but the other evils that afflict society. The Socialist Party is the political expression of the material interests of the working-class for whom there can be only one policy and one programme, that is the control through public ownership of the tools and machinery for producing the necessaries and comforts of life, to be achieved by the political action of the working-class, cognisant of of the causes of its suffering and wretchedness and conscious of its material interest and historic mission.

The time is fast approaching when the working-class of Great Britain will recognise the value of the political machine as an instrument of offence and defence in class warfare, and when that time arrives the working-class will use that weapon conscious of its power and conscious of its use. The working-class will no longer be humbugged as The Socialist Party is spreading the enlightenment which will dispel the confusion existing in the minds of the workers, and its fearless advocacy of the cause of the disinherited will succeed in stimulating the intelligence and arousing the enthusiasm cf these who are apathetic and indifferent to-day. Any other policy, that, for instance, pursued by you, can have only one result, the division of the working-class into two sections, one of which,, like yourself, saturated with pessimism, is driven into the camp of Liberal reaction, and the other possessing only an inkling of the truth, gravitates in the direction of anarchism, a result in either case disastrous to the organisation of the working-class.

In conclusion, Sir, let me say that I give you credit for being honest, an opinion which I would hesitate to express regarding most men known as "Labour Leaders." But honesty without correct thinking, is of no use to the working-class, and if you can see no policy other than that which you are advocating at the present time, I say in all sincerity, lay down your arms, and acknowledge defeat, for in my humble opinion you will be doing more by remaining silent than by carrying on the conflicting and confusing propaganda your discourse of 13th September.

Since writing the above I have seen the report of the conference held with Mr. Walter Long from which, as might be anticipated, it does not appear that the promise held out by the President of the Local Government Board is very encouraging to you and those who went with you. I see that Will Crooks, who in the House of Commons advocated reafforestation and reclamation of waste coast line to teach the unemployed a sort of agriculture and to fit them for subsequent deportation to Canada, could only express his gratitude to his capitalist masters by moving a vote of thanks to Mr. Walter Long for condescending to come and confer with the public bodies represented at the meeting. What occurred at this conference will occur at any others that take place, and the only result will be that you and others will get tired of attending them. "Hope deferred maketh the heart sick"
—W. W.

"William Woodhouse
East London branch. Woodhouse was an early Party speaker and a member of first Executive Committee. He resigned on 15th November 1904 as he was emigrating to the USA. In 1901-3 he had been secretary for the SDF Poplar branch.
"