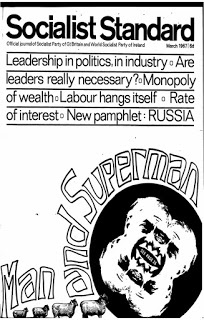 From the March 1967 issue of the Socialist Standard
This, as the newspapers never tire of telling us, is the age of progress and enlightenment; which means, among other things, that every little girl and every little boy in the schools is taught that to worship idols is evil. Of course, this applies to only one sort of idol. Those same little girls and boys are also taught, in those same schools, that to worship leaders is virtuous.
The leadership principle is one of the pillars of property society. The vast majority of people are convinced that the world is so full of complex and dangerous problems that only a few can be expected to have the knowledge, the ability and the courage to deal with them.
This select few are the leaders. There is even something called a “born” leader, although when we consider the properties leaders are supposed to have it is reasonable to wonder whether they can be said to be born like the rest of us.
For the most part, the working class accept it all. The nearest they come to criticising is to complain about the quality of the leadership they suffer, and to pine for stronger or weaker, or abler, or some other type of leadership. Just see how enthusiastically they react whenever a great man drives through the streets. Study their smiles, a mixture of joy and amazement, when he proves that he is human by getting out of his car and coming across to clasp hands with them.
No shadow of doubt can be seen on those happy faces. None of them is asking what a leader is supposed to be, to do, to be worth. So let us, the minority who do not accept the leadership principle, ask the questions.
A leader, first of all, is supposed to be someone who does things which are good for us. His intentions are supposed to be of the best and under his wise and humane guidance we should flourish into prosperity and happiness. But it is at once obvious that, to put it at its mildest, this is not always so. To take the plainest of recent examples, whatever intentions lay behind Hitler’s rages, or Stalin’s level eyes, they were not inspired by the greatest good of the greatest number.
Of course when it was convenient for them, the allied leaders made great play on the evil results of the Hitler and Stalin tyrannies. This propaganda was acceptable to those workers who console themselves with the notion that all evil leaders are foreign. It ignores the fact that, at the same time as the British leaders were condemning the Nazis’ savagery, they were themselves indulging in delicate operations like arguing about which of them had correctly calculated the number of houses the RAF could destroy in their attacks on German cities.
Now the whole point is that if it is possible for a leader to be a murderous tyrant, if a leader can act against human interests, the case for having a leader is severely damaged. If leadership is a sort of lucky dip, with a good chance of coming out with a Hitler, then there is a strong argument for not sticking our hand into the bran tub.
Whether a leader is “good” or “bad”, one quality he should have is to know more than his followers. Some leaders, of course, assert that this is all done by intuition. There is no argument in favour of leaders unless they know better than anyone else. How do our leaders match up to this?
Harold Wilson is a leader who, if anyone, should know almost everything about economics. If anyone can control capitalism’s ups and downs it should be one-time economics don Wilson. Yet ever since he came to power he has been bleating about the uncontrollable, unpredictable surprises which capitalism keeps giving him. The ship, Wilson told us last July, had been suddenly blown off course which was an admission of his impotence to control events. Is there any point in having leaders, if they have to make such confessions?
We can get an idea of how much at sea Wilson the leader is, in what should be his specialist subject, by what he said in the House of Commons on February 7 last:

Mr. Heath: What is to be the rate of growth this year? Mr. Wilson replied that he would not like to forecast that, any more than any other Prime Minister has done. (Daily Telegraph, 8.2.67.)

Here is Wilson admitting that he cannot say what the rate of economic growth, a matter which he is tirelessly telling us is one of his government’s first concerns, is going to be. In other words, that no matter what sort of a leader we have capitalism is unpredictable, that it can blow up sudden storms or settle into unexpected calms. Leaders can amass all the facts possible, they can adopt what pretence they like. When it comes down to it they have to admit that events are beyond their control.
This is what provokes what are sometimes called leaders’ “mistakes” but which might have other descriptions. Indeed, history is littered with examples of politicians’ broken promises, misguided calculations, discredited forecasts.
Consider, for example, one of our present leaders' favourite brainchilds—the Selective Employment Tax. This tax was carefully worked out by the economic experts—those men who have all the knowledge humbler people cannot hope to absorb—to have certain effects. One of these was clearly to rake in some of the profits from a sector of industry—the service trades—which had escaped heavy taxation. And as a result of this, it was expected that the service trades would unload a lot of their employees, who would find their way into manufacturing industry.
But, according to the Guardian’s Labour Correspondent (13/1/67), the opposite has happened:

Full time employment in the service industries has increased. . . . Employers have tended either to employ part timers for less than eight hours a week and thereby avoid the tax or to seek better value for money . . . by hiring more full time workers.

Perhaps one day soon SET will be written off, as other favourite schemes have been, as a simple mistake. But we should remember that leaders ean err in other fields. Edward Heath, for example, has for a long time been under fire within the Conservative Party because some Tories think he is constantly making mistakes in leadership. It is fair to ask if leaders are worthwhile if, apart from anything else, we are liable to get one who does not even know how to lead.
Heath, of course, is likely to stay loyal to the Tories, who have a reputation which many a Labour man might envy for keeping up appearances in public whatever is going on behind the scenes. It is not taking things too far to say that the Labour Party, such has been their history, have developed a veritable neurosis about treacherous leaders.
Ramsay MacDonald is long dead but his ghost still walks. Since he double-crossed his party, every other Labour leader has been closely watched for signs of his doing the same thing. Nervously, Labour M.P.s are always on the lookout for symptoms among their leaders of MacDonald's vanity, his contempt for his followers, his taste for high society. Many a Labour leader since 1931 has been compared to the arch traitor.
But no M.P. has ever wondered whether, if it is possible for a leader to damage his party by being a traitor to it, it is worthwhile having them. None has ever asked himself if he would sleep the easier for knowing that he was no longer in the hands of someone who might turn over to the other side. (And how MacDonald damaged the Labour Party by his defection!) The Labour Party prefers to keep its leaders, to watch and worry and, when the betrayal comes, to wail.
The case against leadership in principle, then, is formidable. Leaders can be ruthless and inhumane; they can be as ignorant as anyone else; they can make massive mistakes; and they can betray what their followers have always thought of as their principles.
So why keep them? The simple answer (although this may seem presumptuous) is that the existence of leaders reflects the ignorance, the apathy, or the delusions, of the people who follow them. Since we have mentioned MacDonald we may as well take him to prove the point.
For a long time MacDonald has been the Labour Party's Satan but at one time he was its God—and the faithful are not expected to criticise the Almighty. Even before MacDonald formed the National government, he had denied all his party had ever stood for; what was the attitude to this, among the Labour Party at the time? This is how Michael Foot, in his biography of Aneurin Bevan, describes it:

. . . the authority of 'the Big Five’ remained to the end unshaken, almost undented. A few in minor offices, the Attlees and the Daltons, might utter their doubts behind cuffed hands, but at the party meetings they played loyally in the team and pledged their support to the irreplaceable captain.

Now these people who were either being duped, or were allowing themselves to be duped, by MacDonald, were all themselves Labour leaders. They were all experienced—some of them hardened—politicians. Yet until MacDonald himself walked out on them they supported him. This is a perfect example of a leader living off the political ignorance of his followers.
One aspect of this, ignorance is the confusion over the meaning of leadership. Many people think that anyone who has a special knowledge and who applies it to the rest of us— like a doctor—is in that fact a leader. We don't know enough to treat ourselves, runs the argument, so we have to rely on the doctor to do it for us. That makes the doctor a leader which proves that we cannot exist without leaders.
Yet there are limits beyond which a doctor's special knowledge cannot be applied, because our knowledge makes us question him. If, for example, we went to our doctor with a poison toe and he started preparations to lance our finger we would probably get in touch with a couple of his colleagues to have him certified. (Perhaps it is no coincidence that Harold Wilson once said his favourite image of himself was as the people's family doctor.)
For some reason, the working class do not apply these same standards of judgement to politicians. A doctor who sometimes murdered his patients, who confessed to a lack of medical knowledge, who kept performing the wrong operation and who ended up working for the undertaker would soon get what he deserved. Yet political leaders who carry on in the same way remain on their pedestals, in their offices.
All that is needed to end this is some basic knowledge. Not very much; only the equivalent of knowing that the doctor is treating us for the wrong complaint; only enough to tell us that the society we live in now does not work in our interests and that to get rid of its evils we must fundamentally change it.
With that knowledge, workers are impervious to the promises, the deceptions, the mistakes and the treachery of leaders. They have no need of leaders to tell them what to do; they have the essential equipment to build the new society where people count.
Ivan
Posted by Imposs1904 at 9:54 PM

That's the March 1967 issue of the Socialist Standard done and dusted.

I'd like to thank the following four albums for helping me get through the scanning, proofreading and general tearing my hair out whilst dealing with a keyboard that no longer loves me: