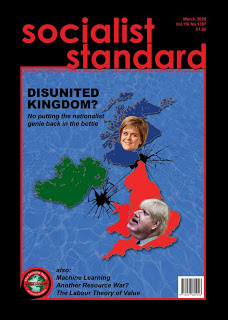 Alexandria Ocasio-Cortez Needs to Learn Economics (nationalinterest.org, 26 January). Indeed. But so does the author, Ben Shapiro. He objects to AOC’s claim ‘No one ever makes a billion dollars. You take a billion dollars.’ But that was one of the things she got right. ‘According to AOC, the very mechanisms of capitalism mandate such theft. In her view, successful businesspeople simply exploit their workers while maximizing their profits.’ By contrast, the Conservative Shapiro believes ‘consumers determine the value of products; producers do not. The diffuse informational system of the free market, which rewards the power of entrepreneurship, rather than punishing it…’. Socialists assert that profit can be traced to the additional value generated in the production process. Consider, a US factory worker’s output $73.45/hour vs. hourly pay of just $23.32 (huffpost.com, 6 December 2017) and ‘Almost 80% of US workers live from paycheck to paycheck’ (theguardian.com, 29 July 2018). This ‘surplus value’ is the difference between the labour time workers actually expend in the production process and the amount of labour time embodied in the commodities the workers themselves must consume to reproduce their capacity to labour, which Marx terms ‘labour power’. Even a ‘fair wage’, or co-operatives, which AOC supports, do not change the source of Shapiro’s ‘rewards’. He actually quotes approvingly from the Guardian with regard to the Spanish Mondragon Cooperative Corporation, whose worker-owners have ‘learned to think like the shareholders of any other global business.’ Exploitation of labour as the basis of profit accounts for the merciless drive of capitalists to extend the working day, so as to suck out every last drop of surplus value.

Capitalism is parasitic, seeking out profit wherever it can be made and leaving war and want in its wake. There is potential profit in the coronavirus. ‘The virus appears to have originated from a Wuhan seafood market where wild animals, including marmots, birds, rabbits, bats and snakes, are traded illegally’ (wired.co.uk, 30 January). Imagine the conditions for animals and workers involved with illegal farms and markets. The Indian government is doubling down on the damage done by promoting homeopathic treatment. ‘Far from being a “prophylactic medicine,” as the ministry suggests, this miracle concoction is, in reality, a super-diluted form of arsenic trioxide. Not only is the compound known to be fatal if improperly used, but there’s also no evidence to suggest it works on the coronavirus, or any other condition for that matter. If it weren’t for the Dalai Lama recently telling his followers to chant a mantra as protection, India’s purported tips to fend off the coronavirus might be the least effective advice offered yet. Now, the two will have to battle for that top spot, and India’s ministry of AYUSH (Ayurveda, Yoga & Naturopathy, Unani, Siddha, Sowa Rigpa and Homoeopathy) has even more nonsensical suggestions to offer in the fight… a drop of sesame oil in each nostril upon waking, and a “light and soft” diet…. Ayurveda and other traditional medicines, like Unani, are seen as a legitimate and burgeoning industry. The Prime Minister… wants to make them “a way of life”… and as holistic medicine becomes ever more profitable, the government has started promoting traditional remedies more and more’ (sciencealert.com, 30 January).


A world to win

We live in a sick society, yet a small minority continue to thrive. ‘The richest Americans are set to inherit a staggering $764 billion… The study noted the US has one of the lowest levels of upward mobility, which now “heavily depends” on the circumstances of birth’ (markets.business insider.com, 28 January). Who runs things from top to bottom? Who grows the food, who builds the houses, who mines the minerals, who transports them, who processes them, who fashions them into useful things, who does all the administrative work for this, orders the supplies, draws up the designs – who other than the working class`? The shareholding capitalist and the fat-cat company director are completely redundant as far as the actual work of wealth production is concerned – and new wealth can only be created by the application of human labour to materials that originally come from nature, not by speculating on the stock exchange or planning take-over bids. Their social role is purely parasitic – a mosquito that banks the blood it extracts, part of the wealth created by the rest of us. This is the system which AOC and Shapiro, with more or less governmental intervention, support, and which only a majority of us can end.