When will the people who support capitalism stop expecting it to do the impossible? When, having voted for a social system based on the minority ownership of the means of production, will they cease to be surprised when the system works in the interests of that minority? When will those who give sustenance to capitalism on the grounds that it is the most rational, progressive and efficient way of ordering human affairs accept that in reality it is an insane, reactionary and chaotic society?

It is pertinent to ask these questions at all times but they are given special point in the aftermath of the Ponting trial and the TV programme which exposed — as if it needed to — the fact that the Special Branch keep a close, intrusive eye on people who are in organisations which they consider likely to be a disturbing influence in this most rational, progressive and efficient society.

These events were followed by the customary bouts of outraged questioning about an apparent readiness by ministers to deceive parliament, and the people who vote them into their seats there, and about the secret operations which are carried out by part of the state machine.

The assumption behind all the questioning was that such things do not have to be. It is, the argument runs, unnecessary for ministers in charge of important departments like "Defence" to conceal the truth about their "work". It is, the argument further runs, an infringement of something called civil liberties for anyone to have the right to listen in to the telephone calls of others, to open their mail, to follow them about.

Life under capitalism would be a strange business indeed if the people who rule over the system's operations always told the truth. What would happen if, each time there is an economic crisis, the Chancellor got up and. instead of mouthing some weary assurances about bringing the problem under control, confessed to a complete absence of knowledge about how to do anything about it? What if a Minister of "Defence", when arguing for the money to keep the armed forces going, owned up to the fact that they are kept in existence to protect the interests of the capitalist minority?

This cannot be an open society. States must have their secrets, commercial as well as military. So there must be organisations which protect those secrets through being themselves clandestine; secrets, after all, cannot be safeguarded in the open. Of course, the thing can sometimes get out of hand, so that a pointless paranoia takes over and makes the whole operation look something of a joke.

But joke it emphatically is not. Capitalism cannot be a society which has any regard for human interests or values. People come a long way down the scale, when its priorities are operating. There has never been anything to gain from protesting about this, except if the protest is part of a conscious resolve to abolish the system altogether. 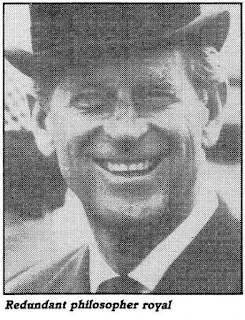 It will not do, to condemn too hastily the recent musings of the Duke of Edinburgh on the problem of unemployment. Rather, a measure of patience and understanding is called for. There have never been any reasons to place the Prince among the world's great thinkers so any efforts on his part to be original, or even reflective, should be seen as the best that can be expected from very poor material.

Speaking to a bunch of replete business people, the Prince urged us not to get so depressed about over three million people being out of work because there are a lot more than that still going through the daily routine of exploitation to keep parasites like him in their privileged position. One obvious drawback to this argument is that it has a much wider application.

Official figures tell us that there are about 15 million people in this country who are living at or below the government's poverty line. This represents a frightful burden of human misery; but of course there are about four times as many people in Britain, which means that the sufferers are in a minority. Then there are the figures for those who each winter die of hypothermia or of related diseases, which some authorities put at tens of thousands. What lies behind these statistics are incredible agonies and degrading deaths — all quite unnecessary. But of course even if the deaths do run into tens of thousands these, too. are also a minority so we don't have to worry.

Then what about the little matter of world starvation, in which the Duke is inclined to take a passing interest? He recently took his well-nurtured self to drought-ravaged Mali, where food aid is efficiently diverted to government officials, where people try to survive on the husks of grain and off eating leaves. "It is", he observed in yet another blinding misconception, "a great natural disaster, but one that has been aggravated by the population explosion . . ." He did not explain why he was anxious that the government deal with the problem; the tens of millions who endure famine each year are still only a relatively small part of the world's population so their suffering should be kept in that perspective.

In fact the Prince must know something about minorities since he belongs to one himself — the very small group of people who own the means of life and who live off the labours of the majority. There is another minority, of socialists, who are alive to this and although the Prince might not think us very noticeable at present he and his class will find the power of socialist ideas irresistible. By which time it will be too late for them to be able to do anything about it.

What now for the miners? Scargill's scalp now hangs, along with many others, on Thatcher's thickly festooned belt. Some observers fear that the unions have been castrated and talk of the Labour Party facing a generation out of power. Workers who fear redundancy have nothing to hope for in a Labour government who also slashed the coal and steel industries when they were in power.

It was, in fact, Neil Kinnock who defended the Callaghan government in this, at a by-election meeting in 1978, when he called for a "grown-up" acceptance of the need to close down large sections of industry — by which he meant an acceptance of the need to run capitalism in the interests of the capitalists, as the Labour government were trying to do.

During the strike the NUM warned that the government's long term plan was to trim the mines down to a few profitable pits and then sell these off to private owners. This prospect was raised as a kind of bogey but it was misconceived, for state ownership does nothing to change the class division of capitalism, nor does it eliminate the profit motive, nor has it exempted the miners from exploitation.

It was, after all, the NCB, and not private owners, the NUM were striking against and who starved the miners back to work. If the workers conclude from the strike that the Labour Party would run capitalism more acceptably, or that there is some gain for the workers in nationalisation, then the whole thing was indeed an exercise in delusion.

The defeat of the miners, as the established pace-makers in union militancy, may render them unable to take on the employers again for a very long time and may drastically affect the union movement as a whole. With capitalism in slump this is a buyers' market in labour power and no workers should forget it. The real lesson of the strike is about the natural, everyday laws of capitalism, of their inability to order an efficient, progressive, humane society and therefore of the urgency that workers think beyond the picket lines.
Posted by Imposs1904 at 4:40 AM