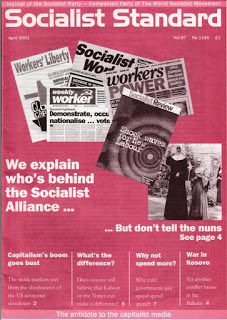 “The wealthy are doing well in America. Since 1976, the share of wealth owned by the wealthiest one per cent of Americans has doubled courtesy of the explosion of stock options, near halving of the top rate of income tax and the cuts in inheritance and capital gains tax. As a result the top one per cent of households own more than the bottom 95 percent of Americans combined” (Observer, 25 February).

“Deaths of construction workers are ‘spiralling out of control’ as building companies slash staffing numbers in a bid to meet tight margins. There have been 100 fatal accidents on British sites over the last year in an industry booming thanks to increased orders and consolidations. Unions blame this ‘construction site carnage’ on firms that force workers to go self-employed. George Brumwell, general secretary of the builders’ union UCATT, said: ‘The increase in the number of employees forced to go self-employed leads to corner-cutting, risk-taking, people doing jobs they are not trained to do, and cash-saving at all costs'” (Observer, 25 February).

Profit is the driving force of capitalism. The environment, the health and happiness of humanity is of no importance in relation to the profit motive. This has been again illustrated by the WHO report Water for Health; Taking Charge:

“More than a billion people lack access to clean water, despite 10 years of intense efforts by aid agencies to avert drought and pollution. An investigation by the World Health Organisation has revealed that tens of thousands of children are dying every day of thirst or from diseases triggered by infected or poisoned water. The WHO report, to be published next month says global warming will exacerbate the situation. ‘The greenhouse effect is already bringing more extreme weather and that means more droughts and more outbreaks of serious flooding,’ said Dr James Bartram (co-ordinator of the WHO’s water, sanitation and health programme). With flooding, drinking supplies get contaminated with sewage and people can no longer consume unpolluted water. Epidemics of disease, such as cholera then break out” (Observer, 25 February).

The Judeo-Christian God is a particularly blood-thirsty deity. According to his followers he is a dab hand at slaughter, famine and pestilence. Not to be outdone the Muslim deity (or is he the same one?) has been busy on the mayhem trail lately. The ways of God are indeed mysterious but those of his superstitious adherents are downright baffling.

“Thirty-five Muslims were crushed to death in a stampede near the holy city of Mecca in Saudi Arabia yesterday, as tragedy once again struck the annual hajj pilgrimage. The victims, 23 women and 12 men, mostly elderly and of various nationalities, were trampled and suffocated when a huge crowd in Mina valley rushed towards one of three giant pillars representing the Devil during a ritual known as ‘Stoning of Satan’. It was the first such tragedy at the hajj since 1998 when at least 118 pilgrims died, and more than 180 were injured in a stampede at the same spot in the third and last day of the stoning ritual. A year earlier, 343 pilgrims were killed and more than 1,500 injured when a fire destroyed 70,000 tents in Mina. The worst hajj disaster came in 1990 when 1,426 pilgrims were crushed to death in a stampede when a bottleneck developed at the entrance to a congested tunnel” (Times, 6 March).

The socialist view that capitalism distorts every human endeavour and makes it a mere commodity to be sold on the market place was recently illustrated by that arch-conservative the former Test Cricket umpire Harold Davis Bird (Dickie Bird):

“I think it is very, very sad that the old umpire has gone, but it all boils down to money. Winning means everything—don’t get me wrong—we all like to win but, once we lose the enjoyment of playing the sport you’re gone and it’s all down to money” (c.CrickInfo.Ltd, 6 March).

The futility of reform

“The Government’s measures to help the most excluded people in society have had no significant effect, researchers have concluded The study, Low-income Families in Britain: Work, Welfare and Social Security in 1999, found that more than 80 per cent of children in households where neither parent worked were forced to go without basic necessities.” (Times, 15 March)

Email ThisBlogThis!Share to TwitterShare to FacebookShare to Pinterest
Labels: April 2001, Building Industry, Class in the United States, Cricket, Free Lunch, Peter Rigg, Poverty in the UK, R2001, The Super-Rich, Voice From The Back, Water, WHO, Will Hutton, Workplace Deaths