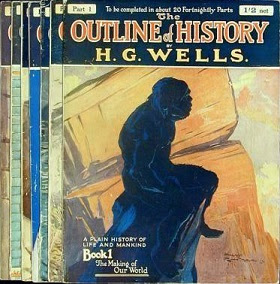 Book Review from the January 1921 issue of the Socialist Standard

Mr. Wells misses completely the transition of society in Greece and Rome from the tribal or kinship form to the political or territorial and class form of organisation. The striking social achievements associated with the names of Draco, Solon, and Cleisthenes are, for instance, passed over in silence. This is a serious omission and one that is difficult to explain. How Mr. Wells can sum up Athenian history without even mentioning the so-called "reforms of Solon" passes comprehension. The student who seeks information as to the social revolution from the tribal to the political phase as it occurred In the concrete both in Attica and in Rome cannot do better than consult Morgan's "Ancient Society" or the "Origin of the Family, Private Property, and the State" by Engels. These works may be supplemented by that instructive but less scientific account— "The City-State of the Greeks and Romans," by W. Warde Fowler.

Mr. Wells' history of Rome contains some of the finest work in the whole book, much of it showing real historical penetration. The following except from his account of the later years of the Roman Republic is typical of the best passages:

The rich grew richer and the poor poorer. It was impossible to stifle the consequences of that for ever by political trickery. The Italian people were still unenfranchised. Two extreme democratic leaders, Saturninus and Glaucia, were assassinated, but that familiar senatorial remedy failed to assuage the populace on this occasion. . . . In 91 B.C. Livius Drusus, a recently elected tribunal of the people, . . . was assassinated. He had proposed a general enfranchisement of the Italians, and he had foreshadowed not only another land law, but a general abolition of debts. Yet for all this vigour on the part of the senatorial usurers, landgrabbers and forestallers, the hungry and the anxious were still insurgent. The murder of Drusus was the last drop in the popular cup ; Italy blazed into a desperate insurrection.  (Chap. XXVIII. S. 3.)

In the next chapter the author treats of the Empire, of its miseries, corruptions, and debaucheries, and gives the real reason for the easy success of the "barbarian invaders" against the one-time "impregnable."

It is manifest that to the bulk of its inhabitants the Roman Empire did not seem a thing worth fighting for. To the slaves and common people the barbarian probably seemed to promise more freedom and less indignity than the pompous rule of the imperial official and grinding employment by the rich. The looting and burning of palaces and an occasional massacre did not shock the folk of the Roman underworld as it shocked the wealthy and cultured people to whom we owe such accounts as we have of the breaking down of the imperial system. Great numbers of slaves and of the common people probably joined the barbarians, who knew little of racial or patriotic prejudices and were open-handed to any promising recruit. No doubt in many cases the population found that the barbarian was a worse infliction even than the tax-gatherer and the slave-driver. But that discovery came too late for resistance or the restoration of the old order. Chap. XXIX., s. 2.)

Mr. Wells lays great stress, and rightly so, upon the fact that settled, cultured, and prosperous communities are apt to be overrun by warlike, nomadic peoples. The process and its effects are well described by Prof. Myres in his "Dawn of History." The conquerors first subdue and plunder the conquered but are eventually absorbed in or by them and their culture. This process, as Mr. Wells puts it, "in a thousand variations has been one of the main stories in history for the last seventy centuries or more." But the recognition of this fact leads the author to amazing conclusions. In his chapter on the "Renascence of Western Civilization" he introduces to our notice his third type of community, which turns out to be a compound of or hybrid between his first two.

Essentially this modern state, as we see it growing under our eyes to-day, is a tentative combination of two apparently contradictory ideas, the idea of a community of faith and obedience, such as the earliest civilizations undoubtedly were, and the idea of a community of will, such as were the primitive political groupings of the Nordic and Hunnish peoples. For thousands of years the settled civilized peoples, . . . seem to have developed their ideas and habits along the line of worship and personal subjection, and the nomadic peoples theirs along the line of personal self-reliance and self assertion. . . . It was only after thousands of years of cyclic changes between refreshment by nomadic conquest, civilization, decadence, and fresh conquest that the present process of a mutual blending of 'civilized' and 'free' tendencies into a new type of community, that now demands our attention and which is the substance of contemporary history, began. (Chap. XXXV s. 1)

Now for the result of this "blending."

. . . constantly recurring nomadic injections have steadily altered the primordial civilization both in blood and spirit; . . . the world religion of today, and what we now call democracy, the boldness of modern scientific enquiry, and a universal restlessness are due to this ''nomadization" of civilization. The old civilization created tradition, and lived by tradition. To-day the power of tradition is destroyed. The body of our state is civilization still, but its spirit is the spirit of the nomadic world. It is the spirit of the great plains and the high seas." (Chap. XLI. s. 4.)

Surely no more fantastic theory as an explanation of modern society and its mental reflex was ever conceived. To show all its absurd implications would take more space than we can spare on such ridiculous nonsense. The confusion of Mr. Wells is shown by the way he brackets as effects of a common cause the "world religions," all of which are over a thousand years old, with modern scientific "enquiry" and "democracy," the achievements so to speak of the day before yesterday. The old civilization did not create tradition. Tradition as a social force existed ten thousand years before any civilisation was dreamt of. It is in fact more potent by far among barbaric peoples than in any form of civilization. The old civilization used tradition and modified it for class purposes. It is so used to day, and is far from being "destroyed."

If Mr. Wells can find no adequate explanation other than the above of the modern developments he mentions we can provide him with one. The economic conditions of the primitive civilizations preserved in a modified form, and in fact were built upon, the old-established institutions of the patriarchal stage—the village community and the guilds—the very embodiments of tradition. Such indeed is the condition to-day in China and India, and such was largely the case in the manorial system of mediaeval Europe.

But economic developments undermined the manorial system. Commerce and money payment freed the serf, destroyed the "village" and put in its place the free peasant and the capitalist farmer, produced eventually the propertyless wage working class on the one hand and the capitalist "manufacturer" on the other. Then the machine revolution in industry and transport brought us to the fully fledged capitalist system of to-day. These broadly were the factors, real concrete factors, not the Wellsian myth of "Nomadization," which smashed the fetters of feudal tradition and created modern science and "democracy." As a matter of fact in other parts of his book Mr. Wells to a certain extent actually shows the part which these economic developments played in bringing about the above ideological effects. Throughout the book the narrative of history is very much superior to the author's generalizations about it.

There have been no incursions of nomadic invaders into Western Europe for well over a thousand years. Would Mr. Wells then have us believe that this "spirit of Nomadism" has persisted through hereditary transmission and in an adverse environment during all these centuries and has actually increased beyond measure in the past hundred years !

Mr. Wells's account of the French Revolution makes good dramatic reading, here and there getting down to realities, but for the most part it is superficial. He gives a sympathetic account of the Jacobins and a fairly rational account of the "Terror." He is particularly to be commended upon his repudiation of the malicious lies with which most "historians" have slandered the fine personality of Marat. But nowhere does he tell us that the paramount factor which determined the nature, course and outcome of the revolution was the class interests of the bourgeoisie. The present writer strongly recommends to the student what is easily the best recent and popular contribution to this subject — "The French Revolution," by H. Packwood Adams, a book with a viewpoint almost Marxist. In it we read—

the only clear and ruthless purpose existed in the brains of the middle class. . . . The removal of seigneurial oppressions and of administrative chaos were a necessary part of the economic plans of the men of commerce ; . . . the main advantage of the Revolution went to those long-headed capitalists whose destiny it has since been to make the nineteenth-century Europe the factory of the world, and indirectly and unwillingly forge what may well become the iron cradle of a more gigantic democracy than the world has known. These people knew what they wanted and got what they wanted, but the getting was harder than they knew. (P. 27-27.)

Those who have read that remarkable little book "The Eighteenth Brumaire of Louis Bonaparte," will remember how Marx states in his opening paragraphs that all great historic personages occur twice—once as tragedy and once as farce—and that when men are engaged in revolutionising things and themselves they conjure up the spirits of the past, assume their names and costumes to enact a new historic scene in a time-honoured disguise and with borrowed language.

No better illustration of Marx's generalisation could be forthcoming than that Mr. Wells gives when dealing with Napoleon Bonaparte.

His coronation was the most extraordinary revival of stale history it |is possible to imagine; Caesar was no longer the model; Napoleon was playing now at being Charlemagne. . . . the Pope had been brought from Rome to perform the ceremony ; and at the climax Napoleon I. seized the crown, waved the Pope aside, and crowned himself. The attentive reader of this Outline will know that a thousand years before this would have had considerable significance ; in 1804 it was just a ridiculous scene. In 1806 Napoleon revived another venerable antiquity, and, following still the footsteps of Charlemagne, crowned himself with the iron crown of Lombardy. (Chap. XXXX1II. s. 4.)

Mr. Wells gives two useful quotations from Napoleon's writings on the political use of religion :

"How can you have order in a State without religion ? Society cannot exist without inequality o£ fortunes, which cannot endure apart from religion. When one man is dying of hunger near another who is ill of surfeit, he cannot resign himself to this difference, unless there is an authority which declares—'God wills it thus : there must be rich and poor in the world ; but hereafter and during all eternity the division of things will take place differently.’"
"It is my wish to re establish the institution for foreign missions ; for the religious missionaries may be very useful to me in Asia, Africa, and America, as I shall make them reconnoitre all the lands they visit. The sanctity of their dress will not only protect them, but serve to conceal their political and commercial investigations." (Ibid, s. 3.)

Napoleon, like all intelligent rulers and politicians, knew the value of superstition as an instrument of class subjection, but few of his kind have stated it so clearly. For this very reason, as Mr. Wells points out, he had opposed religion as a freethinker when he was a youthful revolutionary Jacobin.
R. W. Housley.