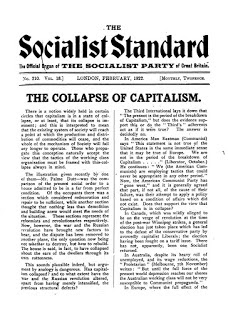 Sirs,—In the S.S. for December, 1921, at the foot of page 51, Mr. Tom Sala quotes—apparently with disapproval—the statement—

I have never been able to understand why readers of the S.S. have uninformed stuff of this sort occasionally flung at their heads, seeing that the proletariat is wholly indifferent to philosophy, advanced physics or psychic science.

However, as space is allotted in your journal to these topics, may I ask Mr. Sala one or two questions?

Reply.
Comrades,—Mr. Foster appears to have missed the point of my comment. My reason for quoting and commenting on the observation was to show that in the field of science, as anywhere else, the workers were being bluffed. Hence, as a Socialist, my disapproval.

The term "materialistic" in the quotation given was used by its author deprecatingly, suggesting that materialism in the "old sense" (meaning that of Spencer, Haeckel, Buchner, etc.) had had its day and that the metaphysicians had now something to say. Taken with its context, where it went on to say that "true science did not seek to deprive man of his soul, or to drive the Creator from His Universe," its meaning should have been obvious.

Conceptions of matter may have changed, but no scientist, with any regard for the facts, can say that matter is any less materialistic than it ever was. Admitting that the old views of matter required modification, to say that matter as now viewed by science is less materialistic, and that it can find a place for God and the soul, is both unscientific and misleading.

If I understand Mr. Foster to mean that these things are of no importance to the cause of the workers, then I venture to disagree with him. If, also, he means that there are subjects which are outside the interests of the proletariat, and to which it would be futile to give them access, again I disagree. It may be true that they are indifferent to scientific subjects; but don't we find, as teachers of Socialism, that they are not only indifferent to our teaching, but are indifferent to their own poverty ! But that does not mean we should abandon the task, surely ! Mr. Foster's gibe suggests that I did wrong in selecting the statement quoted for comment. Assuming I am "uninformed," he thereupon proceeds to test my knowledge by submitting the following questions :—

Ans. : I don't know. If by "force" is meant energy (since "force" has no physical existence), then matter as distinct from energy (or "force") is an unthinkable proposition. I am aware that these are spoken of as "entities," yet we are told that each is known only in its relation to the other. We may know some thing of the constituents or properties of matter, but as to what matter itself is—does anyone know ?

(2) How can "matter" (as distinct from force) effect sensation in us, and so apprise us of its existence?

Ans. : This starts with the same proposition as No. 1. It is, therefore, covered by the answer to No. 1. Perhaps some person less "uninformed" than myself would like to get busy on this.

After all, the Editor's space is limited, if the Universe isn't.