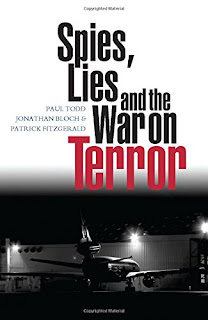 The ‘Cold War’ has been replaced by the ‘War on Terror’ as a means of defending the interests of Western capitalism. The identification of a new enemy has paralleled an enormous increase in the amount of snooping that goes on, with governments spying ever more closely on their own citizens. These are the kinds of developments chronicled in this volume.

For the United States in particular, the gathering of intelligence has come to serve the purpose of pre-emptive war, aimed at stopping any perceived threat to the power of the capitalist class before it can be put into action. This may involve ‘creative destruction’ in the Middle East (a term coined by an American neo-con, not by the authors). The idea of a US military presence in the Middle East became a long-term goal, eventually realised in Iraq. In fact, intelligence is sometimes massaged (as with Saddam Hussein’s alleged weapons of mass destruction) or deliberately ignored. Consequently much US policy backfires, as when Iran has benefited from the elimination of regional rivals (the Taliban in Afghanistan, and Saddam).

At the same time, and as state and corporate intelligence functions increasingly merge, domestic spying is becoming more and more pervasive. The National Security Agency in the US, for instance, has been monitoring all phone calls made to overseas, and the president has powers to authorise surveillance without a warrant. Sometimes the information recorded is laughable, with Quaker meetings logged as ‘suspicious incidents’, but the spread of government intrusion into people’s lives is no laughing matter.

Similar developments have been taking place in the UK, with increased powers for the police and much so-called anti-terrorist legislation. There have been arrests of people (as in a supposed bomb plot in Manchester in 2004 and one in East London in 2006), accompanied by lurid press speculation and much disinformation from police sources; in neither case was any evidence found, and the arrested were released without charge. Lengthy detention was introduced for those who had not done anything, just supposedly threatened to undertake some action designed to advance a political cause.

The War on Terror, then, not only results in killings on a massive scale in Iraq, Afghanistan and so on, in the interests of Western, specifically American, power. It also leads to the creation and expansion of databases containing enormous amounts of information on people, information that we cannot access, let alone challenge, even if we know it’s there. This book gives a detailed and frightening account of how and why this is happening.