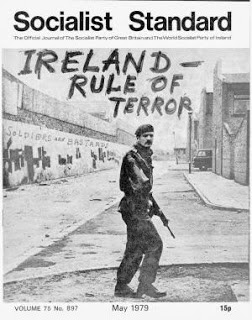 What They Offer
For the past year a General Election has been expected and you, the voters, have been blasted from every direction by the crude sales tactics of the power-hungry political leaders. The Tories have directly conducted an estimated £l-£l¼ million campaign to sell their second-hand policies, while the Labour party have enlisted trade union leaders and union funds to convince you, the voters, to accept policies that would be intolerable coming from the Tories. Now that the election is here the political leaders grovel for your vote. THE SOCIALIST PARTY OF GREAT BRITAIN’S election address is different for three reasons.

1. The Socialist Party does not ask you to vote for a would-be leader but to consider the merits of a serious idea. While the other parties consider the voters too stupid to do their own thinking, we recognise and depend upon, your ability to understand our case. In fact, the Socialist Party of Great Britain asks you not to vote for us unless you are convinced by what we say.

2. The Socialist Party does not speak the same language as our political opponents. They talk about “the balance of payments problem”, “the nation”, ‘‘the good of the economy”, “law and order”. Theirs is a system in which able workers are thrown on to the scrap-heap when it periodically becomes unprofitable to employ them; in which houses stand empty while homeless families live in misery because they can't afford to pay for a home; in which food is destroyed while millions starve; in which Christian morality is preached while governments store up piles of arms to destroy the world in the quest for markets.

Socialists speak the language of class struggle; that there is a working class who produce the wealth of society in return for wages or salaries, and a capitalist class who reap the profits simply because they own and control the means of producing and distributing wealth. For Socialists the important issue in this election is—Who is to own the means of life; the wealth producers or a minority of rich parasites?

3. The Socialist Party does not offer you promises of “higher wages” or “ more welfare facilities” or “greater security”. The sad but indisputable fact is that as long as you go on supporting capitalism, its problems will be with you. A system which produces even the necessities of life for sale on the market at a profit causes poverty and insecurity for the majority alongside luxury and power for the few.

Many workers will agree that everything we’ve said so far is only too true. Yes, the other political parties ARE opportunists; yes, there IS class inequality; yes, the real problem IS capitalism. But what's the alternative?

What Socialism Is
The only alternative is Socialism. A society in which the whole community will own the means of production mid distribution of wealth. Class divisions will cease to exist, because instead of the separation between owners and producers of wealth, everyone will own and produce in common. Authoritarian leadership will give way to genuine democracy in which people will really have a say, because no longer will a minority possess power and privilege. Production for profit will be replaced by production for human needs, whereby goods will be freely available for people to take according to their needs. Work will be carried out on the basis of free co-operation instead of the coercion of the wages system. The division of nations will give way to the unity of one world. Inequality based upon possessions, status, race or sex will vanish as human beings create, for the first time ever, a sane society geared to the fulfilment of human needs. Critics of Socialism claim that given free access, people will act irresponsibly. This we dispute. It is perfectly possible for people to act sociably when a Socialist majority puts an end to the rat-race.

THE SOCIALIST PARTY OF GREAT BRITAIN is the only party in this election to stand unequivocally for Socialism—although there are others who pay lip service to the idea. Labour says that Nationalisation is Socialism, but state intervention is just another way of managing capitalism. The Communist Party says that Russia is Socialist, when it’s simply a state-capitalist dictatorship of one party. There arc even some trade union leaders who say that Socialism means “responsible wage restraint” when in fact it means the abolition of the wages system.

For the working class, the vast majority of the population, Socialism is the only alternative to the chaos of the profit system.

YOUR VOTE MEANS POWER . . . ARE YOU PREPARED TO GIVE IT ONCE AGAIN TO ONE OF THE PARTIES OF CAPITALISM . . . OR WILL YOU JOIN US IN TRANSFORMING THE SOCIALIST IDEA INTO REALITY?
Posted by Imposs1904 at 12:21 AM

That's the May 1979 Socialist Standard kicked into touch.