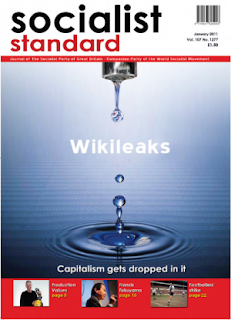 The Voice From The Back Column from the January 2011 issue of the Socialist Standard
A Happy New Year
We all love that time just before midnight when we cuddle our sweethearts and friends and wish each other a happy new year. We ignore reality. For one time in our life inside capitalism we celebrate just being alive. One of the reasons that we cannot be too joyful is that we remember what a shitty society we all live in. “Millions of families are struggling to pay their bills – and the number is likely to increase in the new year, according to a new analysis from the Bank of England. The report published today shows that two fifths of households have difficulty from time to time or constantly in meeting their monthly bills, compared with a third last year, and more than a half regard their overdrafts or credit cards as a burden” (Times, 13 December). Behind the dry statistics what we are talking about is human misery and anxiety. Fellow workers, let’s face it capitalism sucks.
The American Dream
One of the illusions beloved of supporter of capitalism is that while the progress of equality may be painfully slow in Africa or Asia, in the USA you can see an example of developed capitalism and its many benefits. The reality is much different. “Almost 15% of US households experienced a food shortage at some point in 2009, a government report has found. US authorities say that figure is the highest they have seen since they began collecting data in the 1990s, and a slight increase over 2008 levels. Single mothers are among the hardest hit: About 3.5 million said they were at times unable to put sufficient food on the table. Hispanics and African Americans also suffer disproportionately. The food security report is the result of an annual survey conducted by the US Department of Agriculture (USDA)” (BBC News, 15 November). It would seem that for many people in the USA The American Dream has turned out to be The American Nightmare.
A Merry Christmas?
Hundreds of thousands of leaflets produced by Crisis UK were pushed through letterboxes last December appealing for donations. They painted a horrible picture of what Christmas meant for the homeless. “Hidden homeless people live in hostels, squats, bed and breakfasts or sleep on friends’ floors. They often lead miserable, isolated lives and suffer from debilitating mental and physical health problems. Crisis wants to open nine centres between 23 and 30 December offering homeless people companionship, care, hot food and warm clothing at a time of year which can be particularly lonely for those without a home or a family.” These well-meaning people are obviously sincere in their attempts to alleviate the plight of the homeless, but what happens after the 30 December? Charity cannot solve the problems of poverty, homelessness or alienation. Only a complete transformation of society from the profit motive to world socialism can accomplish that. Wake up fellow workers charity doesn’t work. It never has.
The Profit Motive and Cancer
The notion that the medical world is devoted to the prevention of killer diseases is a widespread one, but often research is devoted more to treatments rather than cures, as can be seen from the following news item. “The pharmaceutical industry will always fund projects when it is in its best interests to do so. Cancer prevention is not currently one of these, and so Cancer Research UK, the Medical Research Council and the Department of Health have to fund early detection, screening and prevention studies. It is amazing that less than 2 per cent of the total cancer research budget is spent on prevention. We live in a commercial world where nobody is willing to pay very much for vague prevention information – it has to be made more precise and more individual. People value treatment more than prevention, so that’s where the profit now lies” (Daily Telegraph, 8 December). Less than 2 percent of research spent on prevention because treatment is more profitable – truly capitalism is a cancerous society.