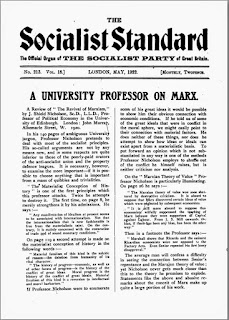 From the May 1922 issue of the Socialist Standard

To the organised workers of the world remains the ultimate task of establishing; the greatest of all systems of society. It is the supreme purpose, and can be stated thus : taking the two essential factors—the world and its inhabitants—to realise to the fullest the means of the well-being and happiness of the whole of humanity.

The history of the ages can be depicted as a series of connected social systems evolving one from another, in each of which the mode of wealth-production is the chief consideration determining the character and structure of that system.

Man needs food, clothing, and shelter. All are derived from the planet on which he lives by the application of labour-power usefully exercised. Without these things he perishes; if insufficiently obtained, he suffers. Without labour they are unobtainable. They minister to his physical and mental needs. Man has a many-sided, complex nature. The more highly developed society becomes, the greater the need for the co-operative efforts of the units composing it.

Man can only develop his finest social instincts, his best physical and mental qualities, in a society whose members are free. Otherwise those potentialities, both in society and its units, are thwarted or stunted. Man’s chief usefulness is in contributing to the social wealth.

In the broadest sense, all that ministers to humanity’s physical and mental needs, advantages, and enjoyments, can be considered as social wealth.

But to-day we find that society is, roughly, divided into two classes with conflicting interests. This has been brought about through the historic development since primitive times. It arises from the fact that the ownership and control of the means of living are in the hands of one class. Wealth is socially produced, but the wealth itself is privately owned and controlled by the capitalist class.

The much larger class in society—the working class—does not own nor control the means of living. The function it fulfils is to act as wealth-producer for the class that owns. The workers own nothing but their potential energy of brain and hand : and through their efforts, alone, all wealth is produced.

The master class do nothing useful whatsoever in the process of wealth production.
The working class thus exist under the present system in a state of slavery. Theirs to produce commodities for sale in the market. They are “wage-slaves,” who receive in “wages” but a small portion of the values they produce—on the average but a bare subsistence wage. The surplus-value they produce in factory or workshop is only realised for the capitalist by sale in the market. It is represented by Rent, Interest, and Profit.

Being used to produce surplus-value, the working class are thus exploited and robbed of the product of their toil. The result to the workers is seen in their chronic poverty and misery, unemployment, disease, overwork, and a host of evils inevitably springing from the system itself—the result of production for “profit” for the benefit of a class. But to that class who exploit them it means an ever-increasing affluence, luxury, and idleness.

Now the main reason why the capitalist class are thus able to own and control the very lives of the workers is because they are in possession of political power, and use it for their class-interests alone.

The solution, then, is obvious ! When once the workers of the world become conscious of their slavery, they will organise as a class to capture the powers of Government in order to emancipate themselves. Once in possession of that, and its adjuncts —the armed forces—they will use it as a means of establishing an entirely new system of society—Socialism. Under their administration all the means of wealth production and distribution will be owned and controlled by the whole community—wealth being produced then for the use and enjoyment of all!

The class-division will thus be automatically abolished, as the essential interests of all its members are one and the same. Thus, and thus only, will be assured the means for the well-being and happiness of the members of society as a whole; and the evils of wage-slavery will be ended with their root cause—Capitalism. So we see that the realisation of the greatest social system depends on the organised efforts of a class-conscious, determined working class. Theirs to free themselves and secure the means of comfort, equality, and freedom for all.

Hence the clarion call of Karl Marx: “Wage-workers of all countries, unite ! You have nought to lose but your chains ; you have a world to win !“
J.G.M.
Posted by Imposs1904 at 10:51 AM