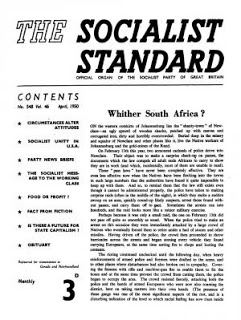 From the April 1950 issue of the Socialist Standard
There are many objectionable things during a war; property and homes are destroyed and lives are tortured and twisted in more ways than one. When peace is declared much remains for which the war must take and get the blame.
The late Robert Lynd had Saturday articles in the News-Chronicle showing the good side to many subjects which were generally accepted as unpleasant, but I never remember his praise of war.
The redeeming feature of modern war is that in so-called civilised countries the great mass of the workers are able to “get by.” This solves their greatest problem. I well remember working as a collector in the 1930’s and being brought close to the problems of my clients, who could not find a few pence each week for me to record on their premium books.
Then came 1940 and the A.R.P., when people previously unemployable were in receipt of the princely sum of £3 5s. every week, without such things as short time or lost time.
What a blessing for “tally men” like us; we found life much easier. Thousands of people in war work who would have ended their days in penury if our generation had been blessed with peace.
Owing to the terrible devastation during the war we find that five years since it ended we are still blessed with full employment and the Labour Party using it as a main plank in their election programme.
Commercial cables received in this country are delivered by special messenger. Before the war this was done by young boys of 15 to 18 years of age, at a wage of about 20s.
Owing to the Greater Production drive and National Service at 18, this labour is now scarce and almost unobtainable at anything approaching an economic rate, and the cable company have been compelled to look to fresh fields. The only available labour is that of the type that in peace time would be on the scrap heap, men of 65/70, incapable of ordinary work but still able to hobble off and on buses. If you live in London and happen to be in the City, glance into Creechurch Lane, E.C. (Leadenhall Street), and you will see the grandfathers sitting in the waiting room of the Commercial Cable Company, and you will realise “It’s an ill wind that blows nobody good.”
Many casualties of the 1931 economic blizzard may still lose sleep at night, worrying about the future, but with the help of God, a bit of luck at the “pools” and two more major wars, he may finish up his days in a job. That is all that matters (perhaps), unless you can think of an alternative.
David Boyd
Posted by Imposs1904 at 8:59 AM

When I started scanning in this article, I really wasn't sure what to expect but it really is a wee gem of a piece. Political bite and political sarcasm in equal measure. Sounds daft but it reminds me of that Elvis Costello lyrics from 'Shipbuilding'. (Maybe I need some caffeine.)

David Boyd's obituary from May 1979 issue of the Socialist Standard:

The death occurred in February of Comrade David Boyd, just three weeks short of his celebrating forty years as a party member. His son has provided the following obituary:

David Boyd was born in 1903 in Larne, Northern Ireland. Grandfather was a foreman at the local aluminium works and although a devout Presbyterian he supported Irish Home Rule—an unfashionable if not dangerous viewpoint. His was apparently the only copy of the Daily News to arrive each day on the ferry boat from Stranraer (the republican minority presumably taking more subversive journals). Dad remembered when the windows were tarred over and only my grandfather’s senior position in the local Masonic Lodge preventing real violence and loss of job. Amid the conflict and stupidity of the 1912 Loyalist gun-running, the War and the ‘Troubles’, Dad learned about socialism from a Scottish lodger at their home and from The Ragged Trousered Philanthropists. The Depression came early to Northern Ireland and Dad came to London. He took a variety of jobs and was sacked in about 1930 by the Co-operative Insurance Society for helping to organise a strike of fellow agents. A flirtation with the CP was followed by Orwellian disillusion and a home in the SPGB which he never left. “I thought about things’’, he told us “that’s why I am a socialist". Dad's ashes will rest in the local cemetery looking towards Mugsborough.

A fine piece and an excellent comment from yourself.