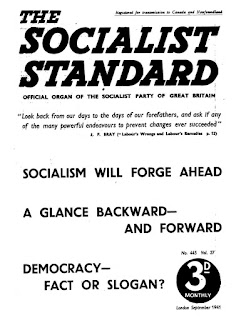 From the September 1941 issue of the Socialist Standard
Society’s emancipation from the chaos of war, want-amid-waste and mental stagnation, must await the Socialist education of the working class, for which purpose the Socialist Party of Great Britain exists. Logically expected is the colossal opposition of avowed capitalist propoganda; but what irony, what tragedy, that working-class organisations should set up a further barrier.
Such bodies not only put forward the demonstrably false idea that a revised capitalism could operate in the interests of the workers, but also perpetrate the additional and even greater crime of tagging “Socialism” to such proposals. More : despite the S.P.G.B. example of nearly thirty-eight years of political integrity, these parties manifest such inconsistencies that the worker, confused and disillusioned, loses his progressive urge, and either returns to political apathy or else goes as far as active antagonism to any movement styling itself working-class.
An outstanding instance is that of the Labour Party—non-Socialist, according to the scientific exposition of the S.P.G.B. Further misconceptions, unfortunately common, are that “Socialist” can be applicable to schemes for “public ownership” and to the regime in Soviet Russia. Particularly significant are, such statements as : —

“Emergency powers to be used to take over the banks, land, transport, armaments, and other large industries in order to organise our economic life in the interests of the people.”—(People’s Convention Program, point 4.)

“The one essential thing is that all the various forms of socialist organisation should involve the public ownership of the means of production.”—(Mr. John Strachey, “Why You Should be a Socialist,” p. 65.)

To the S.P.G.B. alone can the worker turn for unwavering and scientific political enlightenment. In 1917 we stated that the Russian revolution could not achieve Socialism, and thereafter have consistently indicated and explained the rise in that land of a form of State capitalism, evolutionarily consequent upon feudal backwardness. It should here be noted that rapidly increasing production, industrialisation, widely extended education, improved health services and other public welfares—claimed by pro-Soviet propagandists as evidence of Socialism—are in fact normal features of capitalist growth in many countries.
Regarding nationalisation, or public ownership, its quality is State capitalist, not Socialist; so, axiomatically, its function is not in the interests of the workers. What fundamental working-class problems were solved by, say, the German State institutions from Bismarck to the Nazis ? Turning to Great Britain, is that not equally true of such bodies as the London Passenger Transport Board ? Then, too, the conditions of Government and Municipal employees are basically typical of capitalism.
It is essential to understand that the State, often presented as being identical with society, is, on the contrary, a superstructure thrown up by society and seized upon for the purpose of rulership and exploitation.
With the advent of Socialism it will go the same way as the bow and arrow, the tinderbox, the penny-farthing, the yoyo and other things society decides it has no use for.
“Russia is Socialist!” “Public ownership is Socialist!” Oh, for William Shakespeare to pronounce: “Call any other flower a rose, and it will not smell as sweet.” Or for Donald Duck to squawk “Phooie!”
Richard Tatham
Posted by Imposs1904 at 1:53 AM

Christ, the style of prose in that article was - pardon my French - clunky as fuck. It almost read like a caricature of an SPGB article, which is interesting because Tatham was a supporter of Harold Walsby, and was actually expelled from the SPGB in 1942 because of his association with a Walsby group called The Absolutist Group. Including Tatham, three SPGBers were expelled because of said association with this group:

Tatham had only joined the SPGB in February 1941, via contact with a F. Johnson and a E. Burden. I wonder if that article was a deliberate piss-take, or if he genuinely wrote in that robotic and off-putting style?