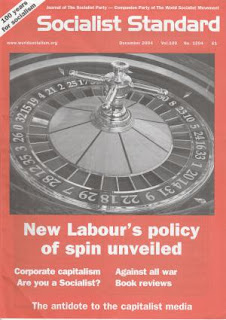 From the December 2004 issue of the Socialist Standard

Do you ever get the feeling that something isn't right with the world? Although you can't quite put your finger on it, you instinctively know that life shouldn't be the unending uphill struggle to make ends meet while coping with stress and a job that provides little interest or stimulation? The very fact that you're reading the Socialist Standard suggests that you're looking for answers to questions about the way we live and that you already have serious doubts about the things the media and politicians tell us. So what does being a socialist mean?

Adopting a socialist view means looking at the world from a class perspective instead of a national one. It is understanding how and in whose interest today's world is organised, envisaging how a socialist society can be established, and appreciating how socialism will improve people's lives. Socialism has nothing to do with organising capitalism as many, including the Labour Party, have erroneously asserted and nor is it a description of the regimes in the former Soviet Union, China or various other countries that have adulterated the word to describe state capitalism. Fundamentally, being a socialist means realising that no amount of government reform or attempt at improvement can resolve our problems because their root cause lies in society's economic base, and that working people must themselves, without leaders, organise to end capitalism and replace it with a new and different society based on the common ownership and democratic control of productive resources, with production solely for use not profit.

Class society
The source of the problems working people face today is the minority, or class, ownership of the means of life. The small minority who own the companies and corporations that control the factories, mines and raw materials live by harvesting the profit from wage or salary earners employed to produce goods and services for sale on the market. The market dictates 'what' and 'how much' is produced because the things we need to live are produced to meet what is called 'effective demand', meaning not actual demand but only 'demand' backed by the money needed to purchase. So unless we have money to buy goods we cannot have them. Productive activity is not organised to satisfy people's actual needs or wants but to generate profit for the owning class.

So life today means we have to cope with all kinds of deprivation and pressures resulting from an artificial scarcity resulting from the pursuit of profit. It means finding money to pay the rent or the mortgage or to buy food. It means anxiety over mounting debt and fear of losing our job in the next reorganisation. It means an unreliable health service, a stressful transport system, and relentless pressure from every direction to buy and consume more. Life is a treadmill, where worry and stress are an everyday part of existence, symptomatic of a world where we have no control and in which we feel isolated and estranged from a society that functions to make profit.

From a global perspective, production for profit has an even greater consequence. It means a world where people starve yet plenty can be produced to feed all, where millions seek work while factories lie idle, where poverty and deprivation exist alongside technologies that could produce an abundance of life's necessities, where people suffer or die while medicines are stockpiled. The list of contradictions is endless, but however barbaric this seems it all makes perfect sense when we grasp the truth that profit is more important than human welfare. People suffer because there is not enough profit in ending their suffering. Investment is made only where sufficient profit is assured, regardless of the human needs that go unmet.

Most of us have been seduced by a false notion that minority ownership of the means of production and distribution is 'natural', and have not yet grasped the fact that while the owning class needs working people we don't need the owners. Capitalism is organised from top to bottom by ordinary wage and salary earners, who make all the goods we need to live and operate all the services we depend on. And yet it is the non-productive parasitic owning class who grow wealthy on our labour and live lives freed from material worries. For them luxuries and infinite choice, for us cut-price bargains, poor quality, stress and worry. We spend a lifetime struggling to overcome hardships but unselfishly reward the owners with a life of opulence and plenty.

The owning class are aided and abetted in their task by governments that consciously work against our interest. Government and the state exist to perpetuate class dominance, and to create a continuous flow of healthy, educated, trained and obedient workers and to provide an infrastructure that caters for profit making. They deceitfully tell us that wars must be fought to defend 'democracy' or end 'injustice' or for some other high-sounding ideal, ignoring the fact that in reality wars are caused by the owning class attempting to protect or expand their markets, spheres of influence or simply to plunder raw materials. Politics and government is the art of giving the appearance of enacting policy that will benefit working people while actually pursuing interests that benefit the owning class. Sometimes, of course, certain policies do incidentally benefit working people. But their prime motivation is never a desire to make life better and if such policies are examined closely, it soon becomes apparent whose interests are really being served.

But just being critical of capitalism is not enough. The problems it causes will not cure themselves. Socialists know that capitalism cannot be reformed to serve human needs and are therefore hostile to all political parties that falsely claim to be able to do this. The source of our deprivation and anxiety lies in man-made structures and can be eliminated only by men and women understanding their condition and combining together to replace capitalism with socialism. A global society – one so inhuman as to place people's welfare at the bottom of its priorities – can only be globally replaced. Socialism is the root and branch replacement of capitalism throughout the world where national boundaries and the concept of nations will disappear.

Socialism
Socialism is an immediately realisable society which will replace minority ownership with the common ownership of the means of producing and distributing wealth, which will be democratically organised by the whole human community. Production will be for use and not for sale on the market to make profit. Productive capacity, freed from the constraint of profit, will be utilised to produce an abundance of life's necessities for no better reason than to satisfy people's needs and wants. Markets, exchange and money will all be abolished. Instead all will have free access to the things that have been collectively produced by human society. The free access to life's necessities will be irrespective of whether people have actually participated in the productive process or not, since work will be voluntary and without compulsion. In capitalist society work is seen as synonymous with employment, but once this link has been severed and wage slavery abolished there is no reason to assume that work will be not only a biological necessity but also an enjoyable and creative experience.

Socialists understand that, to abolish capitalism, working people, without leaders, must win control of political power. But capturing political power requires political organisation and a political party to serve as a vehicle to express a socialist majority. The Socialist Party in Britain (together with its companion parties in other countries) has as its objective the establishing of socialism. It offers itself to serve as a instrument which working people can utilise within the electoral system to vote a socialist majority into local government and parliament. Having democratically won control of political power and neutralised the power of the state, working people need to take but a single action: the abolition of class society and its replacement with the common ownership of the means of production and distribution. The abolition of capitalism and the end of the class struggle will also signal the demise of the Socialist Party itself, for, having served its purpose, its continued existence will be meaningless.

Socialism can only come about when a majority of working people want it. This necessarily involves breaking with the mindset induced by society's class structure, a difficult but not impossible task. The owning class has created social institutions that express class dominance and society has become infused with habits and customs that reflect the values of the owning class. Without our knowing, our beliefs have been artificially constructed by capitalist society, and our social consciousness, our assumptions and ideas have all been subtly moulded to reflect that society's economic base. We have been instilled with slanted values, conventions and concepts continuously reinforced by education, religion, entertainment, advertising and the media that all prepare us for a life of class, profit and wage slavery. We accept authority without question and have assimilated a view that society is 'good' and 'fixed', a frame of mind that makes it very difficult to envisage change and an alternative society.
As a result, many dismiss socialism as a 'good idea' but claim it will never happen. But why should this be so? Nothing is forever 'fixed.' Class society and government rest almost solely on opinion and when a majority of working people armed with socialist understanding demand change we will be unstoppable. Likewise, many claim no interest in politics, but to genuinely feel this is to abandon any concern in one's own welfare, a notion that serves our masters well by keeping working people obedient and placid.

So isn't it time to break free of the deceptions, to acknowledge the reality and to join the struggle for socialism? The choice is simple. You can either watch helplessly as the world's problems intensify and threaten the very existence of humanity or join the movement to end capitalism and build socialism. If you're a socialist your place is in the Socialist Party. There is no middle course.
Steve Trott
Posted by Imposs1904 at 12:26 PM