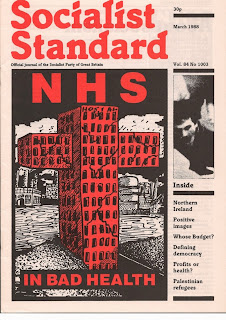 Book Review from the March 1988 issue of the Socialist Standard

The book traces the development of the key arguments about welfare in Britain. Intended as both an analysis of the main ideologies and as a source book, it contains extensive extracts from various publications in which positions about welfare are being argued; including a pamphlet issued by The Socialist Party. Three significant periods are examined, with a brief historical introduction to each period.

In Part One, "The Birth of the Welfare State (1900-1914)", the main arguments concern the role of the state in welfare. Supporters of the laissez-faire free market view resisted any extension of state intervention and emphasised individual responsibility. Where self-help failed the Poor Law, and the charitable relief of distress aimed at the "deserving poor", were the answer. The notice issued by the Charity Organisation Society to those who applied for assistance makes it clear that, even for those concerned "deserving", little help was forthcoming. The New Liberals were influenced by the growing body of evidence that the misfortunes of the poor were caused by inadequate incomes (rather than the inadequacy of individuals) and, following a series of electoral defeats, by the significance of the working class vote for the survival of the Liberal Party. They argued that the state was the "collective will" of society and should be used as a vehicle for social reform.

The Fabian Society also criticised laissez-faire economics and took a collectivist view of the state. Fabianism is represented by the extracts from the Minority Report of the Royal Commission on the Poor Law, which dominated the debate after its publication in 1909. It sought to end the Poor Law (as did the Majority Report) and transfer "its several services" to already existing local Authorities, to be "charged with the prevention of the several causes of destitution". The Principle of Prevention meant that "far from involving any increase of aggregate cost to the community, the abolition of the Poor Law and of the Poor Law Authority will have been a most economical measure."

In contrast to the paternalistic view taken of mothers in poor families in the Minority Report (needing the "watchful influence by inspection and visitation, advice and instruction . . . ") feminists were identifying the role of mothers as another vital factor, beside low wages, in their poverty and associated ill health. There was not a unitary feminist ideology on welfare but the central concern with the poverty and welfare of women and children was a uniting factor. Differing attitudes are illustrated in the "endowment of motherhood" (family allowances) campaign. The suggestions in the National Endowment of Motherhood (1918) pamphlet by A. Maude Royden, that the endowment of motherhood would solve the vexed question of women being paid lower wages than men and would withdraw many thousands of women from the labour market altogether, were strongly opposed by other feminists. Anna Martin, who had argued in the Common Cause in 1911 for maternity benefit to be paid to the wife, contemplated the idea of a system of child endowment with dismay - a "a temptation to sloth, self-indulgence and sensuality". The authors point out that moral issues were a vital element in feminist arguments, much of it of a conservative nature which "would probably now be regarded as anti-feminist".

In the last essay on this period socialism is described as "a political approach based on a critique of capitalist society which sees many of the social problems supposedly tackled by the welfare state as caused by the fundamental structures of that society" (p 74). While the Fabians believed that their reform proposals would lead "inexorably, if slowly, to socialism, the Independent Labour Party was committed to working through the existing structures of the state. Among the extracts is part of the evidence of the Social Democratic Federation to the Royal Commission on the Poor Law, setting out practical proposals but concluding that "poverty will be the portion of large numbers of the working class whilst the land and the wealth of the country are privately owned and industry is carried on for profit".

The debate on welfare continues. Part Three - "Beyond Consensus"  - deals with the period 1970-1985 when laissez-faire arguments, defeated at the turn of the century, appear again to be in the ascendancy. The political consensus in favour of Beveridge in the post-war period is seen as a brief historical aberration and is the subject of Part Two -  "The Beveridge Report (1942-8)".

The Socialist Party published two pamphlets in 1943: Family Allowances: A Socialist Analysis and Beveridge Re-organises Poverty. It is the first pamphlet which is considered in the essay on socialism in Part Two. At a time when there was "little criticism from any quarter" for the Beveridge Report, The Socialist Party critically assessed its proposals. We are told that the pamphlet dismisses Family Allowances "as little more than an attempt to reduce the earnings of individual workers and increase employers' profits" and that recent research "seems to confirm that the reduction of wage levels was an important consideration for the government".

It is pleasing to acknowledge that we were invited to comment on the text surrounding the lengthy extracts from our pamphlet, and that some amendments were agreed. Further clarification is necessary. The authors appreciate important facts about our position. For example -

. . . it is not possible to detach one small policy area for separate consideration. It has to be set within the wider context of capitalist development. Although the issue is discussed in terms of wage levels, the key point being made is that reforms cannot solve the problems which the SPGB argued were inherent within capitalism. (p 114)

However the observation is made in a later essay that -

The tension identified in Part One between socialism's strength as a critique of capitalism (and a call for revolutionary change), and the desire to present proposals which are realisable even before such change, is particularly noticeable in contemporary debates. (p 160)


. . . it is perhaps hardly surprising that its authors simply focused on the issue of wage levels, instead of going beyond that to identify ways in which the private costs of sustaining and reproducing labour power could be effectively socialised. (p. 114)

The arguments used in the pamphlet are seen as forming a link with those of William Morris (the inadequacy of social reforms when revolutionary  change is required) and of the SDF. In 1904 a group of men and women came to the conclusion that having a revolutionary aim and a programme of reforms is contradictory. The issue of socialism must be kept clear. They left the SDF, which at the time was campaigning for Free Maintenance of schoolchildren, to form the Socialist Party of Great Britain. It is not our purpose to make suggestions about the "socialisation of private cost" of bringing up a family, or reforming some other aspect of life, within capitalism. Our sole object is socialism.

The "fundamental structures" of capitalist society arise from its foundation. What is required is a revolutionary change in the basis of society; the abolition of class ownership of the means of production, and, thereby, an end to production for sale and profit. The authors rightly point out that -

The utilisation of Marxist economics by the SPGB led them to take a fundamentally different position to contemporary feminists. Their analysis suggested that equality between men and women could only be achieved through revolutionary change.

This has never meant that women must passively wait for some new dawn, rather that reforms to benefit women (like other reforms) do not solve the problems they attempt to deal with -  witness the history of family allowances. The socialist revolution cannot take place without the understanding of the majority of the class which is dependent on the sale of labour power. It is for both women and men to organise consciously and politically to abolish capitalism and establish a condition of things where there is economic and social equality between all human beings. It is the way to end both poverty and "welfare".
Pat Deutz