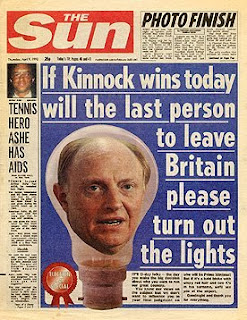 
Anyone who suffers from a sense of being unvalued, or disregarded, might find some relief in the recent experience of Neil Kinnock. Or rather the Noble Baron Kinnock of Bedwellty, previously Member of Parliament, Leader of the Labour Party and of Her Majesty's Loyal Opposition, European Commissioner, Chairman of the British Council...and lifelong supporter of Cardiff City Football Club, recently promoted to the Premier Division and infamous for the aggressive, disruptive behaviour of its fans. In September he went to watch Cardiff play Fulham at Craven Cottage. Although a seasoned football follower like Kinnock should have known better, he chose to sit with his family among the Fulham supporters. In the twelfth minute Cardiff scored a goal which had Kinnock, in his own words, 'wildly ... expressing great joy, standing up...' Within a minute he got some attention from the stewards who 'advised' him to move his party to the Cardiff section of the crowd, where they were greeted '...with some warmth'.

The Sun
Shortly after the exposure of his antics at Craven Cottage Kinnock was in the news again, competing with Ed Miliband for sympathetic attention during the Daily Mail campaign about the Labour leader's father 'hating Britain'. He said he had similarly suffered, especially during the 1992 general election when the Sun had devoted its front page to the infamous headline 'If Kinnock wins today will the last person to leave Britain please turn out the lights' followed on the day after the election with the claim that 'It's the Sun Wot Won It'. He also had something to say about the Daily Mail editor, the gruesome Paul Dacre, who complained that Kinnock had avoided going to lunch with him when the only purpose in doing so would have been for Dacre to observe whether Kinnock held his knife and fork properly. This was all a part of Kinnock's assiduously constructed image of the humble son of a Welsh miner who won his way to a sparkling education and then to almost the very top in government. But it said nothing about his own readiness to attack opponents, particularly those in his own party, as abrasively as anything thought up in Fleet Street. One of Labour's leading lights during Kinnock's time, Denis Healey, praised his 'incandescent oratory', a possible example of which was his attack at Labour's 1985 conference on the Liverpool members for their 'far-fetched resolutions ... pickled into a rigid dogma, a code ...the grotesque chaos of a Labour council ...hiring taxis to scuttle round a city handing out redundancy notices to its own employees'.

In the sea
Kinnock was elected leader at the 1983 Labour conference in Brighton. To celebrate he went for a walk along the beach accompanied by his wife and a clutch of TV cameras. It turned out to be somewhat symbolic. This young, loud, fiery left winger walked too close to the encroaching tide, a sudden surge knocked him down onto the wet shingle, he quickly scrambled to his feet and turned to face the cameras laughing defiantly and waving a clenched fist to show how he would punch out anyone who denied that this was a new Labour Party. His mission was to purge the inconvenient ideas which some restless party members still regarded as essentially matters of principle. Like all that nonsense in Clause Four about the ownership of the means of production and exchange (which had to wait for abolition until Tony Blair); unilateral nuclear disarmament; local parties having too much say in making national policy; those pesky Militant people who had come into the party nursing tortuous intentions to radically change society. With the hand of the insidious Peter Mandelson on the tiller Labour navigated through two elections, in both of which they fooled themselves that they were on the verge of power (in the after-assessment of their 1992 election one of their perceived mistakes was the 'triumphalist' – taking too much for granted – style of their eve of poll campaign). In the end Kinnock's aggression against any ideas which he saw as voter-repellent was not effective. He retired from the scene with the unenviable record of being the longest-serving Leader of the Opposition to fail to make it to Prime Minister. It was not at all as he had envisaged it, that day he fell into the sea.

Peerage
But there were other, very lucrative, opportunities open to him – such as European Commissioner, which in 1976 he had described as 'a tariff club administered by an unelected commission and a bureaucracy with the principal objective of sustaining a capitalist market economy' but which, during his time in office between 1995 and 2004 (while he imposed savage cuts in staff wages and pensions) yielded him some £2.5 million in salary, expenses, pension and the like. Shortly after his term in Europe came to an end he announced that he had '...accepted the kind invitation to enter the House of Lords as a working peer for practical political reasons'. He was not deterred by his established reputation as a bitter opponent of the Upper House, for example in 1976: ' The House of Lords must go – not be reformed, not be replaced, not be re-born in some nominated, life after death patronage paradise, just closed down, abolished, finished'. In case he was misunderstood, in 1977 when the MPs walked to the Lords to hear the Queen's speech to open Parliament he stayed defiantly seated in the Commons alongside the Beast of Bolsover Denis Skinner.

Blair approval
Kinnock's story has been a bit like someone recovering from a serious illness; one after another the symptoms of all those fevered days as a troublesome, agonisingly ambitious left-winger died away to be replaced by convalescent signs of conformity. He strongly supported Michael Foot in his turn-about over the Falklands War, including the sinking of the Belgrano. And he backed the British attack on Iraq on the feeble excuse that the infamous liar Tony Blair had assured him that the Americans would safeguard the situation there after the war. Such political acrobatics were, of course, warmly approved by Blair, who noted in his book A Journey that as a result of Kinnock's leadership the Labour Party became 'broadened and ...more popular'. Nothing more needs to be said about Kinnock's relentlessly cynical betrayal of so much that he once proclaimed as promises to radically transform society to humanity's benefit. An overview of his time reveals his passionate support for Cardiff FC to be a lone example of consistency.
Ivan
Posted by Imposs1904 at 1:18 PM