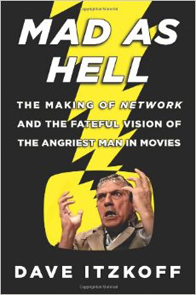 Book Review from the October 2015 issue of the Socialist Standard
'Mad as Hell: The Making of Network and the Fateful Vision of the Angriest Man in Movies', by Dave Itzkoff (Times Books, 2014)
In 1976, MGM released Paddy Chayefsky’s Network, a film that would change the way people saw television. It tells the story of Howard Beale, the distinguished senior anchorman of a major American network, who suffers an on-air breakdown. ‘I’m going to blow my brains out right on this program a week from today,’ he announces, explaining that he ‘just ran out of bullshit’ to broadcast. The network executives are horrified and plan on firing him, but after seeing the effect his rants had on the show’s ratings, decide to keep him on. An increasingly inflamed Beale abandons all pretence of objectivity and uses his top-rated show to whip millions into a frenzy over the injustices he sees in society. Impressed, the network commissions a slate of new programmes showcasing violent crime, terrorism, political extremism, and paranoid prophecies of doom—all with the sole purpose of channelling viewers’ fear and outrage into market share and advertising revenue.


Network caused a sensation when it was released. It was loudly denounced by television journalists, who saw it as an unconscionable attack on the nobility of their profession, but it went on to sweep the Academy Awards with a record-setting ten nominations and four wins. Despite this, the film is virtually unknown to today’s audiences—and when it is shown at all, viewers take it as a straight-up drama rather than the sly but radical comedy it was written and received as in the 1970s. As contemporary screenwriter Aaron Sorkin aptly put it, ‘No predictor of the future—not even Orwell—has ever been as right as Chayefsky was when he wrote Network.’
In Mad as Hell, Dave Itzkoff of The New York Times recounts the curious story of how a film as anti-establishment as Network ever made it to the big screen. In Itzkoff’s analysis, thatNetwork got produced at all may well have been a happy historical accident: MGM had found themselves missing out on the counterculture wave that was sweeping Hollywood, and so, desperate for a box office hit of their own, acceded to veteran screenwriter Paddy Chayefsky’s demands for total creative control over his next film. Chayefsky used this highly unusual grant of authority—which exceeded even that of the film’s director—to ensure that his dystopian world was faithfully translated from screenplay to film. That Network so pointedly attacked the medium of television was of no concern to the studio, which at the time had no relationship to any television networks apart from the occasional sale of broadcasting rights for their films. Whether MGM would have produced such a film today is another matter entirely. ‘In an age when all the major broadcast networks are now either owned by or affiliated with a motion picture and entertainment conglomerate,’ observes Itzkoff, ‘it is hard to imagine a studio turning its guns on itself the same way.’
Mad as Hell faithfully documents Network’s entire production process, from early drafts of the screenplay up to postproduction and pre-release marketing, and goes on to recount and analyze the controversy and critical acclaim the film garnered upon its release. Of greatest interest, however, is the book’s final chapter, which discusses how Chayefsky’s nightmarish vision of a world that has eroded away the distinction between information and entertainment has finally come to pass. Itzkoff attributes this to a significant relaxation in antitrust laws and federally mandated broadcasting standards, coupled with a proliferation of cable TV channels. While journalism has never been truly objective, before 1987 US broadcasters were at least nominally required to be honest and to provide contrasting views. Itzkoff explains how ‘informational’ television today is dominated by shallow, tabloid-style programming, making good use of interviews with veteran newsmen who have variously resisted and embraced the new regime.
Itzkoff is equally astute at identifying the film’s enduring contribution to popular political discourse. Though neither Paddy Chayefsky nor his mouthpiece Howard Beale are socialists, they are both acutely aware of the ills of global capitalism and of the urgent necessity of the population at large taking some sort of radical, corrective action. (‘We are right now living in what has to be called a corporate society, a corporate world, a corporate universe,’ laments Beale at one point in the film. ‘This world quite simply is a vast cosmology of small corporations orbiting around larger corporations who, in turn, revolve around giant corporations, and this whole, endless, ultimate cosmology is expressly designed for the production and consumption of useless things.’) Network, Itzkoff concludes, was all about ‘awakening its viewers to ugly and unflattering truths about their lives and the world they inhabited, and it did not communicate its messages in a subtle or soft-spoken manner: it put its most urgent and passionate ideas in the mouth of a man who at times is literally screaming them at his audience, commanding them to go to their windows and scream their dissatisfaction themselves.’ Indeed, what sets Beale apart from his countless successors—both in the film and in real life—are his perceptiveness and sincerity. He proclaims himself to be ‘mad as hell’, but he is not deranged; he is lucid and insightful, and his anger is no mere shtick. The real tragedy of Beale—and of Chayefsky—may be that they failed to offer their enraptured viewers any real solution to the problems they so effectively articulated.
Tristan Miller
Posted by Imposs1904 at 11:26 PM