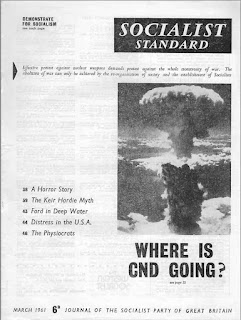 From the March 1961 issue of the Socialist Standard

Although the Mercantile system was abundantly criticised, it was a long time before opposition to it became formed into a new doctrine. Such a new system of economic thought arose in France, its chief advocate being François Quesnay. He gave his doctrine the name Physiocracy—the rule of nature.

François Quesnay (1694-1774) was the son of a lawyer. He graduated as a doctor of medicine and became a physician to Madame de Pompadour and Louis XVth, His principal writings are the Economic Tables, 1758, and General Maims, 1758.

Quesnay's teaching is something more than economics; it appears to be part of a general philosophy. Setting out from the materialist notions of his time, he wanted to have social and moral phenomena regarded as being no less "natural" than physical phenomena; and the laws governing the former as well as the latter were to be seen as mechanical laws of nature.

The natural right of human beings in primitive society, he argues was the right to property—that is the right to the free disposal of goods which the individual has made or appropriated by means of his own labour. When at a later stage, men, for the better safeguarding of their natural rights, entered into the social contract, it was essential that they should not lose the right each of them had to earn his own living. Bound up in this right is another natural right of the individual—the right to foster his own economic interest and to shape his own future as best suited to him. This following of self-interest, according to Quesnay, leads to the establishment of a "natural order" in the economic association of human beings.

This doctrine of self-interest was eventually erected by Quesnay into a finished system. He endeavoured to study the laws of the economic "natural order", which were to be deduced by reason from the general plan of nature. This doctrine of "natural order" is important to him for two reasons. First, inasmuch as the pursuit of self-interest is regarded as an idea of natural right, a system of economic individualism is for the first time established. Secondly, the persons who, in their economic life, act consistently because they are guided by motives of self-interest, resemble atoms with fixed properties. The phenomena that result from their mutual contacts (in the market and elsewhere in society) are mechanically determined like those that result from the mutual contacts of the atoms. It follows, says Quesnay, that political economy, like the realm of material nature, is governed by natural laws.

To the question of what activity of the individual it is that regulates the economic machinery, and upon what foundation economic life depends. Quesnay answers—upon natural economic activities, namely agriculture. Agriculture is for him the source of all the wealth of the nation. Not money, trade, traffic and industry, but the tilling of the soil is the true source of public welfare. The former activities merely transform matter and move it from place to place; they are not creative. The agriculturist renders them possible by nourishing those who engage in them, and he supplies the raw material without which they cannot be undertaken. Commerce, industry and transport are to be considered as dependent upon agriculture.

The Physiocrats put the matter thus. The countryman gets hides, leather, and in the end his boots and other articles from his oxen; wood, and in the end his tools, from the trees on his farm; and so on. But, they said, to avoid the wasting of materials and energy, it is better that he should not himself undertake the work that transforms these basic materials, but should have it done for him by various specialists (the tanner, bootmaker, joiner, etc.) whom he must support of his agricultural surpluses.

The only productive, the only creative labour is, therefore, labour on the land. It is true that work which transforms materials derived from land, or moves them from place to place, can enhance the value of these things, but the cost of the supplementary labour is really defrayed by the agriculturist, who must feed the workers who perform it. The increase in value this produced is, therefore, according to the cost of the labour and is equal to the expense of maintaining the workers who do it. Such labour is once again covered and made good by labour on the land. The tanner, joiner, etc. who shape the raw material derived from land work merely earn their own keep in the form of wages; they make nothing new. All they do, says Quesnay, is to "add" not to "create". The agriculturist's work is a work of creation; the industrial workers perform only a work of addition, of transformation, or of transport.

Thus the class of landowners (consisting in those days chiefly of tenant farmers as contrasted with the landowning nobility) appear to Quesnay to be the only "productive" class. The land owners, on the other hand, form an "owning" or "distributive" class, while the industrialists and craftsmen comprise a "sterile" class.

These three classes are considered to be the "active" classes of the population, whilst the wage earners make up a fourth, a "passive" class, with no economic activity of its own.

Agriculture cannot continue to be prosperous, adds Quesnay, unless grain realises high prices, for only then can agriculture provide a large "net product"* and thus become able to provide large incomes for the landowning class, the manufacturers, and the working class, and in this way diffuse general prosperity. It was essential, therefore, to do away with all restriction upon the export of grain—Quesnay completely rejected the mercantilist theory of the balance of trade. The demand for free trade was an inevitable result of his views.

The Physiocratic system also gave a picture of the formation of value and of price. In certain connections Quesnay emphasized the nature of value as utility but with his doctrine of net product, value and price and derived from cost. In his view the transformative labour of industry added to goods only so much value as this labour itself consumed—only an amount of value therefore equivalent to its own cost. It follows from this that for Quesnay wages represent nothing other than the cost of replacement of the labour power that has been expended. Wages are merely the equivalent of subsistence.

* Quesnay uses the term "Produit Nett" as signifying the surplus of the raw produce of the earth left after defraying the cost of its production.