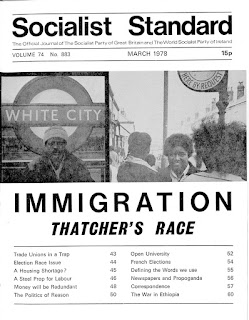 From the March 1978 issue of the Socialist Standard

There is a spectre haunting the politicians—the spectre of elections. And when that ghost walks, the politicians suddenly remember that there are votes to be won and lost. They then recall that their future jobs depend on workers' votes. So as the doubtful day gets nearer, the politicians scurry about looking for vote-catchers. One such vote-catcher could be the immigration issue; which is why Mrs. Thatcher has recently tripped over it.

Race and immigration serve a double purpose for capitalism. First, they can be used as straight-forward vote winners for the politicians. By trading on the prejudices that capitalism and its politicians have themselves instilled into the working class the politician hopes to suck in the votes of irrationality. Second, the race issue has at least one important function — it provides a "easy answer" to the difficulties of capitalism and so turns attention away from the problem. The result is that instead of the real issue, Socialism or capitalism, confronting the electorate at election time, the issue of race is thrown up. While the workers are busy blaming each other for their problems (the whites blame the blacks, the blacks the jews, the hews the Irish, the Irish the protestants etc, etc.) instead of seeking the real causes, capitalism continues in safety.

Crude Attempt
Mrs. Thatcher in her speech on Granada TV (30/1/78) has made a crude attempt to steal the National Front's clothes in a search for votes. Her remarks caused a political storm;—so what did she say? She began with a suggestion that by the end of the century there would be 4 million people of the "new Commonwealth and Pakistan" in this country. Note the double talk from the start. She is supposed to be discussing immigration—she is actually discussing coloured immigration. But she knows that of she said there will be 4 million blacks or coloureds here, that would lose her votes. So she disguises the prejudice with the words "new commonwealth." Who is deceived?

Mrs. Thatcher continued in her best stockbroker voice: "Now that is an awful lot and I think it means that people are really rather afraid that this country might be rather swamped by people with a different culture . . . (Transcript in The Times 31/1/78). It is worth stopping on this passage for a minute. Note that Mrs. Thatcher says that people are afraid. Later in the interview she said: "We (presumably the Royal "we" means she is aiming for the crown as well as the PM?) are not in politics to ignore people's worries: we are in politics to deal with them." What Mrs. Thatcher is saying is that she accepts the prejudices that capitalism creates, and far from pointing out their causes, she is going to do her best to trade on them. This is emphasised by her ridiculous phrase about being "swamped" by different cultures. First, how 4 million could "swamp" some 55 million is quite baffling. Second, note again the double talk of "different cultures." What different culture there is, soon vanishes : coloured children are growing up on baked beans, Coronation Street and skate boards just like their white brethren.

Cultural Relations
The ultimate reason why immigration must cease, claims Mrs. Vote-catcher, is "that if we get them coming in at that rate people will turn round and we shall not have good race relations with those who are here." This is of course the ultimate sick-joke. People are afraid says Mrs. Thatcher, (something which The Times editorial of the next day ignorantly echoes). Of what are they afraid? That we are not directly told—presumably by inference it is of this culture that is going to swamp them. But the one way this fear (if it is the fear) would be broken down is just the opposite of Mrs. Thatcher's panacea. If there is fear, it is of the unknown; of the different life-styles so called. If there were more immigration, not less, people would mix more with those different cultures and by force of assimilation those fears could vanish. Besides, coloured immigrants are soon absorbed into the "culture" of the council estate, the production line, the office routine, the dole queue, the worker's daily drudgery that Mrs. Thatcher is so anxious to preserve intact for the true blue British working class.

One thing Mrs. Thatcher has done, is to bring the immigration issue squarely onto the election platform. So the Labour Party, equally desperate for the votes of both the immigrants and the racially prejudiced, rush in trying to ride both horses at once, and fail to stay in the saddle of either. The Labour Party's racialist credentials are of course well known. Mr. Callaghan was the Home Secretary at the time the previous Labour Government passed the notorious Act preventing British passport holders from East Africa entering the country—the first time a British government had passed legislation openly discriminating on the grounds of colour. No sooner had the last echo of Mrs. Thatcher's speech died away when the current Home Secretary hurries out figures to reassure the racialist Labour voters. "Immigration into the United Kingdom fell sharply last year according to provisional figures released yesterday by Mr. Rees." (The Times 4/2/78) Mr. Rees went on to say that in 1977 an estimate 70,000 immigrants were accepted in this country compared with over 80,000 in 1976 and over 82,000 in 1975. The implication is that the reduction will continue under a Labour government. Still reaching for the other horse, however, some government ministers and Labour Party members rant about "commitments" and "humanitarian grounds" etc. The implication intended here is that they are in favour of immigration and are "entitled" to the immigrant vote. In the same Times report Mr. Healey accuses Mrs. Thatcher of trying yo grab the Alf Garnett vote. Funny that though—it was Mr. Healey's party which quietly accepted the support of Alf Garnett's political incarnation—Enoch Powell—at the first 1974 election.

Economics
Ultimately immigration is not about race, colour, culture, or swamps; it is about economics. How many workers do the capitalists need? If there is a shortage, as there was in the 1950s and to an extent in the 1960s, capitalist politicians (Powell included) will tell the world about the delights of British wage-slavery to workers of all colours. If there is a surplus working population, with unemployment, as at present, capitalists will seek ways to halt immigration and even talk about "repatriation" of its surplus workers. The former Prime Minister, Mr. Heath, understands all this and is quite open in his hypocrisy. In a report of a radio interview he gave he says of the previous Conservative government: "We saw no reason why we should allow in a large number of immigrants unless we NEEDED THEM FOR A SPECIFIC PURPOSE and, at the moment, we do not." (The Times 1/2/78—emphasis added). Very true—capitalism doesn't really care about colour—it cares about profitability. For that it needs workers of any colour. When it has too many of these expendable creatures, it puts some on the waste tip (the unemployed) and to try to ensure those tips don't get too unsightly and spoil the landscape unduly, it shuts the door on others.

A cynical business yes—but the politics of capitalism cannot work in any other way.
Ronnie Warrington

1) Ronnie Warrington was published under the initials of RAW.
2) For some reason, the Socialist Standard articles of this period would sometimes include bolded paragraphs. Don't ask me why.
3) Not one of the best Socialist Standard front covers but, believe it or not, it doesn't even come close to being the worst.