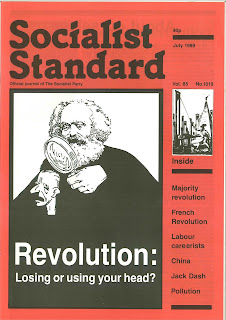 When I last saw Jack Dash he lay dying in an East End hospital; he said he knew that his time had come, but hoped that he had contributed his bit to the struggle of his class. The time before that we sat in a pub and argued with the ferocity that good friendship allows. Although we were separated in age by half of a century, and in ideas by an even greater gulf, Jack and I were real mates. He was a marvellous story-teller, and able poet who could recite with passion and sing old cockney songs in ways that brought their class origins to life. When, a few years ago, a discussion circle on Marxism was set up in Jack's flat it was a pleasure to see how willing he was to think afresh about the complexities of Marxist theory: in all his years of being praised and vilified as a "Marxist" he had found little time to delve into the complexities of the history of our class, and it was tremendous to share in the process of such discovery when giving talks to Jack and his friends at those informal classes held on the eighteenth floor of a tower block.

Three passions governed Jack's political life. He was a member of the Communist Party. A real loyalist: not a word would he hear against the Socialist Fatherland which dominated his political vision like Jesus on the Cross in the mind of a God Squad zealot. Secondly, he was a militant trade unionist. Never an official man, Jack. The T & G tried to offer him official posts, but Jack preferred to stick to the rank and file. "You win strikes with the men, not sitting in a union office making plans for them", he would say. He knew the docks as if they were his home and the dockers as if they were family: to sell them out would be like stabbing a relative in the back. He said of the TUC that "there are more knights around the table than there were at King Arthur's. If I'd had my way they wouldn't be knighted but neutered". Thirdly, he loved the arts: poetry (Shelley was his favourite, but he liked plenty of others, including the required "Soviet: writers) and paintings and songs and plays. When Unity Theatre (the first working-class theatre in London to put on radical plays) were being built he volunteered as a labourer. His partner on the site was Paul Robeson who stayed with Jack while he was in London; Jack would complain about Robeson hogging the bathroom in the morning and singing at the top of his voice. Imagine that: months of having one of the finest singers ever to live annoying  you with his unpaid entertaining as you prepare for a hard day's work in the docks.

Uncritical of Russia
Capitalism is a monstrous system which makes fools of worker's ideals. As a socialist, the present writer was hostile to Jack's Leninist politics. Without a doubt, he wanted a better world to love in. When the present writer described the socialism that we so urgently need to establish, Jack would be filled with enthusiasm. His hatred of the profit system and hunger for something new are not to be sneered at. But for all of that he was an unrepentant Stalinist. Not a word of criticism would he ever voice against the atrocities committed by the state-capitalist police state which exists in the Russian Empire. He would lose no time in apologising for it. When Stalin was purging millions of so-called enemies of "socialism in one country", Brother Dash was there to explain that most of Stalin's crimes were invented by the capitalist press, and the others were justified by the "counter-revolutionary" activities of Stalin's opponents. When Khrushchev denounced Stalin, Brother Dash pointed out that Stalin had gone too far, but now the socialist state was in safe hands. All of the obscene corruption of the Brezhnev years was defended without the merest hint of criticism. When the so-called Eurocommunists began to express complaints about all not being perfect in the Russian proletarian paradise, Brother Dash denounced them as anti-Marxists—or, to use the crazy terminology of the mixed-up "Communists", enemies of "Marxism-Leninism". When Gorbachev introduced the latest reforms, in an effort to integrate the Russian Empire more fully into the capitalist world market, Brother Dash agreed that this is what had to be done in order to modernise socialism. It was one long lifetime of having to pretend that black was white: that oppression was freedom and state capitalism was socialism. It was a life of having to close one's eyes to the Russian bureaucrats whose privileged lifestyles compare well with the fatcat profit-takers who are the capitalists in the West. The poverty of so many East European wage slaves was something to be denied, just as a Tory denies the same social features in Britain.

Why do men who are filled with a burning hatred of the inequities of the profit system allow themselves to be dragged down into this web of self-deceit—and then, inevitably, the deceit of others? Why do they blind themselves, these Stalinist dogmatists who refuse to admit that the whole Bolshevik project has been the most awful disaster for the workers who have been its victims? Here we enter the field of political psychology; it is a field which socialists may have to tread upon a few more times before we complete the road between here and human liberation. One factor in it is the sectarian need to stick to the Party line. The CP says that Russia is the Socialist Fatherland and it is the duty of every loyal comrade to prove that true. When loyalty to the organisation—any organisation—overcomes commitment to historical truth (to honesty), then all is lost in a terrible sectarian haze. Perhaps another motive was the desire on the part of some workers to be able to imagine that an alternative to capitalism was actually in existence. A sort of self-delusion to offer comfort to those who have to live under and suffer the miseries of capitalism. Bogus socialist countries might serve to soften the hardship of living in a world which is really dominated from top to bottom by the capitalist system.

Whatever the motives for the irrational faith in the phoney socialism of the Leninist states, socialists must expose the dangers of such beliefs. Fortunately, history is doing our job for us: these days it is mainly the old-timers who still entertain the crass fantasies about socialist countries existing (although there are plenty of younger leftists who are gullible enough to accept variations on the same old Leninist theme). Sadly for Jack, after years of loyalty to the CP, he was forced to leave it shortly before he died. There has been a very recent split between the Communist Party of Great Britain (which is the Marxism Today official CP) and the Communist Party of Britain which remains loyal to The Morning Star and its uncritical stance towards Russia. (There is yet another CP—the New Communist Party—which argues that even The Morning Star is not Stalinist enough and only they are the true inheritors of the truly fascistic outlook of the heyday of the 1930s.) Jack could  not bring himself to talk about the split which was accompanying the collapse of the CP; he just went on as of nothing has changed, pretending that his little faction was the party.

The Dockers' Way Out
As for his loyalty to the dockers, how ironic it was that Jack died a month after the government announced its intention to abolish the Dock Labour scheme. On the day he died hundreds of dockers went out on unofficial strike after the courts had refused to accept the legality of a three-to-one vote (by secret ballot) in favour of striking. What bloody audacity this this: a government passing laws telling the unions that strikes must be preceded by ballots and then sending in the unelected Judges to declare such a ballot illegal because a dockers' strike could damage the national interest! The fact is that the dockers are up against a system which cannot make profits out of them like it used to and so they are being prepared for the economic slaughter. Jack had fought with admirable militancy back in the 1960s when containerisation threatened the wages and conditions of the dockers. But King Capital is mightier than the mightiest defender of the working-class interest. There comes a point at which defence will not do the trick. Only tackling the wages system itself, with its right to exploit for profit, will prevent the dock employers winning. The dock workers, some of whom marched for Enoch Powell in the late 1960s and voted Labour like sheep to the slaughter are not yet in a position to take on the system. That is what they must do. Only by organising to abolish the wages system, with its employment and jobs, and not by the pathetic demands of "Jobs for Life", will the dockers really win.