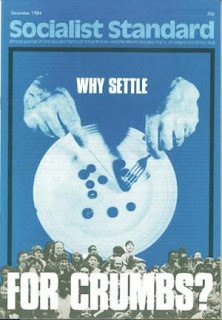 Grimethorpe again
The Yorkshire village of Grimethorpe, scene of one of the fiercest clashes between police and striking miners, is no stranger to class war. It was here, in 1947, that the miners were forced to use the strike weapon in defence of their living standards in an incident which revealed the true nature of the recently nationalised coal mines.

At that time the industry generally was still congratulating itself on having got rid of the greedy, complacent and inefficient private coal owners; there was a Labour government presiding over "socialist” Britain. with their propaganda that workers should work harder and restrain their wage demands so as to help rebuild the export trade of the British capitalist class.

It was in that cause that the National Coal Board tried to tighten the exploitative screw on the miners of Grimethorpe by requiring them to produce more coal during each shift — by increasing their "stint". But unfortunately for the NCB and the Labour government the miners would not agree to this lowering of their standards and they came out on strike, in which they were soon the victors.

Unfortunately too for the NUM, whose general secretary was prominent in his denunciation of the strike. This remarkable fact is made even more so — in view of recent events in the coalfields — because the secretary was a member of the Communist Party, Arthur Horner. The Communist Party were then following the tactic of supporting the Attlee government’s attempts to get British capitalism back on its feet. It was consistent with this that the CP opposed strikes, even those like Grimethorpe where the workers were up against an antagonistic government, as they are today. This attitude was soon to be reversed when, as the Labour government’s foreign policy became more settled in opposition to that of the Russian ruling class, the CP turned to opposing them and so to supporting strikes.

The lesson is clear: as long as capitalism lasts the working class must always struggle to protect their interests, without compromise, and they must make this their own, conscious struggle instead of trusting leaders.


Plus ça change . . .
At least Margaret Thatcher has never made any secret of the fact that she and her government stand without hesitation for the interest of the British capitalist class. When they support a programme like cutting back the coal industry and sacking thousands of miners they do not pretend that this has anything to do with socialism.

What then of France, where there is of course a “socialist” President whose election was greeted with such enthusiasm as the dawn of a new age of equality and freedom for the workers? In 1981 Mitterrand was promising, in an election speech, that his government would "end years of neglect” of the coal mines there and increase production from 19 million tons to 30 million. No wonder the French workers were so enthusiastic; it is usually attractive, to someone dependent on employment for a living, to assure them that their exploitation is secure for the foreseeable future.

But as it has turned out that has been yet another of Mitterrand's pledges to have been dishonoured. The future for the French miners is, if anything, blacker than that for the British. For example in the case of the coal field of the Nord-Pas dc Calais region, the French equivalent of the National Coal Board would like to shut down production completely by 1990 — and this in what was once the heart of French coal mining. The famous target of 30 million tons has been gently dropped, and even the present target of 18.5 million tons is being reduced to 12 million by 1988, which means that about 28,000 miners will be lopped off the industry’s workforce.

The reason for this drive, which must be the envy of Ian McGregor, is that the French industry operates at a deficit of over £730 million a year. Like the British mines, this is a burden which the capitalist class as a whole are not prepared to carry indefinitely.

One difference between the two countries, however, is that the French miners are not struggling against these demands.

What protest there is is desultory and disjointed. Perhaps their reaction to this latest exposure of left wing political heroes makes them cynical and apathetic. In fact it should persuade them of the futility of all leaders and of all promises to make capitalism work against its nature. The failure of Mitterrand was inevitable; a careless response to it by the workers is not.


Blow-up at Dunlop
Michael Edwardes got his knighthood because of the sterling work he has done in rescuing several large industrial concerns which, before he took over, were apparently due to go out of business. The list of these firms is impressive in its length and in the prestige involved; it includes names like British Leyland and ICL. When Edwardes had finished his work with them, they were usually a lot more profitable than when he began (which is what he means by “rescue") and quite a few productive units had been shut down with a lot of workers thrown out of work.

There was simple justification for this. If something didn’t pay Edwardes did his best to make sure it didn't operate any more. He also took on the unions, most famously at British Leyland, so that they ceased to present so large an obstacle in his drive for the maximum of exploitation, the maximum of profitability.

So it was not surprising that when the great Dunlop tyre company also dropped into danger the 46 banks who are owed something like £385 million by the firm cast wistful eyes in Edwardes’ direction. Any money they had sunk in keeping this ailing giant on its feet, the banks reasoned, would be that much more secure under the control of the diminutive, ruthless, profit-preoccupied supremo. So one of those commercial assassinations was arranged, in which Edwardes took over at Dunlop, bringing some of his henchmen from ICL and firmly removing eight of the existing directors.

The outgoing chairman left with a barely coded warning of Edwardes’ “. . .methodology, his way of dealing with people, which in this way removes the continuity of the business". But of course Edwardes “deals with" people in exactly the correct way for this social system. Capitalism’s basis of private ownership of the means of life puts people on the same level as everything else which goes into the productive process. If they make money they will be employed; if not they will be discarded.

Of course people are a bit different from machines; for one thing they have feelings, which can sometimes be inconvenient to 24 hours a day, seven days a week exploitation. Such considerations may convince Edwardes that this is a less than perfect world. What it tells the workers, to judge from their reactions, is anyone’s guess.