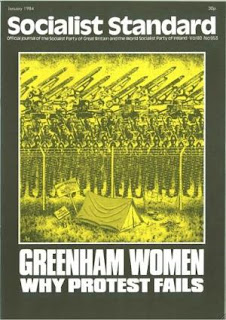 Like no tomorrow
For some reason it was offered as a criticism of The Day After that it told us something we already knew — that a nuclear war would bring unprecedented destruction and suffering. In fact, as many commentators pointed out, the reality will be far worse. One estimate is that in a 220 megaton attack on Britain 80 per cent of the population will die. Everywhere it will become frighteningly cold and dark, as the nuclear dust blots out the sun and brings a new Ice Age in which people in the mass will starve or freeze to death.

Perhaps the most chilling part of the Film was in the build up to the holocaust — the palpably heightening tension, the strained faces listening to the news, the first announcement of the use of “tactical" nuclear weapons, the missiles blasting out of the silos, trailing smoke across the sky behind a washing line, released when servicemen opened a red box marked “Gently”. It was too close to experience for our comfort — too close to Berlin 'in 1948, Korea in 1951, Cuba in 1962 and to the numerous other international crises when the world might have been under threat of having no tomorrow.

Was The Day After an argument for unilateral nuclear disarmament or for the Heseltine policy of eventual disarmament through eventual agreement while the powers meanwhile build up their nuclear arsenals? Of course, CND claimed that the film made their case for them, forgetting that it portrayed the culmination of the international rivalry which is endemic to the capitalist system. CND have no concept of what is needed to end that system, although to end it is the only way in which the world will be rid of war and all weapons of war.

Heseltine is a different case. He and his party make no bones about their support for the social system of division and conflict, the system which makes a priority of killing and destruction. No nonsense from the Defence Minister about the urgency to avoid the ultimate, overwhelming catastrophe; he stands unashamedly for capitalism and for the interests of the British ruling class, at whatever the cost to the rest of us.

But beneath their superficial differences, at their core CND and Heseltine stand for the same thing. They all support capitalism although in varying degrees they may seek to evade some of the effects of the system. By confusing the issue, by pretending that capitalism can be controlled and reformed into benignity, they each in their own way aggravate problems such as war.

If The Day After told us anything it was of the desperate urgency of the work to overthrow capitalism and to replace it with a society which will not know war. That is not one of the facts which can be devalued as something everyone knows already. If it were more widely accepted, the future of the world would be more secure and tomorrow would be a matter of happy anticipation instead of fear.


One for the rich . . .
In court seven teenagers admitted that over fifteen months they made 28 raids on local restaurants, breaking in to steal drinks, food and cigarettes; they also asked for 30 other offences to be taken into consideration. The value of their hauls totalled £1,435; they were ordered to pay £1,527 in fines, compensation and costs (Guardian, 30 November 1983).

The culprits were pupils at the exclusive Darlington School in Devon, where parents pay £8.000 a year each for their keep and “education”. The payments ordered by the court must have made quite a dent in the pocket money of the accused. No doubt this will be made up by doting parents who, not long ago, howled for the dismissal of the then headmaster of the school who had warned them of under-age sex, burglary, vandalism and drug taking among the pupils, and they had objectcd to some “unsuitable” pictures of his wife which had appeared some years ago in a magazine.

No prize is offered to the first reader sending in the most likely punishment which the court would have doled out if, rather than being the pampered offspring of the rich, the offenders had come from the streets of Brixton.


Glasses and classes
How is a member of the working class to be recognised? Lord Curzon, the archetypal High Tory of his day, thought that it was by the colour of our bodies; he had no idea, he remarked as he watched some soldiers bathing in an Indian river, that the lower orders had such white skins.

Ridiculous Labour MP Frank Dobson has recently suggested another method. He fears that it might be possible to spy out a worker — or at least one of the more impoverished among us — by the style of their glasses. In the House of Commons debate last November on the government proposals to end the opticians' monopoly on the sale of glasses (which Labour MPs might have been expected to welcome) Dobson expressed the reservation that making glasses available outside the National Health Service might mark out anyone who is unable to afford other than the NHS article.

This is gradualism gone made. Will Labour MPs now fight to eliminate variety in spectacle styles, arguing that this new equality would be a step on the road to the revolution? More to the point, are there not other ways in which a worker can be distinguished?

There are. first, the places where we live. None of them is ever likely to be featured in those advertisements by the posher estate agents in Country Life. Then there are the clothes we wear; mass produced articles such as would chill the blood of the discreet tailors patronised by our masters. What about the food we eat? Whatever Robert Carrier is paid to say on TV, there are more than subtle differences between the fare on sale in Tesco and what can be ordered, by those who can afford to. from Harrods.

But above all there is the way we get our living. The fundamental, ineradicable distinguishing mark of the workers is the fact that they live through selling their abilities to an employer for a wage. The size of that wage does not vary significantly from the point of being enough to reproduce the worker in terms of renewing mental and physical energies and in the sense of bearing future wage slaves. This is the root of our poverty, the hall-mark which identifies a member of the working class and which is expressed in sub-standards in what we can afford to consume.

This hall-mark cannot effectively be obscured or concealed, no matter how some workers may try by pretending to a life style which is not actually available to them. Indeed it is futile and reactionary to make such efforts, for if workers faced the reality of their poverty they would thereby be taking one of the first steps to its abolition.

And then there would be another way in which a worker could be recognised — by their class-consciousness and their activity in the struggle to establish a classless, povertyless society.


Keep off the beach
When the bombs went off over Hiroshima and Nagasaki, and tens of thousands of people died, we were consoled that there was a positive side to this unprecedented event. Nuclear power is a source of energy which could be used to produce electricity, endless and safe and cheap. It could be an age of new prosperity. Nuclear power, said the authorities, was good for us.

There were some doubters who muttered inconveniently about the dangers, that there was such a thing as radioactivity which could leak and that an accident at a nuclear power station could lead to frightful consequences. The authorities were reassuring. There would be no accidents; the designers would see to that. Radioactivity was easily controllable. Nuclear power was good for us.

Well, since those innocent days there have been incidents like the Three Mile Island melt-down and the leaks at Windscale, which have blighted the surrounding land. Now the sea too is under threat, as the nuclear waste discharged from Windscale comes ashore as a menacing oily slick, polluting the fish and the seaweed and the beach itself. Nuclear power, the authorities still tell us. is good for us. Meanwhile we must stay off the beaches while they try to expunge the memory of the incidents by renaming the power station which will henceforth be known as Sellafield.

The history of nuclear power is one of the search for a source of cheap energy. This search did not happen in the interests of human beings but for the sole reason that the owning class are concerned that commodities should be produced as cheaply and reliably as possible. Cheap, reliable production means more competitive goods; it means a better chance of capturing markets, of more assured profits for the owners of the means of life.

In this process the welfare of human beings is of lesser consequence. The search for profit and capital accumulation has a sordid history of pollution, to the point of killing people and destroying elements of the environment. Nuclear power stations are a typical phase in that history. In a sane society, based on human interests, nuclear power would be of vast benefit to the world; free of the restraints of production for profit, it would be safe in its method and its design. It is capitalism which makes of it a polluter and destroyer, so that at places it is unsafe to walk on the beach, to pick up a pebble, to touch the seaweed.

Nuclear power may well be good for us. It is capitalism which is bad for us.