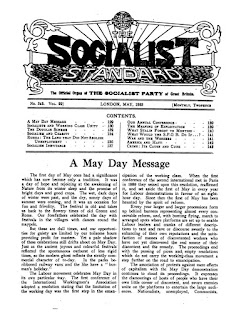 From the May 1933 issue of the Socialist Standard

The first day of May once had a significance which has now become only a tradition. It was a day of hope and rejoicing at the awakening of Nature from its winter sleep and the promise of bright days and good crops. The wet, dark days of winter were past, and the dry, sunny days of summer were coming, and it was an occasion for fun and frivolity. The festival is old and takes us back to the flowery times of old Greece and Rome. Our forefathers celebrated the day with festivals in the villages with dances round the maypole.

But these are dull times, and our opportunities for gaiety are limited by our toilsome hours providing profit for masters. Yet a pale shadow of these celebrations still drifts about on May Day. Just as the ancient joyous and colourful festivals reflected the spontaneous outburst of less rigid times, so the modern ghost reflects the strictly commercial character of to-day. In the parks beribboned railway vans and the like have a "busman’s holiday.”

The Labour movement celebrates May Day in its own particular way. The first conference of the International Workingmen’s Association adopted a resolution stating that the limitation of the working day was the first step in the emancipation of the working class. When the first conference of the second international met in Paris in 1889 they seized upon this resolution, reaffirmed it, and set aside the first of May in every year for Labour demonstrations in favour of an eight- hour day. Since then the first of May has been haunted by the spirit of reform.

Every year larger and larger processions form up behind banners representing almost every conceivable reform, and, with bunting flying, march to arranged spots where platforms are set up to enable Labour leaders and cranks of different descriptions to rant and rave or discourse sweetly to the enhancing of their own reputations and the satisfaction of masses of discontented workers who have not yet discovered the real source of their discontent and the remedy. The proceedings end with the passing of pious and empty resolutions which do not carry the working-class movement a step further on the road to emancipation.

The association of protests against mere effects of capitalism with the May Day demonstration continues to cloud its proceedings. It expresses the clamourings of hosts of people who have their own little corner of discontent, and sworn enemies unite on the platforms to entertain the large audiences. Nationalists, unemployed, Communists, trade unionists, anti-vivisectionists, labourites and reformers of myriad hues unite in more or less vague protestations against the powers that be— protestations that are utterly futile because there is no effective power to back them up.

Our May Day message is now twenty-eight years old, but it is still the same, and it is still fresh and to the point. The capitalists own the means of production and distribution, and owing to this they are able to keep the worker a toiling slave. Ownership of the means of production and distribution is assured to the capitalists through their control of political power, a control that the worker gives them when he votes them into power at election times. The way to freedom lies through dispossessing the capitalists of the power they wield and the instruments they control. This can only be accomplished by obtaining control of Parliament for the purpose of establishing Socialism. This is the common task of the workers the world over regardless of race or colour. The purpose and the determination necessary are the same on every other day of the year just as much as it is on May Day.

As spring awakens hope let it awaken those who are sunk in apathy to the real promise of the future, and stir them to grapple with the fundamental problems of working-class life.

On this May Day then, as usual, we send forward a message of fraternal greeting to our fellow-workers of all lands, whether they be Jewish or German, Hindu or Russian, white or coloured. We urge them to join with us in the work of overthrowing the power that keeps them in bondage and to refrain from placing trust in ideas of leadership or in vague aspirations that only have the heartbreaking end of disillusion and apathy.