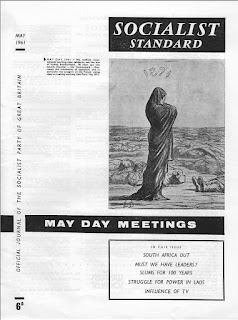 Editorial from the May 1961 issue of the Socialist Standard

Each year, as the first of May comes round, it is our custom to reflect upon its significance for the working class. For the better part of fifty years we have devoted either the editorial or leading article of the Socialist Standard to May Day.

We do not need to check on every past issue to know what all those editorials have said. If there is any essential difference to be found between them it will be in their growing awareness, as each May Day comes and goes, of the widening gulf between the present and the past. The May Day of today is but a pale shadow of those gone by.

All those editorials will have spoken about the origins of May Day in the struggles of workers in the past. Of the way in which it has gradually been losing its meaning for them in the present. Of how its message has been distorted and degraded over the years by so many people and parties claiming to be Socialist—but who are far from being so. Above all, they will have reflected on how an event born in the spirit of the international brotherhood of the working class has become an occasion for displays of the crudest nationalism and military pageantry, and of the way in which an idea that, for all its shortcomings in practice, at least had some relevance to the movement of revolutionary Socialism, has deteriorated into an annual charade for the prime benefit of the Labour reformists of the world.

And how long will it be before they cease to keep up even this pretence? The charade is already developing into farce. May Day, if it is not dead, is rapidly dying.

What, then, are Socialists to make of May Day? Convinced that the only hope for the world lies with international Socialism and that May Day should be a unique occasion to demonstrate this, what are we to think of its debasement by the reformist prattlings of Labour leaders or the parades of nuclear missiles through Moscow’s Red Square? Should we be disheartened by such travesties of the meaning of May Day and write it off in despair? Of course not.

Say what we will, May Day reminds one of the few occasions capable of enthusing workers to come together and demonstrate politically. That we consider their politics to be wrong only serves to confirm that it is the duty of the Socialist Party to seek to convince them that our policy is right. May Day gives the opportunity—from our platforms, through our literature, and by discussion with them as individuals—to do just this.

This year we are holding two open-air rallies, one in London and the other in Glasgow. Each of them will be followed by a large indoor meeting in the evening. It is for each and every member of the Party in both cities to do his utmost to make them a success. The results of the Party’s effort at Easter, in spite of atrocious weather, show what can be done.

In a world of sordid nationalism and political reformism, the cause we stand for is international Socialism. Let us then demonstrate for this, the only fundamental thing worth demonstrating for, more confidently and more effectively than ever before, this May Day, 1961.

For we should not regard it as just another May Day. On the contrary. It is a further opportunity—a fine opportunity—to spread the message of Socialism.

Let us make the most of it.

Email ThisBlogThis!Share to TwitterShare to FacebookShare to Pinterest
Labels: Editorial, Labour Movement, May 1961, May Day, R1961