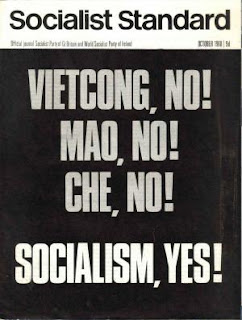 From the October 1968 issue of the Socialist Standard

Following its much-improved representation in the Dail Eireann at the last General Election, the Labour Party has increased its political activity and talks of a new approach to politics. Amidst an atmosphere of enthusiasm and inspired by increasing party membership, their leader Brendan Corish voiced his plans for the future in an address at the Labour Annual Conference in Dublin in October l967. This has been published as a pamphlet under the title The New Republic. The laying down of a definite policy together with the re-affiliation of the Irish Transport and General Workers' Union has roused curiosity in all quarters and has paid-off by further swelling Labour's ranks.

There was no lack of optimism and speculation in the address. Indeed, Corish commenced by forecasting “the seventies will be socialist” for the people of Ireland. In July the Dail (parliamentary) members of the Labour Party met four hundred delegates from all over Ireland to draft a new manifesto and to consider the developments which had taken place since the last conference.

One new development that Labour has to face is the referendum due to be held later this year on the abolition of the Proportional Representation system of voting. Statistics suggest that if the referendum abolishes PR in favour of the single-member constituency system in England, it would perpetuate the Fianna Fail government for a further ten years. Also, it would probably reduce Labour representation in the Dail to a mere handful since most of Labour's members are elected on the second choice votes by pro-Fine Gael and anti-Fianna Fail supporters.

Even if PR were retained there is a ludicrous tinge in Corish's prediction. Though he has succeeded in doubling his party's numbers in the Dail (from ten to twenty), he would have to increase it by a further fifty to gain power. He has also to convince a politically hostile electorate—manifest in the way, except for two short periods of coalition government, they have continually returned Fianna Fail to power—of the desirability of his new republic—and he has to do this between now and November next year. With Ireland's biggest trade union, the ITGWIJ, now standing firmly behind the Labour Party Corish certainly has a chance of increasing his representation, but the chances of gaining power are very thin.

It would be impossible to gain a majority of seats in the Dail without the support of the farmers and since on the whole they are very conservative, Labour has not the appeal in the rural areas it has in the towns. The only probable way of ousting Fianna Fail is by forming a coalition with Fine Gael, the main opposition party. But after Labour's being the minor party in two previous and disastrous coalitions—with the consequent charge of selling out “socialist" principles—Corish has assured his members that Labour would not join another coalition. We shall see.

The Labour leader listed the major wrongs which, to a people who hide beneath the robe of Roman Catholicism rather than face the truth, were carefully worded so as not to provoke the ever-ready guillotine of the Church. He confronted people with what they already know and what many accept as the will of God. Old age pensioners are expected to survive on a few shillings a week. In the forty-seven years of Home Rule a million Irish men and women have emigrated. Ireland, he said, was “starved of employment". One after another Corish pointed out the problems which are not peculiar just to Irish workers but are common to workers everywhere—though his strong national-mindedness seems to have blinded Corish on this point. His particular grievance is that “£600m. of Irish capital is invested in the biggest money-market in the world" instead of invested in Ireland!

The solution which Corish says will solve these problems is the abolition of private enterprise, and the establishment of “socialism". Socialism, it is true, is the correct solution, but what according to the Labour leader is “socialism"? His excuse for failing to give a clear meaning is that “people who call themselves socialists differ in their definitions of the word". But since the Labour Party claims to accept the ideas of its founder, James Connolly, let us consult his writings to see how he used, or abused, the word.

Connolly's idea of “socialism” centred round the Irish Republic for which he and James Larkin tried to rally the workers to take up arms and fight. His Republic, he said, would not be like the United States where "the power of the purse established a new tyranny under the forms of freedom, one hundred years after the feet of the last British redcoat polluted the streets of Boston"—a remark which brings out Connolly’s nationalism and his hatred of the British. Connolly alleged that in his Republic the workers would enjoy the fruits of their labour. Maybe he would have changed his mind if he had lived long enough to witness the effects of the Russian revolution when they tried to set up “socialism" in one land.

When the first world war broke out De Valera and Connolly appealed to the workers not to follow John Redmond's support for Britain. Connolly quite rightly pointed out that the Irish workers' quarrel was not with the workers of another land (Germany), but he and De Valera were continually soliciting the Irish workers to go into battle with the British army in Ireland (consisting of course partly of Irish and partly of English workers).

Corish stated that in his new republic all Irish capital would come under the control of the state; that the banks would be brought under the direct control of the Dail, and that all capital would be invested in Ireland to build industries. If Labour comes to power and successfully executes these plans, he believes that the workers will no longer have to swell the labour forces of other countries. Then Ireland might wrongly be called “socialist", but it would be just another state capitalist country not more able to further the cause of Socialism than the existing ones which have tried and failed.
Patrick Garvey

"Corish has assured his members that Labour would not join another coalition. We shall see."

Corish led the Irish Labour Party into a coalition government with Fine Gael in 1973.