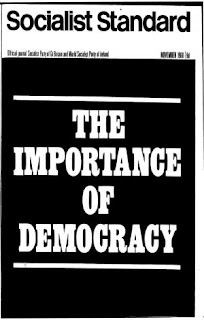 From the November 1968 issue of the Socialist Standard

November 1868 is a significant date in British working class history. For in that month was held the first general election in which the majority of electors were workers. Most workers, it is true, were still excluded but enough had the vote to elect a majority of socialist delegates had they wanted to. It is true also that the Second Reform Act of 1867 was a miserable compromise between the Tories and the Liberals, both of whom were opposed to democracy and afraid of giving the vote to too many workers.

In 1832 the workers had been tricked into backing their employers' demand for a share with the landed aristocrats, big merchants and bankers in running the government. The First Reform Act was framed so as deliberately to exclude workers and in fact, in some cases, they were actually disfranchised. This was not an experience they easily forgot. The manufacturers had used the threat of a workers' uprising to scare the governing classes into sharing power with them. One of the first acts of the government elected under the new franchise was to reform the Poor Law system: they made it harsher in order to drive people into the factories (or, as they would say today, to encourage “mobility of labour”). Partly as a result of this for the next decade or so the government was, in Chartism, faced with the real threat of a workers’ uprising.

Chartism, the first independent workers’ political party in the world, was an expression of general discontent with early capitalism. Their six-point charter, which included universal manhood suffrage, added up to a demand for a democratic state. They were convinced that with democracy the workers could reshape society in their own interests. This was well expressed in the words of one of their songs: “We will get the land, when we get the Charter”. It was this emphasis on the need for winning political power that commended Chartism to Marx and Engels and it taught them that the workers’ class struggle must become political. The Chartists in fact failed to achieve any of their aims. Their last monster demonstration in 1848 failed ignominiously. Faced with the choice of passively accepting parliament’s rejection of the Charter or insurrection they backed down. The more determined kept up the struggle for a few more years coming to absorb the ideas of the French utopian communists like Babeuf and Blanqui and even those of Marx and Engels.

By the 1860’s the trade unions, after years of syndicalist-type opposition to “wage-slavery”, came to accept the wages system and put forward the conservative slogan of “a fair day’s wage for a fair day’s work.” Their leaders were rejecting violent overthrow of the the government in favour of working for small improvements within the system.

The manufacturers, who were the gainers from 1832, were now eager to push out the old landed aristocracy and have the state machine all to themselves. The successful Anti-Corn Law campaign led by Cobden and Bright had whetted their appetite. They saw as one way of increasing their control to extend the suffrage to their workers who they knew would vote for them. So despite the failure of Chartism the Reform issue was raised from time to time after 1850. However, the restricted franchise did not allow the radicals their due weight inside the Liberal party. The Whigs, themselves landed aristocrats, still had a great say and Lord Palmerston refused to allow a Reform bill. When he died the way was clear and in March 1866 Gladstone introduced a Bill which by lowering the property qualification would have given the vote to many workers. But the Whigs had their last fling. Some forty of them voted with the Tories against the bill. The government resigned and a minority Tory one took over. Almost immediately they were faced with a country-wide Reform agitation. Bright on behalf of the manufacturers’ National Reform Union called for ratepayers’ suffrage while the trade unions and the First International backed the Reform League which, like the Chartists, stood for universal manhood suffrage. It was the League that organised a great demonstration for 23 July at Hyde Park which the government banned. The organisers refused to accept this and the demonstration went on. The crowds pulled down the railings at Hyde Park and swarmed in. The fear of insurrection and a revival of Chartism, suggested by this, scared the government and Disraeli introduced his own Reform bill, more radical even than Gladstone's, in order, as he said, “to dish the Whigs”.


Marx commented favourably on the tactic of playing off one section of the governing classes against another which the workers had used to get factory laws. The passing of the Second Reform Act presented the same spectacle. The Tories proposed to give the vote to all ratepayers in the towns, while the Liberals wanted a steadily falling property qualification. Since the Liberals had a majority in parliament the actual Act, which with similar ones for Scotland and Ireland increased the electorate from 1,350,000 to 2,470,000, was a compromise.

If Disraeli had hoped to gain the new voters' gratitude and so dish the Whigs he must have been disappointed. The 1868 election returned Gladstone with a big majority. The new government then set about stripping the aristocrats of more of their privileges: they reformed the civil service and the universities; they disestablished the Church in Ireland; they brought in compulsory elementary education. Once again the workers had been used by the manufacturing capitalists as tools in their fight against the landed aristocracy. But this time it was voluntary. The workers allowed themselves to be used in this way. The new voters of 1868 set an unfortunate precedent which has been followed at every election since: they used their votes to hand over political power to the capitalist class.

One of three Tory Ministers to resign was Lord Cranbourne (who later as Lord Salisbury was three times Prime Minister). His complaint was that power was being transferred to

those who have no other property than the labour of their hands. The omnipotence of Parliament is theirs.

Marx and Engels took a similar view. Writing on the Chartists in the 1850's they had pointed out that universal suffrage in Britain would amount to political power for a class-conscious working class. They seem to have regarded the Second Reform Act as a “radical sham” and a travesty on democracy, as indeed it was. But, although fearing a “pro-slavery rebellion", Marx knew its significance as he showed in his famous speech at the Hague in 1872 when he stated that in America, Britain and perhaps Holland the workers could win power for Socialism peacefully, by winning a majority in a general election.

The government extended the franchise to workers in Britain under pressure, partly from the workers themselves and partly from some capitalists who saw this was in their interests. The workers' vote is a real gain, a potential class weapon which should, in Marx’s phrase, be used as “an instrument of emancipation". The government could not, as some claim, now suddenly suspend democracy, for besides being essential to the smooth running of modern capitalism, it is part of the political consciousness of the working class. By their past actions, from Chartism to pushing down the railings in Hyde Park, they have forced governments to take their views into account. Nor is universal suffrage a fraud, as these same people claim, a trick to convince us we have some say in the running of social affairs while the real decisions are made elsewhere. Parliament does control how the state machine is used—whether troops stay East of Suez or fight in Aden, what the police should do to control riots outside the American embassy, what laws the Courts should enforce—and universal suffrage does allow workers to choose who shall sit in Parliament..