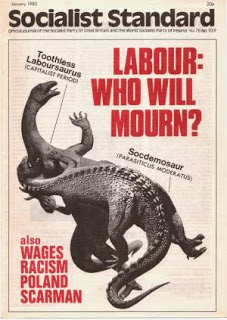 That creaky old monster, the British Labour Party, is in danger of drowning. Even with a Tory government presiding over mass unemployment and endless cuts, Labour’s “alternative” is seen by many workers to be equally unappealing. There are some who may be shocked at the Socialist Party of Great Britain failing to mourn the demise of a political institution which for seventy-five years has claimed to stand for workers’ interests. But the record of Labour governments of strike breaking and cutting workers' living standards in the way the profit system demands, proves their claims to be untrue. To find the root cause of the problem, we must move from the Labour Party’s death throes to its birth pangs.

In the 1870s, after a long history of persecution, British trade unions were legalised, and in 1874 two miners elected to parliament. But by the mid-eighties still only eleven MPs were workers, although the working class formed about three-quarters of the population. After 1867, only a minority had the vote and the Liberal Party and the Conservative Party took it in turns to run capitalism, much as the Conservative and Labour Parties have done since the First World War. There was sometimes little to choose between them, but many workers preferred the Liberals, who made particular efforts to appear more radical than their rivals. The working class lacked unity, but mechanisation and concentration of capital reduced the divisions between skilled and unskilled labour. Large-scale production encouraged workers to recognise their shared class position as one of poverty and dependence, squalor and insecurity.

In the 1880s, small political groups were formed, such as the Fabian Society, the Social Democratic Federation and its break-away group, the Socialist League. Some of their members, particularly those in the Socialist League, had a very clear view of socialism as a system to replace the world order of capitalism, and of the need for democratic action to set up a system of production for use rather than profit. The majority of workers did not support the socialist proposal of freeing themselves from their wage-slavery, and the eleven MPs referred to above voted in the House of Commons as Liberals. A debate arose as to whether workers should try to get representation in Parliament on the basis of supporting capitalism, or whether the movement for socialism should first work towards majority support and then use Parliament to end the system rather than run it. The former idea, which was to win the day at the turn of the century, was expressed by Hubert Bland in Today, June 1887:


A popular organisation must be created for the express purpose of working existing political machinery (our emphasis).

At the same time, the Liberal Gladstone announced that he was prepared to “back the masses against the classes” (The Times, 29/6/1886), that is, the workers against the capitalist class, although he was so “radical” that he regretted the “leaning of both parties to Socialism, which I radically disapprove” (J. Morley, Life of Gladstone, ii. p.346). In fact, both parties were simply making concessions to workers to win their votes, and Lord Randolph Churchill more cautiously wrote that “we have so to conduct our legislation that we shall give some satisfaction to both classes and masses”.

The boom conditions of the late 1880s helped the formation of the “New Unions”, such as the Gasworkers’ and General Labourers’ Union and the General Railway Workers Union. John Burns and Tom Mann of the Social Democratic Federation organised the famous London Dock Strike of 1889. The new trade unions of this time were less exclusive than their predecessors, with lower subscription dues and more emphasis on industrial action to improve wages and conditions. But the early 1890s saw a return to trade depression, higher unemployment and consequently greater pressure to lower wages. The employers organised something of a counter-offensive on the industrial field, and the high increase in union membership of the previous decade again fell.

In 1890, the Shipping Federation was formed by shipowners to allow jobs only to those prepared to work with non-union men. In 1893. William Collison formed the National Free Labour Association as a supply of blackleg workers. In 1896, the Employers Federation of Engineering Associations was founded, to oppose the Amalgamated Engineers, and the following year the Federation responded to strikes with a six-month lock-out, which slack trade enabled them to afford. In 1898, the Employers Parliamentary Council was established to ensure direct influence at Westminster. The law courts began to reverse the terms of the 1870s statutes and overturned precedents in cases such as Lyons v. Wilkins and Quinn v. Leathern, outlawing picketing. In 1901 the House of Lords confirmed the Taff Vale Railway Company’s demand for damages resulting from industrial action by the Amalgamated Society of Railway Servants, amounting to £23,000, which the union had to pay.

These repressive measures of about ninety years ago renewed the debate about what action workers could take. Many trade unionists supported parliamentary representation to secure legal rights for trade unions. Some argued that the Liberal Party, which many had traditionally supported, would be unable to do this, and this view was justified by the Liberal Party’s difficulties at the time. Many of their capitalist backers were going over to the Tories, partly because they wanted import duties to protect their industries from German and American competition. Liberal support for capitalism had to be blended with “the new aspirations of the labouring masses out of which the party of the future must spring” (Manchester Guardian, 11/5/1894). But there was no reason in principle why Liberal or Tory capitalists in Parliament could not support limited aims like trade union immunities and various social reforms. In any case, the idea of working-class members of Parliament carrying out these measures themselves was hard to implement. Before 1911, MPs were not paid and had to be financed, so workers approached the Liberal Party asking to be nominated as candidates. Again and again, the local Liberal caucuses refused such requests. Among those they refused were Keir Hardie and Ramsay Macdonald, who were later to sit as Labour MPs.

In 1893, the Independent Labour Party was formed. Its aims included tax reform, an eight-hour day, and “collective ownership of the means of production, distribution and exchange”. Exchange implies private property, though, and this contradiction is repeated in the Labour Party’s famous Clause Four. What it means is state ownership, or nationalisation, which is not socialism. The Fabian Society had been trying to “permeate” the Liberal caucuses in order to exert a secret influence. Unlike the Militant Tendency, they eventually admitted that this was a futile waste of time. The attempts of the TUC Parliamentary Committee to get Liberal backing met with little success, and so the idea developed of forming a separate party with the financial backing of the trade unions. Three points in particular are worth noting about what happened. It was not a movement for socialism, it only involved a very small minority of the working class, and it was not democratically organised.

Aside from the question of trade union rights, the reform issues adopted were similar to those of the Liberal Party: opposition to the Boer war, improved workers’ compensation, and that classical capitalist policy, Free Trade. (Later on, the Labour Party sometimes came to support instead that other reputable capitalist policy, Import Controls.) At the turn of the century (as now), very few workers actively stood for socialism. In the 1895 election, not one of the thirty-two ILP candidates was elected, and they merely stood for nationalisation, rather than common ownership. If there were a majority of socialists, millions of them, they could easily have financed some of their number to go to Parliament with a mandate immediately to abolish the profit system. But what there were instead, were trade unionists, many of whom were bitterly opposed to socialism.

In 1899 the TUC voted 546,000 to 434,000 to try to increase the number of workers in Parliament. Hardie secured an ILP majority on the executive of the resulting Labour Representation Committee, with his friend Macdonald as secretary. The same year, Hardie was elected at Merthyr Tydfil with the help of £150 from George Cadbury, the chocolate baron. In 1903, Gladstone made a secret pact with MacDonald that the LRC could have a clear run in thirty constituencies, provided that they demonstrate friendliness to the Liberals where possible. At the same time, the “rank and file” at the LRC Conference were actually voting that its candidates must “strictly abstain from identifying themselves with, or promoting the interests of, any section of the Liberal or Conservative Parties”. In one constituency the LRC wanted to put up a candidate where a Liberal planned to stand. Macdonald wrote to the local secretary threatening: “my executive will even go to the length of publishing a condemnatory resolution in the newspaper”.

From 1900 to 1906, the membership of the trade unions which were affiliated to the LRC increased from about a third of a million to about a million, while the membership of the constituent “socialist” groups remained at about twenty thousand, falling to fourteen thousand from 1901 to 1904. The greatest number of votes polled by the Labour Party before the First World War was about 500,000 in 1910, about one tenth of the electorate. Those workers elected as “Lib-Labs” in the first years of this century were prepared to co-operate in parliament with LRC independents, for the sake of expediency. By the 1906 election, the leaders Hardie, Macdonald and Henderson had organised the skeleton of a national political machine, modelled on the established parties. They devised a programme which only contained reform measures compatible with capitalism. Their glorified trade-union pressure group was preparing to replace the Liberal Party in its role of alternative government of capitalism. The Labour Party was born by the “back door” method of collaboration with the Liberal Party itself. In the Liberal landslide of 1906, twenty-nine out of fifty LRC candidates were elected. The ILP and Fabian Society by then accounted for less than a fiftieth of the affiliated membership.

As the Liberal Party floundered, the Labour Party rose, based on active participation by workers in the system which exploits us. In 1904, the Socialist Party of Great Britain was formed. In the first issue of the Socialist Standard, in September 1904, there was an editorial opposing the LRC with good reason: the LRC members had no common principles, but only the name “Labour”:

Unity is only possible among those who possess common principles. Unity cannot, therefore, be secured for any length of time by the members of the Labour Representation Committee, but even if it could, the body is not based upon Socialist principles

which is the reason for the lack of unity in the Labour Party today. That first issue also said of the Independent Labour Party:

Having neither the courage to proclaim themselves Socialists nor to disavow Socialism, they are today coquetting with that working-class wing of the Liberal Party - the Labour Representation Committee. When the question of Socialism was raised on the committee, their chief representative declared that was neither the time nor the place for such discussion.

The victory for compromise marked by the rise of the Labour Party may have seemed complete, but it was not permanent. The Labour governments which have been formed since, have proved the impossibility of trying to legislate against the ugly effects of the profit system. The Labour Party was formed on the basis of popular support for capitalism, and it has become one of the major institutions of that system. Workers need not sorrow for it in its old age, or run to carry the SDP baby which is really its uncle. Now, more than ever, there is a chance, and an urgent need, to build a party to end capitalism, not to run it.
Clifford Slapper
Posted by Imposs1904 at 8:22 PM