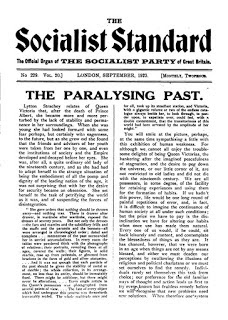 
“Only under an individualistic system can we each enjoy the fullest liberty, and the public be well served.”.—Lord Leverhulme, "Reynolds,” 1/4/1923.

Sounds plausible, if you are in the habit of shutting your eyes, opening your mouth—then swallowing. What is Liberty? We may see more clearly its relative meaning if we examine the composition of this somewhat mysterious body of people, “The Public.” Who are they? Lord Leverhulme is one, the ex-Service mendicant.is another, the strumpit of the wealthy idler with £20,000 worth of jewellery hung around her body, and the daughter of the underworld selling her sex for bread; the teeming millions of propertyless labour power sellers, and the small minority who own their means of livelihood; all are comprised within our Lord’s ambiguity, “The Public.” Stripped of its cant and examined in the light of reality, "serving the public” merely means that Leverhulme's trust, like any other capitalist concern, employs workers to produce wealth because the value of their total output exceeds in large proportion the value of the wages paid to those required to produce such wealth. Neither capitalists nor shareholders render "service” in such production, they may depart to any part of the earth their pleasure takes them, and never see or know the source of their profits and dividends; all the operations necessary will proceed as per usual, carried on in every department by the workers. The master class are only concerned with serving their own ends. They will destroy wealth or restrict its production if it enhances their profit, or employ you in the production of death dealing aeroplanes, bullets and poison gas (with which the workers have been "well served”) for the same reason as Lord Sunlight, exploitation with the object of profit. To tell you, dependent as you are for your existence, upon those who own the earth and its resources, that you “enjoy the fullest liberty,” is evidence of the contempt your masters have for you. The dictionary describes a slave as: “One whose person and services are wholly at the disposal and under the control of another ” (Lloyds).


How fitting such a description is to the worker of to-day—and yet! he would be provoked to indignation at the appellation “slave,” for he has no chains, he can go to his job in the morning (when he’s got one to go to), and he can go home (!) at night; and when his master hasn’t any further use for him, he can go to that nasty place the Christians tell us about. And this he calls “Liberty,” not because he is a cynic, or has seen the grim humour of it all, but because his masters have taught him to believe it is the birthright of Britons, “who never, never, will be slaves.” From the days of those Christian humbugs, the Liberal Cotton Lords, who fought against the introduction of the Factory Acts in order to retain the “Liberty” to work children to death, to the modern vampires of imperialistic exploitation, “Liberty” has ever been the cry of our rulers, ’tis but the cry for “ Liberty ” to exploit and plunder the workers. Clear your mental vision by a study of Socialism, then the verbiage of such as Leverhulme will be rated by you at its clap-trap worth. You cannot have “Liberty” within a system that enslaves you, neither can it be benevolently bestowed upon you. “Know ye this, who would be free must strike the blow.”