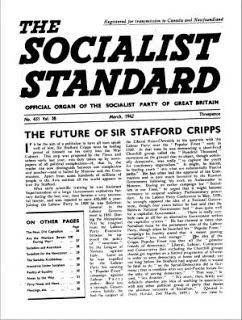 You told me, Mr. Newcomer, that you were fed up. Something was wrong. You worked hard, and studied your master’s interest. Seldom drank, didn’t bet or waste your money. But you never seemed to get on. The wife wasn’t the same now, either. Always dissatisfied. Seemed to think that it was your fault, that you were a failure. So you took to going to our meetings. You said you couldn’t always understand. The speaker didn’t get down to the language of the man in the street. Well, don’t blame the speaker. He has enough to contend with, and he cannot please everyone. Why not buy The Socialist Standard regularly each month, and read the articles? You see, they are written for you and your pals. I don’t think you will find scientific Socialism so hard to understand. Anyway, isn’t it worth it. A few minutes’ study, once a month, in order to understand and to gain the knowledge required to sweep away the troubles and evils which are ruining your life, and the life of your wife too.

There is an old song, Mr. Newcomer, the people sometimes sing. It goes, “Britons never, never shall be slaves.” Most of the people have a queer distorted idea of what slavery is. Usually, they think of coloured men being driven on by the overseer with a long whip. Others think of “enslaved peoples” under Hitler. Then again, sometimes one hears of miners being referred to as “slaves of the lamp,” and so on. It’s rather amusing that the average worker would be very much on his dignity if this epithet of “slave” was applied to himself. So, Mr. Newcomer, if you really wish to understand the implications of Socialism, you must expect some shocks. Truth is not always palatable.

When you left school, the first thing you did was to look for a job, because you had to start and earn your living. You had to obtain the wherewithal to provide yourself with food, clothing and shelter. Whatever happens, you must pay your rent. But we are going too fast, Mr. Newcomer. Before you began work you either wrote a letter in answer to an advertisement, or you just called in and enquired if a boy was wanted. If you wrote a letter, you started off with "Sir,” and after anxiously informing the employer that you were strong, healthy and honest, you probably pleaded for an interview at his convenience, and finished up by signing yourself “Your humble servant.” On the other hand, if you called at a shop or factory where you knew “hands” were being taken on, you carefully brushed your clothes first, polished your boots, and donned a clean collar. In fact, you made yourself as smart and presentable as possible. You see, you cannot sell dirty goods usually, and you were selling something, although you didn’t know it. Later on, perhaps, you wished to change your job, in order to better yourself, or perhaps your services were dispensed with. So you went through the same performance again. No doubt you have repeated the process many times since, not now in order to better yourself, but just in order to go on living. Why have you had to do this? Here, Mr. Newcomer, is where you come up against one of those unpalatable truths the Socialists warn you about. Also we reach the point where you learn your first lesson in the science of Socialism.

You see, you are a member of the working class, and before you can earn your living you must apply humbly to the employing or master class, and beg for a job. If they think you are a suitable man, that is, strong and capable, they may allow you to work for them. If you leave your master, you must apply to another, as you know now by past bitter experience. So, in order to live, you cannot escape applying to the master class for permission to work. There are, of course, a few workers who avoid this to some extent by various means, but their numbers are so small in proportion to the rest that they can be ignored for the time being. It takes very little mental effort, therefore, to realise that you belong to a class which must always go, cap in hand, to another class in order to obtain permission to work. So you see, then, that there are two classes in society. The majority, who possess nothing but their labour power, and who are forced to sell their labour power to a smaller class who own the means of production. The larger class, who possess nothing worth while and who live by working, we call the working class. That small class, who own the land, the mines, railways and factories, etc., and who force us by sheer starvation to come and work for them, we designate the master or capitalist class. So you see, Mr. Newcomer, you cannot do anything, except sell your health and strength; your capacity to labour, for a small wage, in order to live. Therefore you must recognise that the workers are in a slave position, Always at the beck and call of the masters. So now you know why the Socialist smiles when he hears his fellow workers singing “Britons never, never shall be slaves.”

Of course, there is more than this to be said about it, and I trust, Mr. Newcomer, that you will continue with the next chat. In the meanwhile—think it over.