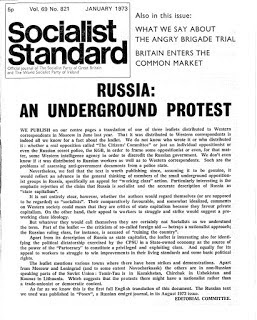 From the beginning of this month Britain has been part of the “European Economic Community", to give the Common Market its official name. This means that the British government is pledged to pursue, along with eight other West European governments, common policies in such fields as foreign trade, transport and agriculture. By 1978 all trade barriers between Britain and the other eight countries should have been removed and all nine should have erected a uniform tariff against goods coming from outside their “common market”.

For the capitalists of Britain, or most of them, this will open up a vast new market in which to try to sell their goods at a profit. But what about the workers? How will the Common Market affect the ordinary wage- or salary-earner in the factories and offices of Britain?

First, and this has already begun to happen, there'll be a rise in food prices as a result of the British government having to change its method of subsidising agriculture. Till now Britain has followed a “cheap food” policy of letting food in at lower, world prices and paying farmers the difference between this and a previously-agreed higher, notional price. The Common Market agriculture policy, on the other hand, is based on subsidising farmers and peasants by fixing selling prices, with the help of tariffs and levies, above world market level.

Rising food prices of course mean, without a compensating rise in wages, a cut in living standards. It is this that has made the Common Market so unpopular amongst workers in Britain and why the Tory government was afraid to hold a referendum on the issue: they knew it would have been seen as a vote not about the abstract question of “Britain’s destiny in Europe” Heath likes to specify about, but as a vote for or against rising food prices, with the result a foregone conclusion. The Labour Party has cynically exploited this ordinary working-class reaction and has used it, with the help of the so-called Communist Party, to stir up latent anti-foreign prejudices. Rising food prices do represent a threat to living standards, but the way to fight back is on the industrial field by pressing for higher wages not by sterile and dangerous jingoism.

The second change the ordinary wage-earner will notice is in the way the goods he buys are taxed. From 1 April this year purchase tax and SET will be abolished and replaced by a Value Added Tax (VAT). This probably won’t make much difference to the overall price level but, being something new, will (like decimilization) tend to be blamed for inflation. In any event, tax changes are insignificant from a working-class point of view.

Within ten years, however, we could be using a common European currency and voting in elections for the European Parliament at Strasbourg. And after that, perhaps, there’ll be progress towards a “United States of Europe” as another Great Power challenging the current world hegemony of America and Russia — on condition, that is, that the various nation-States can agree to give up a great deal of the power they now have to protect their national capitalist interests even against the other members of the EEC. Which must remain very much open to doubt, since up to now the EEC has been a permanent inter-governmental conference rather than a embryo super-State.

But, in any event, the emergence of such a new capitalist super-State, or the creation of a single European capitalist economy, is of no concern to the working class. Though it will affect them nevertheless. To try to mitigate these effects they will have to start thinking in terms of united action with their fellow workers in Europe. Already some trade unions, and trade unionists, have — wisely — been making contact with their opposite numbers in the other countries.

But such actions, though necessarily, are only defensive of working-class interests under capitalism. The need will remain to go beyond them and build up a political movement on a world-scale aimed at establishing a united Socialist world making frontiers a thing of the past.
Posted by Imposs1904 at 1:50 PM