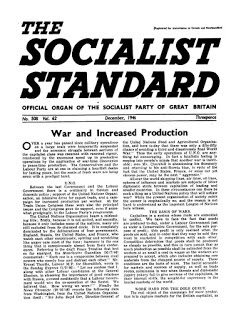 From the December 1946 issue of the Socialist Standard

Having landed themselves in a false position by taking over the capitalist government, while professing sympathy with the working class, the Labour Party have no alternative but to adopt the capitalist policy and attitude towards the workers. Hence their repeated appeals for harder work combined with restraint in wage demands. Some of the Labour leaders are doing their best to inject into the workers’ minds a sense of humility by comparison of their tasks with those of big business. Mr. J. R. Clynes, for instance, on a recent occasion, caused immense satisfaction to leader writers in the Press when he gave utterance to the following:—

"Workmen, for the most part, move in a narrow circle, and are not in a position to measure the service of others. They cannot know the part which brains play in the pursuit of trade and business.” (Daily Sketch, 19/3/46).

In modern industry the intricate sub-division of labour makes it well nigh impossible for any one section of workers to know much about the details of other sections. But there is one fact of which they can all be aware, that their combined efforts are responsible for all the wealth produced. Furthermore, the real brainwork involved in securing trade and business is done by members of the working class. Commercial travellers and advertisers push the goods on the market. Office clerks keep records of sales, costs and overhead charges, and prepare the balance sheet for the director, who reads it and congratulates the share holders.

Nearly all concerns to-day work on orders. When orders fall off it is not long before workers become redundant. So that when the trade and business chasers fall down on their job the workers bear the brunt. It works like that. No orders, no work; no work, no wages; no wages, no orders. For if wages cannot buy back the wealth produced, the dole certainly cannot. But what about the director? If he moves at all, he most certainly moves in a narrow circle. He sanctions an increase in the number employed when orders come in. He deplores the necessity to sack them when orders fall off. To the share holders he is either a financial genius or an attractive figurehead. At general meetings he informs the shareholders, with an assumption of dignity and a natural complacency, that they have the double satisfaction of earning a rich reward and serving a public need. The ordinary shareholders, knowing little or nothing about how it is done, take their reward and look round for like opportunities to serve the public on similar terms. We search in vain among this dividend-hungry crowd for any evidence of brains being actively engaged in useful work.

"Managers, superintendents, designers, inventors, directors and the like are far removed from the workers’ sphere,” says Mr. Clynes.

As far as managers and superintendents are concerned, this statement is untrue. .They are normally drawn from the rank and file and still belong to the working class. They understand and supervise the technical processes, performing a useful function all the more efficiently because of their training in the actual work. But their main task is to keep down costs, and they have at their command foremen in every department to speed up workers and machines. The foreman's aim is to become a manager, and the average worker knows in his own mind that he is quite as capable as his foreman to induce or drive his fellow workers. In a concern where understudies are ready to take over from the highest to the lowest none are far removed except that some understudies are appointed and some are not.

Designers are men and women who have qualified in art schools and technical colleges for the job. They work, for the most part, in studios and workshops under the supervision of someone who has acquired his skill in the same way. In fabrics, pottery, motorcar and shipbuilding this practice is general. The designer knows only the one job. The actual work of production is as much a sealed book to him as the supervising. He works for wages, is dependent on wages for a living, and is consequently a member of the working class.

Inventors to-day are in much the same position. They work in groups under supervision, a method that has been largely accelerated during the war. They have been regularised as a section of the working class and are exploited in the same way as the rest. Inventors no longer work independently, except in an amateurish way on gadgets of a personal kind, or for minor purposes in the home, etc. In their present position and status their ability can be directed into the channels required by their masters. Their relation to the capitalist has changed but little. The capitalist has always sucked their brains. In the old days they suffered from the lack of funds to enable them to drive a bargain, or were deliberately cheated of their inventions.

All this applies with equal force to the scientist. All have been brought under the wing of big business Their value has been assessed according to what it costs to produce them, no doubt enhanced because they are in short supply. But competition for such jobs Increases in proportion as work in the lower grades becomes more arduous, insecure and unremunerative. Mr. Clynes continues:—

“The complex aspects of industry and its national and international problems are beyond the man. The tendency to look at our national problem from just our own group standard is nearly a common mistake."

That tendency is most strikingly in evidence in the attitude of the Labour Government towards the workers. They promised an era of prosperity under Socialism if returned to power, only to find themselves confined within the narrow limits of the same old capitalist system, which they are bound to defend in the face of ever-growing resentment and hostility from the workers.

"Community interest is often upset by the vigour of a class prejudice."

In this last statement Mr. Clynes has managed to include two quite contradictory ideas. There can be no community interest in a society made up of two opposing classes, which is the actual condition in every capitalist country. Where, as in society to-day, one class owns the means of life, the rest, the working class, are enslaved. A class that is enslaved must be hostile to the master class, though, as yet, they only show it by demanding an increased share of the wealth they produce.

Mr. Clynes’s assumption of community interest is based on the lie that the capitalist class provide work and wages, thus enabling them to live. They provide neither. Wages are paid out of wealth previously produced and taken from the workers, and if orders do not come in there is no work to be provided.

There can only be a real community of interests when the working class carry their antagonism to its logical conclusion and organise for the sole purpose of establishing community ownership of the means of life.