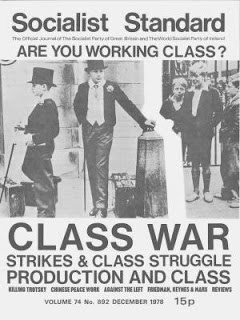 From the December 1978 issue of the Socialist Standard

The capitalist system operates according to definite economic laws which governments can neither change nor overcome; to the extent that they try to they generally make matters worse or create some new problem.

This view is quite at variance with the prevailing economic and political orthodoxy, which holds that government intervention in the workings of capitalism can ensure crisis-free growth and continuous full employment (Keynes) and that government action can eliminate poverty, bad housing, poor schools, inadequate health services, pollution and so on (reformism).

Fortunately not all teachers of economics are content to repeat parrot-fashion the theories of Keynes. Some have been prepared to examine the real world and so have not been able to avoid noticing the manifest failure of government intervention to do what the Keynesians and reformists said it would. This has led to a reaction, with a growing number of economists now arguing that the trouble stems from too much government intervention and calling for a return to what their mentor, the American Professor Milton Friedman, calls “competitive free enterprise capitalism”. Even Margaret Thatcher and Sir Keith Joseph have been toying with this suggestion.

They are wrong, of course. Pure private enterprise capitalism would be no better than the mixture of private and state capitalism we know today. But these economists can claim to have a better understanding of how capitalism works than the Keynesians and reformists, since they at least recognise that it operates according to economic laws which governments can’t change. As one advocate of laissez-faire capitalism, Nathaniel Branden has put it:


All government intervention in the economy is based on the belief that economic laws need not operate, that principles of cause and effect can be suspended, that everything in existence is "flexible” and “malleable”, except a bureaucrat’s whim, which is omnipotent; reality, logic, and economics must not be allowed to get in the way (in Ayn Rand Capitalism: The Unknown Ideal, p. 79).

We couldn’t express it better ourselves! After all, it was Marx who spoke of “the natural laws of capitalist production” as being “tendencies working with iron necessity towards inevitable results” (1867 Preface to Capital).

Milton Friedman is the new star in the firmament of capitalist economics—he was awarded the Nobel Prize for Economics in 1976, effectively for having demolished the theories of Keynes—but there is nothing especially original about his work. All he had done is to observe how capitalism works and so has noticed that it doesn’t work in accordance with Keynes’ theories.

Take the question of inflation, for instance. Although Keynes at one time stated that over-issuing an inconvertible paper currency would inevitably lead to a rise in the general price level he later came to attach little importance to monetary policy, seeing its role as merely to ensure that enough money was available to finance the government spending which the tax and investment policies he advocated would involve. He thus provided an ideal theoretical justification for governments to finance their activities by recourse to the printing press. Which is what they have been doing in all countries since the war, with the inevitable result that prices generally have been constantly rising.

Friedman has merely done a bit of historical research to show the relationship between unwarranted increases in the money supply and rises in the general price level, enabling him to conclude that rising prices was bound to be the result of Keynesian policies and will continue to be as long as they are applied. In doing this “monetarists” (so called because they disagree with Keynes’ view that “money doesn’t matter”) like Friedman have rediscovered what Marx (and other economists of his time) had stated over a hundred years ago as being the inevitable result of over-issuing an inconvertible paper currency.

Keynes was also something of an “underconsumptionist” in that he thought that capitalism needed government spending to keep it going. His followers have favoured inflation, or more exactly government spending financed by inflating the currency, as a means of trying to reduce and avoid unemployment. But that inflation can reduce unemployment has proved an illusion, as the artificial inflationary boom gives way to the sort of "stagflation” or "slumpflation” we now have, where widespread unemployment and a high rate of price rises exist side by side.

Observing this phenomenon, Friedman has applied a bit of logic and come to the conclusion that the business cycle of boom-slump-boom-slump is independent of inflation, that inflation is not a way of ensuring a permanent boom but merely results in prices rising in all stages of the cycle, during the slump as well as during the boom. Thus the choice is not, as we are always being told by government ministers, Labour and Tory, between inflation and unemployment. The level of unemployment is governed by factors other than inflation, which is essentially a monetary phenomenon independent of the real economic forces which cause unemployment to exist and to rise and fall. This "discovery” of Friedman’s has long been known to socialists though no one thought of proposing us for a Nobel Prize! Even Friedman’s general conclusion on Keynesianism—that the monetary mismanagement it involves has probably aggravated rather than stabilised the capitalist business cycle — was anticipated by Marx, who recognised that monetary bungling could aggravate a crisis originally caused by other factors.

In his book Capitalism and Freedom (1962) where he expresses in simple language his philosophy of “competitive free enterprise capitalism”, Friedman shows how reformist policies aimed at trying to abolish poverty, equalize incomes, eliminate bad housing, have failed just as miserably as Keynesianism:

Which if any of the great ‘reforms’ of past decades have achieved its objectives? Have the good intentions of the proponents of these reforms been realized? (. . .) An income tax initially enacted at low rates and later seized upon as a means to redistribute income in favour of the lower classes has become a facade, covering loopholes and special provisions that render rates that are highly graduated on paper largely ineffective (. . .)
A housing program intended to improve the housing conditions of the poor, to reduce juvenile delinquency, and to contribute to the removal of urban slums, has worsened the housing conditions of the poor, contributed to juvenile delinquency, and spread urban blight (. . .)
Social security measures were enacted to make receipt of assistance a matter of right, to eliminate the need for direct relief and assistance. Millions now receive social security benefits. Yet the relief rolls grow and the sums spent on direct assistance mount.

After mentioning some exceptions of where he thinks government intervention has led to some improvement (such as building roads, providing basic schooling, public health measures) Friedman concludes:

If a balance be struck, there can be little doubt that the record is dismal. The greater part of the new ventures undertaken by government in the past few decades have failed to achieve their objectives.

Up to this point Friedman is saying much the same as we have done: that social reforms don’t work. But Friedman is not a socialist and does not draw the conclusion we do: that this proves that capitalism is a system which does not work and cannot be made to work in the interest of the wage and salary earning majority. He thinks that if there were less government intervention then capitalism would work to everybody’s benefit!

This conclusion is of course mistaken and arises from recognising as inexorable only one of capitalism’s economic laws: the law of profits, which decrees “no profits, no production”. People like Friedman can easily see that anything that interferes with profits, generally or in a particular industry, will inevitably lead to a drop in production, so making maters worse. But there is another economic law of capitalism which the advocates of private enterprise capitalism ignore: the law of wages, which decrees that the consumption of the class of wage and salary earners is determined by what is necessary to keep them in a fit state of work and to enable them to raise and maintain a family, and that everything they produce over and above this is appropriated as profits by those who own and control the means of production and distribution. Capitalism is thus based on the exploitation and restricted consumption of the working class and, whatever the degree of government intervention, can never work in their interests.

There is another fundamental difference between Friedman and socialists. Although recognising the failure of social reforms he is himself a sort of reformist in that he is proposing changes in capitalism as it exists today in order to achieve his ideal of a "competitive free enterprise capitalism”. The concern of socialists, on the other hand, in the field of economics is to understand capitalism, to “lay bare the economic law of motion of modern society” as Marx put it, and not at all to prescribe economic policies for governments to follow.

The rise of Friedmanite economics, for all its faults and shortcomings, does however represent a return towards the more realistic view of the way capitalism works. Before Keynes, this view was held by a number of capitalist economists, and the demonstration that planning and social reforms don’t and can’t work may be unpalatable for economic “experts” and reformist politicians.
Adam Buick