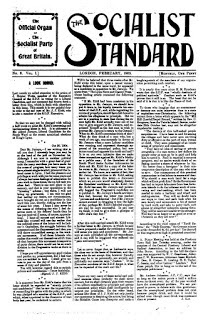 This article is intended to explain why it is that The Socialist Party of Great Britain has come into existence.

We ask you to read carefully what we have to say, because the matter concerns you intimately. You may not think so at present, but we are convinced that, if we could meet you to talk the matter over with you at length and in detail, dealing with your points of objection as they arose, we should be able to convince you that our side is your side, and that if you are concerned with the betterment of your present condition and of the condition of your class, your proper position is with us, and your attitude the attitude which we adopt.

We cannot do this in a brief article. But we will gladly arrange to meet you and endeavour to make clear anything that is not clear.

Now what is the difference between The Socialist Party of Great Britain and other bodies claiming to be Socialist ? But first of all, what is the view of the Socialist regarding the position of the working-class ?

You know well enough that at best you only receive sufficient to supply you with the barest necessaries of life. Only the very fortunate have any margin for extra comforts. At the best you are always dependent upon the employer for a chance to work so that you may live. You cannot even demand to work. At the present time great numbers are walking about absolutely unable to find a master to employ them. That number will increase. And when you have work you are never sure of its continuance. You have always the insecurity of it hanging over you.

That is the best view. At the worst, when you are worn and grey hairs show, when you give the slightest sign of age or physical weakening, your place is on the labour scrap-heap. Abject misery, appalling poverty, an outlook black as the mouth of hell.

This is no picture of the fancy. It is the bare fact. We are of the working-class. We know what we write. You know that we speak truly.

And yet labour is the source of all wealth. There are few to deny that today. Then why is it that the recompense of labour is miserable and inadequate at the best ?

The Socialist claims to know. It is because the land and factories and the railways—all the means that is by which necessary things are produced and distributed—are in the hands of comparatively few people. It doesn’t matter for the moment how they got them. It is sufficient that they are there. It is the explanation, and the only explanation of why the worker is cap in hand, a pitiable beggar. He has no property. He has no access to the means of life. He has nothing but his power to work. And he sells that for what he can get.

There are thousands of him available. All want to live. All must work to live. But to such perfection has machinery been developed that all the things for which there is any demand can be produced in an astonishingly short time. There are not sufficient vacancies for all the men available. There is not enough work to go round!

And so the men compete for what jobs there are. That is why the wages of the workers are on the average just sufficient to keep them in bare necessities. Competition for work prevents the wages rising.

That is a drastic change. Your Tory and Liberal politicians will tell you that the change can never be wrought.

Pay no attention to the Liberals and Tories. They want the basis of the present arrangement to remain as it is. They may under some circumstances agree to make some alteration that will affect some of the results of the arrangement.

But it is the basis that is wrong.

But not a moment before then.

What does the understanding of the Socialist position involve? Please try to follow us closely here because it is just here that we part company with the other bodies claiming to be Socialist.

An understanding of the Socialist position involves a recognition of the fact that the interests of those who own and control the means of life (the capitalist-class) are absolutely opposed to the interests of those who own nothing but their power to work (the working-class). The first are concerned to make a profit out of the labour of the second. The second are battling for the best conditions they can get. If the second are successful to any degree to that degree the first are losers. To the extent that the first are able to use their power to coin wealth out of the labour of the second, to that extent are the second the losers.

Don’t be put off the track by good capitalists. We are not concerned to deny that some members of the capitalist-class are genuinely sorry that the condition of the working-class is so bad and would prefer it otherwise. That is not the point. The point is that as a class their interests are opposed absolutely to the interests of the class they exploit — the working-class — and under no circumstance whatever can that conflict of interest be avoided.

It does not matter whether the working-class are conscious of it or not. The conflict is inevitable and unceasing. The Socialist calls it the class-struggle.

Some of those who claim to be Socialists — members of the Independent Labour Party particularly,— cannot see that this class-struggle exists and must exist. Which shows that they do not thoroughly understand the position. And those who do not thoroughly understand the position cannot be relied upon. They cannot instruct the workers in what they themselves do not understand. The blind make bad leaders of the blind although they are probably very sympathetic.

Now if we are agreed so far, (and we trust you will not hesitate to let us know if we are not,) what is the first step the working-class must take to effect that change in the ownership and control of the means of life which is necessary to the material and permanent betterment of working-class conditions ; upon what must their efforts be concentrated ?

Upon the capture of the political machine. That is to say they must organise and direct their forces with the object of securing control of the legislative and administrative bodies (the House of Commons, County, Urban and Rural Councils, Boards of Guardians, etc.) Why ?

Because these bodies are strongholds of the capitalist party. They form their most important line of attack and defence.

Through them the laws are made and administered that secure them in their position. Through them the armed forces of the nation are at their disposal to assist, among other things, in keeping the workers in subjection at those times when their conditions become more than usually intolerable.

The ignorance of the workers in the past has enabled the capitalists to possess themselves of the political machine. The workers all unwittingly have made the rod that is now applied to their backs. But what working-class ignorance has clone working-class enlightenment can undo.

But the working-class must thoroughly understand what they are about. There must be no confusion as to what it all means. And that is why The Socialist Party of Great Britain is in the field. We are ourselves of the working-class. The lot of the workers—our own lot— cannot be improved materially or permanently until the workers themselves have understood their position, the reasons for it and the remedy, and have themselves struck the blow which shall free them from the domination of the capitalist.

We are anxious, therefore, that the workers shall know the whole truth, shall take no leap in the dark, make no move in ignorance. Because the capitalist is very wide awake and very quick to seize any advantage that will help him to retain his power. And so to us it is absolutely necessary that the workers shall see every step of the way clearly before they take it.

Which may mean a slow advance, but it will certainly mean a sure advance.

We know that if the workers follow the lead of men who have not recognised and understood the meaning of the existence of the class-struggle they will go wrong.

If they follow leaders who are prepared to make working-class confusion worse confounded by allying themselves with capitalist parties for the realisation of reforms that cannot by any chance solve the poverty problem, they will go wrong.

If they follow any except those who are at open and perpetual war with the capitalist-class ; who will make no compromise or arrangement, either temporarily or permanently, with them, because to do so would only confuse the issues in the minds of the workers, and, by concentrating their attention upon matters of minor importance, divert them from the consideration of the real problem ; who combat ignorance wherever it is found, even when it is found in a “Labour Leader ;” who steadfastly pursue an undeviating path straight to the Socialist Republic, turning neither to the right hand nor to the left, and bearing their flag aloft to be seen of all men : if the workers follow any but these they will go wrong.

The workers’ ignorance is in the way of their advance. They want enlightenment. And to us it seems that the way to enlighten them is not to present a confused issue. They want a plain issue, clear cut, boldly defined.

They say that while the basis of Society remains as at present, that is while Society is based upon the private ownership of the means of life, the worker’s position must always remain the same in its principal features ; that municipal enterprise affects him in the mass, not at all ; that political reforms or what not leave him always the exploited, always the under dog.

They point out that these reforms are never achieved except at great effort ; that they are never achieved at all (except they benefit some section of the capitalist class) unless and until the workers have set on foot such a determined agitation that their demands cannot with safety be longer disregarded, as a glance at industrial history will show.

They point out that, notwithstanding the expenditure of great effort on the part of the workers in the past, one third of the populaton of the United Kingdom (about 13 millions) are either on or below the poverty line, despite the fact that the wealth of the country, all produced by labour, has increased enormously ; that, in. brief, relative to the wealth of the country, the position of the working-class is not only no better than it ever was, but as a matter of fact is worse. They say that this result is due to the ignorance of the workers, who, because they have not understood their position as a class, have, under the leadership of men equally ignorant, concentrated their efforts tipou securing some alteration in what are really effects of the private ownership of the means of life, and have not gone to the root of the matter at all.

They say finally that the results must always be the same until the workers have fully realised where their real interests lie (have become class-conscious), and have organised their forces specifically for the complete overthrow of the present system of production and the establishment of the Co-operative Commonwealth ; have refused to longer waste their energies upon securing reforms, and have determined to substitute ownership and control of the means of life by the whole people for the present private or individual ownership and control.

That is the plain issue that The Socialist Party of Great Britain presents. Is it clear ? Do you see your way ?