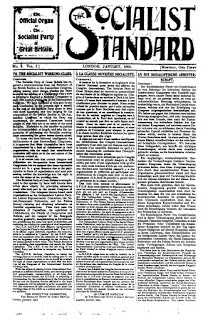 From the January 1905 issue of the Socialist Standard

And now it is pertinent to ask: What part are the clergy playing in this gruesome drama? The severest critic should not deny the numerous kindly offices in smaller matters which they constantly perform, all should unite in crediting the rectory and the vicarage with being the centres to which the weary and heavy-laden instinctively turn, there to receive not only the creature comforts of an hour, but consolations in the sorrows and assuagings of the griefs against which no material wealth is a barrier, nor robust health a guard. Of almsgiving and charity organisations there is no end, but the roots of the evil are too deep to permit of charity being a cure. There would be little need for charity if all had justice. The wealth of the mansion is the product of the dweller in the cottage, and the labourer is not only worthy of his hire but of all that he earns, and if that were paid to him there would be nought left for the landlord, and no occasion for the dole.

It is imperative, therefore, that it be asked in this assembly: Are the clergy on the side of the poor and lowly against the mighty and the rich ? Do they advocate as they should the causes of the people who cry for better houses, and better wages, and better opportunities of living Christian and moral lives? Do they preach contentment to those who are wronged, and who should not be content? Is mediation sufficient where the disputants are so unequal as are the toiler of the hut and the lord of the castle ? Do they palliate evils which they might assist to destroy, or condone with the wealth-getting which they should denounce ? How many have the temerity to reprove a rich parishioner who has treated his labourer badly, as he would reprove the labourer who has served his master badly? The present social and commercial system would not allow of the interference, and willing martyrs are none too common; and so we have to face the question : Is that system based on justice and right ? Is it moral and Christian that one man should seek toilsomely a bare, miserable subsistence, while another enjoys, with never an effort to produce it, extremest luxury ? If it be not right, let us seek a peaceful and constitutional remedy.

In every country in the world today there is rapidly growing a movement consisting of those who say that production should be for use and not for profit; that it is competition and the absence of mutual interests which make the millionaire on the one hand and the thousands of casual labourers on the other; that it is possible and desirable to abolish both by the introduction of national co-operation ; and by the placing of all industries under governmental control. For if it be worthy of the attention of great departments of state to devote their abilities to the organising of armies and navies or post-offices, how much more desirable is it that similarly powerful departments of state should direct and control the unceasing and imperative production and distribution of the necessaries of life ? With the national control of labour, every able man would be sure of the opportunity of being employed, and those who were not employed would be known to be by nature and inclination idlers.

And that system will surely come when the people have been taught to say "We will it;" and in that time the Churches and the teachers may work with more hope of fulfilling their exalted mission, and prepare the world for that more ideal time, when it shall be said in the newer England, as it was to those old-time casual labourers in distant Gallilee, We "will give unto this last, even as unto thee."

A bit of a curio to appear in the Socialist Standard, to say the least. This passage from the excerpt obviously indicates that what Mr. Manson is edging towards is a form of state capitalism:

"and by the placing of all industries under governmental control. For if it be worthy of the attention of great departments of state to devote their abilities to the organising of armies and navies or post-offices, how much more desirable is it that similarly powerful departments of state should direct and control the unceasing and imperative production and distribution of the necessaries of life ?"

I'm guessing the purpose of the excerpt was more to do with highlighting the hypocrisy of much of the Church, and also to show up the weakness of church charity as a means to tackle widespread poverty in Britain (and elsewhere).