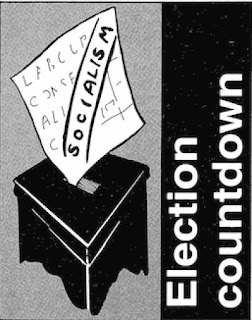 Last December the Labour Party unveiled its new military policy in the form of a glossy pamphlet bearing its new symbol — what seems to be a rather pinkish rose — and the appropriately patriotic title The Power to Defend our Country.

For those harbouring any last illusions about the Labour Party's anti-militarism, it's a revealing document in which the Tories are accused of being "disarmers by stealth" who have "crucially weakened" the "core of our armed strength". The Royal Navy, the Labour Party complains, "now has no ship dedicated to carrying large numbers of Royal Marines and their helicopters" while the Army "is set to lose a terminally guided anti-tank rocket, a scatterable mine rocket, a battlefield electronic warfare system as well as improvements to existing tanks and, possibly a new tank".

All this, we are told, because of Thatcher's fixation on nuclear weapons and decisions to buy the "appallingly expensive" Trident intercontinental missiles from America to replace the outdated Polaris missiles currently carried by Britain's four nuclear-armed submarines. Labour, the document says, intends to "cancel Trident, de-commission Polaris and remove all American nuclear weapons in this country". The money saved on Trident will be used to enhance NATO's "conventional capacity" of destruction:

Britain will contribute towards that enhancement by committing the sums saved on Trident towards additional conventional strength.

The message is clear enough: Labour intends to maintain, indeed increase, Britain's "armed strength" by building up its arsenal of so-called conventional weapons. Or. more brutally, Britain's military power of destruction will be maintained but will be composed of conventional rather than nuclear weapons and the money wasted on Trident will be wasted instead on ordinary warships and warplanes, on bombs, rockets, missiles, tanks and battlefield electronic warfare systems.

This contrasts of course with what CND, and many Labour Party members and supporters, want: to spend the money saved on Trident on schools, hospitals and peacetime industries. The Labour Party's current military policy is, however, a literal if somewhat cynical interpretation of what CND demands: mere nuclear disarmament.

When CND was formed in 1958 they told us that nuclear weapons were so dangerous that we should drop everything else and join their single-issue campaign to get rid of them. The Socialist Party replied that, although we too were appalled by nuclear weapons, it was a waste of time to drop campaigning for socialism so as to campaign just for nuclear disarmament. We pointed out that arms, including nuclear weapons, only existed because capitalism was a war-prone society and that the only solution to the threat of nuclear destruction was to replace world capitalism with a socialist world of common ownership and democratic control. We added that, even in the unlikely event of nuclear weapons being abolished on a world scale, conventional weapons would still remain and that these too were capable of wreaking mass destruction and of killing millions and millions of people as the first and second world wars had shown; that, in fact, to accept capitalism while opposing nuclear weapons (as CND was in effect advocating) was to favour conventional weapons since the very nature of capitalism meant armed states squabbling over markets, trade routes and other economic matters and therefore the need for some kind of armaments as long as capitalism lasted.

As we put it in an early article on CND. "to campaign for nuclear disarmament implies acceptance of so-called conventional armaments" (Socialist Standard, August 1960). Some CND supporters replied that this was unfair, but the revived CND of the 1980s took up precisely this position, as the Labour Party has now done with a vengeance, not only accepting conventional weapons but even praising them as more effective than nuclear ones. 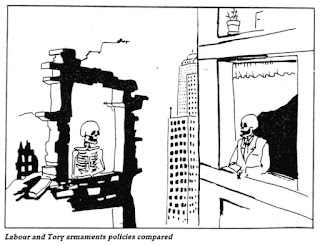 It should not be thought, however, that the Labour Party is against all nuclear weapons. Its new policy document commits it only to abandoning Britain's submarine-carried intercontinental nuclear missiles. It does not propose the abandonment of nuclear weapons by the NATO military alliance, which the post-war Labour government took Britain into and full support for which is reaffirmed in the document. Nor does it say what it intends to do about Britain's tactical, or battlefield, nuclear weapons such as what might be called the conventional H-bombs carried by RAF Strike Command and the nuclear depth charges carried on some Royal Navy ships (some of which were being transported by the convoy involved in the road accident in Wiltshire in January).

The Americans also understand that we are not asking them to dismantle their strategic nuclear weapons.

So American, but not British, submarines armed with Polaris and Trident missiles can continue their patrolling with the blessing of the Labour Party.

As to the American cruise missiles, it is true that Labour now says it will "remove" them from Britain but this is easier said than done since the decision to install them was a NATO decision and the other NATO members, especially those that have already accepted such missiles (Norway. Germany. Holland. Belgium and Italy), are likely to bring enormous pressure to keep them in Britain too. Already Labour's shadow Foreign Secretary. Denis Healey, has started to hedge on this issue, saying that it is “not inconceivable" that some American nuclear missiles could remain in Britain under a future Labour government.

In any event, where would these cruise missiles be removed to? To Germany, Norway, Belgium, Holland and Italy? In which case the Labour government would be taking up the same hypocritical position as their fellow partisan of the pink rose, President Mitterrand of France, who supported the deployment of US cruise missiles in Europe — as long as none went to France.

That the Labour Party should have a — to say the least — ambiguous policy on nuclear weapons should come as no surprise in view of their past record:


If the present Labour leadership has chosen not to fight, fight and fight again to change conference decisions against the British Bomb, this is because they know they have no chance of winning as in the 1960s. Some of them may even be genuinely convinced that British capitalism has no need to possess the independent power to annihilate Moscow in order to be able to negotiate from a position of strength in conflicts with other capitalist states, but that an enhanced conventional strength would be sufficient. They may well be right but that's not our problem so we'll let the parties aspiring to run the affairs of British capitalism — Labour, the Tories and the Alliance — settle this issue among themselves.

But one thing is clear. Anybody who may be tempted to vote for the Labour Party as being in some way less militaristic than Rambo Reagan, David Owen and the Iron Lady have been forewarned by the Labour Party itself. Labour fully accepts the logic of capitalism that states must arm themselves with the most destructive weapons they can afford in order to be "credible" in the international conflicts that arise all the time under capitalism over markets, trade routes, sources of raw materials, investment outlets and the strategic points to protect these.

Labour has no intention of sending Denis Healey naked into the conference chamber. Those the pamphlet calls "our potential enemies" will be spared that horrible sight, because Healey will be fully clothed with all the deadly conventional weapons needed to uphold the bargaining position of the British capitalist class whose interests he would be representing.
Adam Buick