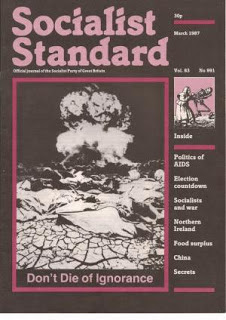 The next general election might well be the last one before the next world war. Within five years from the date when you cast your next vote you, your family, your friends and all of the surrounding environment could be victims of this system's ultimate madness: the mass annihilation of modern war.

It requires no crystal ball, no advanced degree in foreign policy, to observe that the "healthy competition" of capitalist rivalry is becoming more vicious and ruthless as the weeks go by. In 1986 the governments of the world spent a record £634 billion on armaments. That amounts to £1.2 million every sixty seconds of the day and night. The increase in militarist expenditure last year was greater than in any previous year — ever. The foolish and the fearful might delude themselves that these weapons will never be used. The reality is that they are being built for use, the reasons for their use are increasing and it is only a matter of time before capitalism blows us up. Such a holocaust may not be the intention of the superpowers. But new superpowers, armed with their own weapons of mass destruction, are fast arriving on the scene. Militarist accidents are ever more likely. The ticking of the clock as the moments lead up to the next war is all too audible to those whose fingers are not placed tightly in their ears.

All of the major parties have "defence" policies which are really war policies. Or. to be blunt about it. they are strategies for killing large numbers of people. That is what they are doing when they ask you to vote for their "defence" policy: choose their strategy for murdering people you have never even met in preference to that of the next party. To vote for these parties is to become a willing accomplice in the preparations for mass murder. The absurd deterrence strategy is best described by the dictum. "If you want peace prepare for war". That is the policy accepted by most of the parties aiming to run capitalism. It is like saying if you want virginity among teenagers build brothels in the schools. You do not achieve peace by preparing for its opposite: if you prepare for war there will be a war. 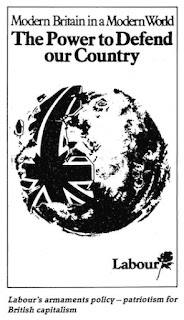 Nobody should be taken in for one minute by the Labour lie that they are presenting a more peaceful policy. On the contrary. theirs is an alternative war policy — a policy dependent on conventional methods of murder being used by Britain, while at the same time remaining in loyal alliance with the NATO nuclear murder gang. It is like a gang of muggers saying that in future they will give up using knives and will rely on beating people up with wooden sticks. But at the same time they will remind their victims that their friends in the bigger gang still have knives. If anyone votes Labour in the belief that conventional weapons are about decent warfare they should go and talk to the conscript soldiers of Iran and Iraq, or the victims of the Falklands war. In their document. Modern Britain in a Modem World, the Labour Party states that

. . . we must defend ourselves effectively by land, sea and air. And fully participate in NATO. The best defence relies upon troops, ships, aircraft and tanks.

If that is peace talk they have a perverse conception of peace. The next election will be the first one ever in which the Labour Party has competed for power against the Tories on a manifesto of promising to spend more on weapons than its opponents. Labour concedes that its war policy will cost more than that of the Tories. Would you vote for that as a means towards achieving peace?

Wars are not the result of workers in Russia failing out with workers in the USA. Most of the British workers who unthinkingly accept Labour’s line that "we must defend ourselves effectively" do not have any enemies in Moscow or Prague or Berlin or Tripoli. Most workers in Britain have never met a Russian, let alone fallen out with one sufficiently to want to blow them up. Most Russians have never met an American. If you repeat a lie often enough people may begin to believe it and so they keep on telling us that we must be defended against the Russians. After a while "Russians" are seen as monstrous, threatening, inhumane beings, fit only for nuclear attack. And to Russian workers, indoctrinated by the same lies from their owning class, we are perceived similarly as a wicked enemy. What you must never forget — because when you have finally forgotten it you are finally brainwashed — is that there is nobody out there you need to kill and there are no enemies out there with a grievance against you. War is not about our interests, but those of the bosses who rob us so that they can be rich and powerful. War is about the competition between capitalists. If we are to die it will be for them. Ponder that as you are asked to cast your vote for one of the " defence"" policies.

The Socialist Party is the only party in Britain standing in the next election on a policy for peace. Not peace by means of building more bombs or building nice bombs or painting the bombs red or negotiating with capitalists for a delay in the moment of war. The Socialist Party stands for the abolition of all of the weapons of war: Cruise missiles. SS20s. plastic bullets. Exocets, the lot. We present ourselves to our fellow workers in the next election on the basis of the following propositions:

Capitalism is the cause of war in the modem world. The Socialist Party is unequivocally opposed to the worldwide capitalist system. We are opposed to it in Russia and China just as much as in Britain and the USA. The rivalry over profits, trade routes, markets and raw materials which is generated by capitalism makes war inevitable. It follows from this that you cannot seriously oppose war unless you are out to end capitalism. It is futile to attempt to remove an effect without removing its cause. The Socialist Party calls for votes from workers who want to end the capitalist system. There can be no other starting point for removing the threat of war.

Workers have no country. Nationalism is based on the lie that workers have their own country: that the British have an obligation to Britain and the French to France. Workers who do not own or control Britain have no obligation to the bosses who do own and control it. Our sole interest is in co-operating with our fellow workers across the world who also have no country. Why should we die defending what is not ours? On the contrary. our object is to obtain what is not ours: the world and its resources. The class war — between the parasites who possess and the workers who produce — is the real struggle that need concern us. And to win that we need not initiate the violence which is characteristic of capitalism. The workers are the majority and once we unite there is no force that will stop us taking the earth into our common possession.

Socialism will allow humankind to co-exist in peace. There is nothing natural about war. In fact, peaceful co-operation is more fitting for human beings who are conscious and potentially rational beings. Once we live in a world of common ownership and democratic control of resources there will simply be no reason to kill each other. No Empires to build or markets to expand or profits to increase. Socialism will be a social system in which war will be pointless, peace will be the norm. There will be no socialism without socialists to bring it about, just as there will be no capitalism or war without workers to support such insanity.

Stop and think when you cast your next vote. Think of the peace which could come about and think of the screams which are the human sound effects of war. Think — for your own sake, think hard.