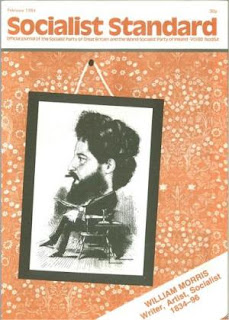 From the February 1984 issue of the Socialist Standard

Socialism means far more than the mere satisfaction of material needs; creative, emotional and intellectual life will also be given full expression. It is for this aspect of the socialist case that the subject of work has particular relevance. William Morris said in one of his lectures, "if pleasure in labour be generally possible, what a strange folly it must be for men to consent to labour without pleasure, and what a hideous injustice it must be for society to compel most men to labour without pleasure.” (Art under Plutocracy, reprinted by us as Art, Labour and Socialism) The fact is, most workers do consent to labour without pleasure, in so far as they continue to give their support to capitalism which is the cause of all the problems surrounding work — the boredom, the pressures, the insecurity.

In all forms of society the requirements of life must be produced; work therefore is a nature-imposed necessity. The kind of work, the techniques and conditions under which it is done, depend on the stage of development society has reached. For example, capitalism requires arms production, with armed forces, a legal system with a police force, commerce, banking, buying and selling, but none of these activities would have any place in socialism. It is necessary that we study work in relation to society for only then will we understand how socialism will change our whole conception of work and what it will mean.

Capitalism has certain unalterable basic conditions of work that will remain until the system is abolished. Those conditions are — that work takes the form of employment requiring workers to sell their mental and physical energies — their ability to work — to an employer. In doing so, they surrender themselves to the direction and control of others. They work from economic necessity, not for pleasure, nor to express themselves. Workers do not own the tools and instruments with which they produce; they are owned by the capitalist class, and may only be used, with the consent of the capitalists, when they think it is profitable to do so. Workers have no say in the matter. Consequently, in the face of modern technology workers feel threatened by mechanisation and automation. and by the over-organisation of their lives and the dull conformism that it demands. The very thing workers produce is not for their use and satisfaction; it is for selling with a view to realising profit. It is a commodity which faces workers in the market as a force obeying only economic laws, with no concern for their wellbeing.

These basic conditions of work under capitalism ensure that workers have little or no control over their working activity, yet control is of the very essence of work satisfaction. Most writers on the subject, whatever their other disagreements, stress the need for autonomy in work. Under capitalism, therefore, workers produce only as a means to an end — to earn their living, to reproduce themselves as workers. They do not produce for the intrinsic nature of the work, to develop freely their mental and physical energies. Workers are alienated not only from the means of production and the product, but also from the very act of working.

The economic base of socialism will be the common ownership and democratic control of the means of production by the whole of society, not a privileged section of it. The wage-labour and capital relation will no longer exist, therefore work would not take the form of employment. In dealing with socialism we can no longer speak of workers, only of freely associated people who own the social means of production in common, who produce for use and satisfaction. Production would no longer control the producers: at last they would be in control.

Capitalism has developed co-operation of labour, but only in the individual place of work, not in society at large. Socialism will be the highest state in co-operation and organisation of social labour. The lone individual can accomplish little; only in co-operation with others will individuals fully realise themselves.

Work will be an end in itself, done with the decision and inclination of the individual, not from external pressure. No longer will the same task have to be performed for a life-time through economic necessity. There will be great variety in occupation, which is important for work satisfaction, and greater efficiency.

Modern technology demands for its most efficient use interchange of activity, yet capitalism confines workers to small details of production, leaving them ignorant of other aspects, unable to adapt to the constantly changing needs of technology, as acquired skills are made redundant. When people spend their lives engaged only in fragments of production, they can only develop as a fragment, not as whole people. Thus capitalism cannot make full use of the technology it has created.

Socialism will be very different. The means of production will be used to the best advantage of all members of society. The productive process will present a whole variety of occupations, allowing people to move from one activity to another. Everyone will have opportunity to develop a range of skills and knowledge; thereby people will gain an insight into the productive process as a whole, instead of only tiny fragments of it. Society and individuals will work in direct relation to human needs; this is what having control over production means. Work will take on a completely different meaning; it will contribute to enriching the experience of life. No longer will it be a drudgery.

The objection may be raised that this all sounds fine, but even in socialism much unpleasant and boring work will still need to be done. Who would do the dirty and dangerous work? Well, most of it would be done with the aid of machinery, as Oscar Wilde said in The Soul of Man Under Socialism:

All unintellectual labour, all monotonous, dull labour, all labour that deals with dreadful things and involves unpleasant conditions. must be done by machinery.

Or more recently Lisl Klein in The Meaning of Work:

Technically there is probably very little which could not be done in the way of reorganising work so as to abolish those aspects of work which it might be demonstrated are harmful to the people doing them.

If there still should be awful work to do, we can only echo some more words of William Morris “. . . if there be any work which cannot be but a torment to the worker what then? Well then, let us see if the heavens will fall on us if we leave it undone” (Useful Work versus Useless Toil).

Handicraft is stressed throughout Morris's writing as a means of achieving happiness and satisfaction in work. He writes in an article, the Revival of Handicraft:

We do most certainly need happiness in our daily work, content in our daily rest, and all this cannot be if we hand over the whole responsibility for the details of our daily life to machines and their drivers. We are right to long for intelligent handicraft to come back to the world which it once made tolerable.

But Morris was not against machinery, only against how it is used under capitalism. In speaking of unpleasant labour he writes: "If machinery had been used for minimising such labour, the utmost ingenuity would scarcely have been wasted on it" (Art under Plutocracy). Indeed, socialism is possible because the forces of production are developed to the point of potential abundance, which implies a high degree of technology. But socialism will have handicraft production as well. Some things that are now made by machines may be made by hand and vice versa.

Work involving the production of food, clothing and shelter is necessary whatever form society takes. Other kinds of work, such as composing music, painting, scientific research, may be done for its own sake. It is sometimes argued that if the necessary work could be limited to as short a time a possible, there would be more time to pursue the more satisfying. However in terms of fulfilment the distinction could not exist. For example designing and building a house is very necessary; we must have houses, but it can also be a very creative form of work in itself. Also, producing something we know to be useful is itself a contributing factor to work satisfaction. Again, painting serves no vitally useful purpose in that it does not feed, clothe or shelter us. But as long as people desire works of art, are they not also useful?

William Morris gave the following definition of art: "The thing I understand by real art is the expression by man of his pleasure in labour” (Hopes and Fears for Art). One thing is certain: if we are to gain real pleasure in our labour we must be in control of our productive activity, but since this is an impossibility within the framework of capitalism, the only possible way to achieve this is through socialism.
P. B. Young
Posted by Imposs1904 at 9:50 AM

Email ThisBlogThis!Share to TwitterShare to FacebookShare to Pinterest
Labels: Alienation, February 1984, Human Creativity, Oscar Wilde, P. B. Young, R1984, Who will do the dirty work?, William Morris, Work in Capitalism, Work in Socialism