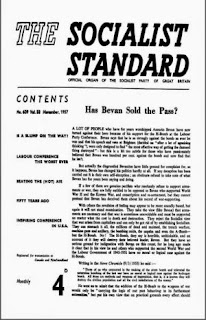 From the November 1957 issue of the Socialist Standard

There are quite a few millions who have never yet made contact with the Socialist Party of Great Britain, although there are millions who scan the popular Press, in the columns of which the words Socialist, Socialism. Communist and Communism are daily used when commenting on world events.

The important point we emphasise once again is that the popular Press never defines these terms, invariably associated as they are with the Labour Party or the Russian Communist Party. The Socialist Party of Great Britain on the contrary has consistently stressed that the use of these terms has no relation whatsover to the Socialism which we advocate. We define what we mean by Socialism, and this definition is displayed on all our publications.

“Think of it—!” Also the Socialist Party has likewise persistently pointed out that the Labour and Communist Parties are purely social reform parties. These parties do not advocate Socialism or Communism. Consequently, therefore, we have always opposed their policies as confusion; as a betrayal of working class interests, because only through the establishment of Socialism can emancipation from the wage slavery of Capitalism be accomplished.

But the popular Press voices the interests of the Capitalist property owning class, and by persistently confusing its readers with the use of the words Socialist, Socialism, etc., in relation to the Labour and Russian party policies, they render a signal service to the ruling class.

There are, however, amongst the working class many who do appreciate the distinction which we have so far outlined, but who nevertheless are still unconvinced of the need of associating themselves actively with the work upon which [we] are engaged. To these, therefore, we repeat our appeal to more closely consider our claim. We recall again, therefore, a few of the more outstanding facts concerning our activities down the years.

For instance, this journal has appeared without a break, despite the difficulties of the war years, since 1904. Further, this publication has been supplemented with numerous pamphlets dealing with the more important events and phases of Socialist criticism. In the two world wars, for example, our opposition was clearly and promptly stated, war being the outcome of international rivalry of world capitalism for the domination of the world’s markets, trade routes, spheres of influence. This is a very brief record of our efforts to win the working class to Socialism but it has, above everything else, revealed the important value of our Socialist principles, distinguishing us from all other political parties. These principles, guiding the Party towards its Socialist objective, are as sound today as when they were first published; they have been the touchstone which has enabled the Party, through the most critical and testing rimes, to declare, without hesitation, its policy in relation to the circumstances and events of those times.

Down the years again, in season and out, our representatives have advocated Socialism as the only alternative to this “thieves' kitchen “—the capitalist system. Times and circumstances have changed, but despite the “Welfare State,'' in which the working class are being deluded into believing “that all is well now,'' they are still faced with a constant struggle, through their various industrial organisations, in the attempt to maintain adequate living standards. Slums galore still exist throughout the land, and the constant threat of another world war hovers over their heads like a nightmare.

Today, therefore, we are attempting to contact the working class in various districts through the medium of organised canvassing, and we plead for your sympathetic consideration to the claims of these canvassers to hold your attention for a few moments. In this respect you can render invaluable help, so that possible meetings may be planned in your locality to enable us to state more fully the case for Socialism “ Think of it! “ This is all we ask, and having thought, we are convinced that you will soon be wanting to help us in our task.

Finally, the establishment of Socialism is not just a utopian dream, but a commonsense practical proposition. This frustrating cut-throat economic capitalist system which daily haunts working class life can be replaced by a more humane social order, Socialism, in which there will be an opportunity for all to give according to their ability, and to receive according to their need. Beyond this there will open out prospects for each and all to cultivate whatever latent talents they possess, which capitalist exploitation for profit, today denies. No longer will the nation’s youth be called upon to engage in senseless fratricidal fighting, but on the contrary inspired to play its part with every member of the community in establishing social relationships whereby the world's populations may live in peaceful harmony.

There are vast and incalculable potential power resources in existence today sufficient to ensure a free, happy and abundant life for the whole human race under the common ownership of such possibilities. “ Think of it!

Billy Iles wrote under the pen-name of 'O.C.I.' in the pages of the Socialist Standard.