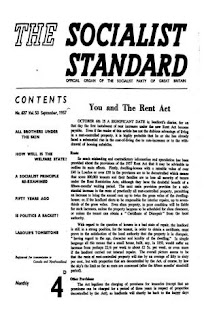 Editorial from the September 1957 issue of the Socialist Standard

When Socialists say that the workers in all countries ought to get together because they all suffer the same kind of hardships, live under the same social system and have the same interest in establishing Socialism, our opponents give us a curious medley of answers. From one quarter we are told how different the "British way of life” is from the way foreigners live—and how much better. From other quarters the story is that some foreigners are so much better placed. But just how different is the way different countries are managed? Look at wages, for example. In every country in the world, and at all times and irrespective of the political label of the rulers, you can be quite certain that those rulers will be saying that their hearts bleed for the workers, and that they believe in higher wages, but that just at present they cannot do anything about it because things are not going too well and the country cannot afford it.

You will also find that in each country there will be no difficulty at all in finding vast sums of money for armaments.

Again, if the workers get tired of waiting and come out on strike, you may be quite sure that the Government will oppose the wage demand and try to break the strike. Two countries have just been in the news, India and Poland. In India the Post Office workers demanded more pay and had been demanding it for quite a long while. The government refused it and made the usual plea of not being able to afford it, though they can afford armaments in plenty, and are reported to be considering making the A-bomb. The Post Office workers decided to strike, and were promptly met with drastic action by Mr. Nehru, the Prime Minister, in the form of an anti-strike Bill rushed through Parliament in a few days. “Those taking part in illegal strikes will be liable to imprisonment, or fines, and may be arrested without warrant." (Manchester Guardian, 8th August, 1957.)

So the strike was called off and the government has promised to set up a pay commission, which is taken to mean that there may be a small increase of pay.

And Poland
If the “new” India shows just the same kind of government resistance to wage claims as does Britain, what do we find in “new" Poland?

On Monday, 12th August, the bus and tram men in Lodz, second largest city in Poland, came out on strike for higher pay. The Daily Worker (14th August, 1957) published a report from their representative in Poland which admitted that the tramway workers have been preparing for the strike for weeks, and that the Polish Government is agreed that the men's demands “are not exorbitant, having regard to living standards, but they simply cannot and will not be met because the country cannot afford them."

The Daily Worker, which has been kept busy in recent months declaring support for strikes of workers in Britain, including bus workers, did not support the Polish strike. It admitted, but did not condemn, the use of militia in the strike. The Daily Worker reported as follows:—

"The militia, to disperse the workers and avoid inviting trouble, threw tear gas capsules, not bombs. There were no fights between the militia and the workers. The troops were not called in, although among the lorries mobilised for various institutions to carry people to work, one-third were military vehicles driven by soldiers."

Apparently the people of Lodz were not as much comforted as the Daily Worker correspondent by receiving tear gas out of capsules instead of out of bombs, for the Daily Mail correspondent in Lodz reported the following conversation:—

“The minister of Local Government, Stanislas Sroka, tried to persuade the strikers to break up their demonstration and return to work. They defied him. One woman, waving a tear-gas cartridge in his face and wiping tears from her eyes, demanded: "Is this what you use against women?” (Daily Mail, 13th August, 1957.)

But after the Polish authorities had resisted the demands that led eventually to the strike, they partially gave way and made the offer of a small increase, which the strikers regarded as insufficient. The amount offered would have cost £4,000,000, according to the Daily Mail (13th August, 1957).

One other detail of the Polish strike must surely make the British worker think that the government in Poland must be like that in Britain. When governments nationalise railways, buses or other services and industries, they always tell us that these things now belong to us. But members of the government habitually behave as if the nationalised undertakings belong to them, and it has a familiar ring, therefore, to learn that the Polish Minister of Local Government declared: "The tramways belong to the State, not to you, and they will run."

All the countries have capitalism, and all the rulers are brothers under the skin when it is a question of opposing workers’ wage claims.
Posted by Imposs1904 at 8:52 PM